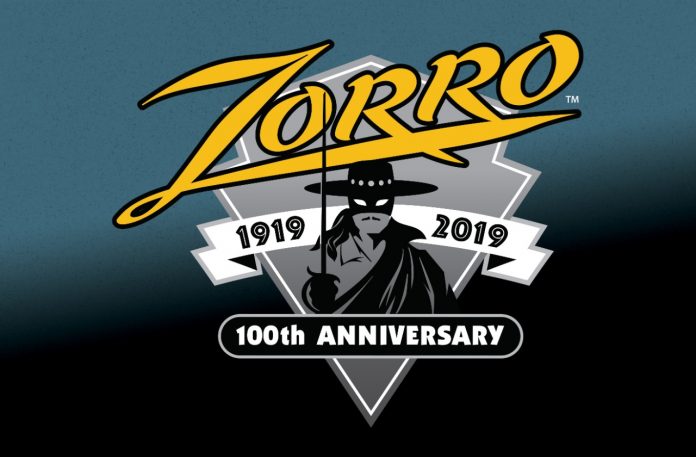 Zorro! Who doesn't know this masked hero who fights for justice in California?
You may never have read or watched anything about the character, but you've certainly heard about him somewhere.

For comic book fans, it is undoubtedly a reference to the tragic night that Bruce Wayne's parents died shortly after watching The Mask of Zorro. Film fans will be able to remember Antonio Banderas playing the character.

In literature, Zorro by Isabel Allende, and the oldest, like this one who writes, Guy Williams' eternal smile with his cape and sword protecting the oppressed and laughing with Sergeant Garcia.

Well, A Raposa celebrates its 100th anniversary this August and we are preparing a special on the character that during the 20th century and still in the 21st remains firm in world pop culture.

Soon Zorro will return in several ways, with a new series, Escape Room, and other news.

-> Remember the story of Zorro

And long live Zorro! Oops, but it doesn't end here, check out our first interview with Scott Cherrin that talks about the character's story. And keep an eye out, as we still have more stories coming out soon.

Thunder Wave: What were the reasons that led to the creation of the character?

Scott: While we can't say for sure what the creator, Johnston McCulley, was thinking when he created the character 100 years ago, we think he may have been inspired by Baroness Orczy's Scarlet Pimpernel and Alexandre Dumas's Count of Monte Cristo. As Zorro was referred to as California's Robin Hood, Robin Hood may also have been an influence. Others speculate that he may have been inspired by the bandit Joaquin Murrieta. However, Zorro has so few parallels with any other previous characters that McCullley should be credited for creating a totally original character. While McCulley sold his first fiction story to Redbook Magazine just out of high school, in his early years McCulley was a journalist and foreign correspondent. He worked as an Army Public Affairs Officer during World War I and was a police reporter for the Police Daily, the Los Angeles Herald and the Los Angeles Times. McCulley was considered a history buff and was considered an authority on California history after his death in 1958, which adds credibility to Joaquin Murrieta by being an inspiration. Many of his stories were set in California.

Thunder Wave: Superman is called the first superhero. But many argue that O Sombra, created in 1931, should carry this title. In reality, wouldn't Zorro be the first great hero?

Scott: We certainly think so, considering that Zorro first appeared in 1919, well before O Sombra. Zorro was the first modern hero to possess and perfect all the characteristics of a great hero (a secret identity, fantasies and secret lairs in the form of a cave, great feats of strength and athleticism and protection for the common man). Naturally, he has been cited as inspiration for later heroes like Batman, each of whom has these elements firmly established in the legend of Zorro.

Thunder Wave: What makes Zorro still so current today, even though he is a character with stories from a century that for many has already become folklore?

Scott: The fox continues because he is a "common man" - almost everyone can relate and aspire to his search for justice. Zorro's powers are his wit, humor, physical strength and ability to endure and thrive in the face of adversity. Zorro does not use violence to go after the villains. He almost never kills anyone. It just humiliates - putting villains in their place, often with humor. He is a charismatic Latin hero, always in fashion dressed impeccably in black - men wanted to be him and women wanted to be with him, long before James Bond.

Thunder Wave: How was the character's arrival on the screens for the first time? Did the American public welcome you, since you are a character with Mexican characteristics and Spanish roots?

Scott: His arrival on the screen in 1920, 'A Marca do Zorro', starring Douglas Fairbanks, was very well received. It is said that on the opening day, in 1920, it brought the highest single-day box office of any film at the time. As Zorro has always attracted the market in general, and the American public may not have thought of him more as a Californian than as a Hispanic at the time, but the public certainly loved the Spanish flavor, romance and fictionalized passion in Zorro's stories and films.

Thunder Wave: We can see that the hero was already fighting alongside the Indians and Mexicans in his time, while other films and media still showed these two ethnic groups as the great villains. Did your creator already have a vision well ahead of his time, like Gene Rodenberry, creator of Star Trek about peoples?

Scott: As the creator of Zorro died more than 60 years ago, we cannot say what his vision was when he created the character. We know that Johnston McCulley wrote Zorro's first story, the Capistrano Curse, in 7 days when Zorro / Diego reveals his double identity to everyone. Although the weekly story was probably not an ongoing series, the inclusive “justice for all” themes continue to resonate with audiences around the world today. From pulps to the present, Zorro has always struggled to defend ALL people, not just those of his same class or ethnicity, making him a more inclusive hero from the start.

Thunder Wave: Many heroes today are "accused" of sexism and machismo, like James Bond, but we don't see that happening with Zorro. Is this because the hero was from Disney?

Scott: Zorro has always treated women with respect. The Mark of Zorro with Tyrone Power (1940) is a good example - long before it appeared on the Disney TV show in the 1950s. However, Guy Williams's portrait of Zorro at the Disney show probably helped to consolidate his reputation as a chivalrous character.

Thunder Wave: Why did Walt Disney buy the character?

Scott: Walt Disney has long had a fascination with historical figures. Disney had great success with Fess Parker as the character Davey Crockett. Johnston McCulley had a great theatrical agent - Mitchell Gertz - who brought the rights to Walt Disney, convincing him that Zorro would make a great TV series - based on Davey Crockett's success. Zorro was Walt Disney's first TV series.

At the time, the Disney Zorro series had the largest budget of all Western series (there were 27 in 1959) on television - a budget more than double that of most series at the time. An important motivator for Disney to go on television was an ABC commitment to help fund its Disneyland theme park in Anaheim. Disney also used its theme park to promote the Zorro series, with several live appearances by the cast that began on the roofs of Frontierland. The first season in 1957 was a huge success, with an average of 35.7% from the audience each night - about 35 million viewers watched the program each week, reaching 38.9% in the second season.

Thunder Wave: Many characters in their stories, such as Sergeant Garcia, are fondly remembered by fans. Which of these were actually created by Johnston McCulley and which appeared only in other media and ended up entering the mythology of Zorro?

Scott: The characters we know and love, including Zorro, Don Diego, Bernardo, Don Alejandro, Sergeant Garcia and Frei Felipe were created by Johnston McCulley. They have always been a big part of the classic Zorro, from the pulps to the most recent films. However, it should be noted that Sergeant Gonzales, a dreaded brute from the early pulps (and the Marca do Zorro films) often gets confused with the fat, lovable and not-too-brilliant Sergeant Garcia who was first introduced in the stories of the McCorley's Zorro, published in the 1940s West Magazine. The Captain Monastary archetype, popularized by the Disney TV series, appeared somehow in each iteration, as Monastary was composed of several evil military officers who appeared in McCulley's pulps .

Thunder Wave: What is the difference of the Zorro created by Johnston McCulley for those who came after?

Scott: Although the iterations of the film and TV helped to translate the look, elegance, charm and romanticism of Zorro with which we identify today, it is no coincidence that Zorro means “Raposa” in Spanish… Raposa is defined in the Merriam Webster dictionary as “Intelligent, astute person, who is deceived by naivety, or cunning - deceive”, not to mention 'a good looking young man or woman', as well as archaic 'sword'.

In the pulps, as well as in Republic Serials *, Zorro also had a gun. Since the Disney era, Zorro has not used a gun, although we have a license to produce a Zorro Tribute Revolver, reminiscent of one used in Republic Serials. Much of what we consider Zorro's classic today, stems from the Disney version that set the tone for the future.

Disney's Zorro was actually less loving than the McCulley and Mark Zorro films. In fact, Jolene Brand was added to the cast in season two to create a female love interest.

Thunder Wave: Who is Zorro for you?

Scott: Zorro has become synonymous with black, his mask, Cordoba hat, sword, whip, the trademark "Z" and his powerful motto "Justice for All". Swing your finger in the air three times to form a Z and everyone in the world, regardless of age, knows you're talking about Zorro. He is a very brave swordsman - the champion of the people always making friends with the weak, the poor and the peaceful. As Zorro proclaims at the opening of the Disney series "My sword is a flame - to ignite all errors". For me, Zorro is a legendary cultural icon that is dark, mysterious, beautiful and strong, evoking the glamor and sophistication of early California, elegance and romance combined with heroic athletics, intelligence and humor that make it truly timeless. While each generation has its Zorro, these attributes provide the essence of making Zorro inspirational - truly legendary and timeless, generation after generation.

* Subcategory of films where the protagonists are patriotic heroes such as The Spirit, Captain America, among others.

A deal between CBS and Propagate will put the beloved character Zorro back on television, but this time in a female version.
read more
Review

2019 is a year of celebration for various characters, such as Batman. Only someone older and who served as inspiration for ...
read more

Eight women who are an example of courage and struggle

12 contagion films to watch during quarantine