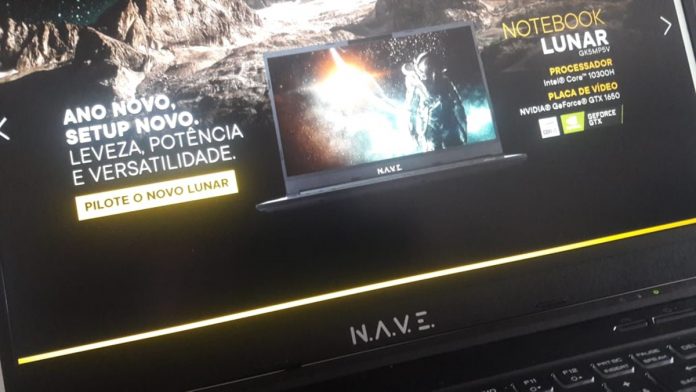 The line of notebook gamers has been gaining market share in recent years. There are several models that reach consumers eager to be able to play wherever they want their favorite games. However, there are numerous notebooks, as well as smartphones, ranging from entry-level to advanced ones.

We received the gamer notebook LUNAR SHIP, with tenth-generation Intel I5 processor, H series, in addition to having a GeForce GTX 1650, 8 Giga ram DDR4 memory, 256GB SSD and a 15 ′ monitor with 60Hz.

The LUNAR model is the entry version of the NAVE, with a configuration that seems small, but that supports very well what is asked for. For this first analysis, we did the part of reinstalling the entire operating system and other programs necessary for the notebook to run. Let's go to the test!

Back to factory version

The reinstallation of the operating system (Windows 10 64), was more than quiet. Unlike the past, it was necessary to have all the code and infinite CDs or be connected to the Internet to download codecs, among others, the LUNAR model was fast and accurate. Even the video and sound card that used to give some kind of problem, were easily recognized.

After this part, it was time to “play” and abuse the notebook. During navigation and trailers in 4K, EPIC, GOG and Steam applications were downloaded. Still browsing YouTube, in addition to adding some Rock to check the sound - which is very good, but better with headphones, as with all notes -, the model LUNAR it was put to the test to make all of this the installation, which was done without any bottleneck.

The same can be said for when we install games from Hitman 3, Cyberpunk 2077 and the Sims 4. During the game of Hitman 3, the notebook was downloading and already installing the game Cyberpunk 2077, and he kept all speed and it did not give any problem for the match with Agent 47.

USB, HDMI, among others

The LUNAR model comes with 3 USB ports on its sides, plus an HDMI on the rear, where the power cable is. Nothing that gets in the way, this HDMI input at the rear is very interesting, as it makes life easier for people who need to connect a device or TV and make presentations. Positive point for the company.

Only the sound inputs that remain in the lateral pattern. Something that could have been upgraded to the front, as with the notebook Compaq. This helps a lot for people who prefer to use headphones or microphones. Anyway, it's nothing that gets in the way, just something you can think about for the future.

For this first analysis of installations and use of equipment, yes. Even though it is a little heavy, almost 2 kg, it should be borne in mind that it is a Gamer notebook, that is, it is not a device to be carried on the lap strap at any time and for any place.

The model LUNAR it's beautiful, with an anti-glare screen, with lights on the keyboard - which are very soft -, in addition to a performance that doesn't even seem to be 8 GB. Some may also complain about the size of the HD, which is 240 GB, but for today where everything is kept in the clouds and games keep a good portion on their servers, it is totally unnecessary to spend money and space with 1 TB hard drives for up. It is best to have this space reserved for the 2 coolers that do their job very well and do not let the notebook heat up.

In our next article we will analyze the performance of the LUNAR model with the latest games on the market that require the processor and video card, as well as lighter ones, which may seem silly to some, but which most complain about being too grainy in some versions of gamers notebooks.

Analysis | Polaris NAVE notebook is Gamer in the vein!

Analysis | Polaris NAVE notebook is Gamer in the vein!