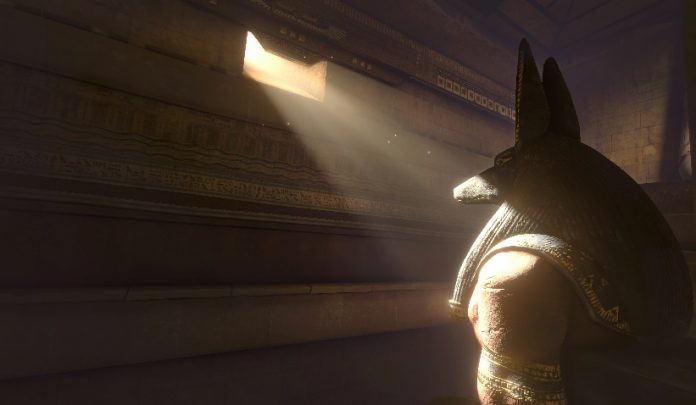 Voyager Escape Unit will open on January 30, at Morumbi Town Shopping, in São Paulo, and will present “Escape The Lost Pyramid”, an unprecedented experience in Latin America set in the universe of Assassin's Creed: Origins

Voyager, the virtual reality (VR) entertainment center of the ARVORE studio, will open on January 30, at Morumbi Town Shopping, in São Paulo, its first VR escape room, the Voyager Escape. The unprecedented experience that mixes puzzles in multiple dimensions, a lot of fun and cutting edge technology, has the partnership of one of the main studios in the entertainment industry, Ubisoft, which developed “Escape The Lost Pyramid”, a multiplayer interactive content set in the universe of game Assassin's Creed: Origins.

The new attraction is suitable for consumers of all ages from ten years old and expands the traditional dynamics of escape games, in which players have a pre-defined time to solve team puzzles and escape from a customized physical environment according to a certain story. With virtual reality features, users will experience adventures that would be impossible to replicate in real life, visit incredible scenery and have much more freedom to explore.

“Voyager uses virtual reality to offer real fun. It is a unique opportunity to immerse yourself in different dimensions, interact in a new way with friends and family, and travel anywhere, ”said Ricardo Justos, CEO of ARVORE. “We are proud to open our first escape room in VR in Latin America with the partnership of Ubisoft. There will be regular additions to the Voyager Escape portfolio and users can expect great news. ”

"Escape The Lost Pyramid" requires logical thinking, can be played in teams of two or four players with computer backpacks, VR glasses and controls, and participants are free to move around and interact with the scene in a variety of ways. Before starting the sessions, the teams receive guidance on the use of equipment and narrative. It is not necessary to be a gamer or to know the Assassin's Creed series to have fun, but Ubisoft fans will identify several references.

"Escape The Lost Pyramid reflects Ubisoft's intense work to offer innovative experiences that combine fun, cutting-edge technology and new gaming platforms," said Bertrand Chaverot, director of Ubisoft in Latin America. "It is a unique opportunity to immerse yourself in the Assassin's Creed universe and live impossible experiences in real life."

The story of "Escape The Lost Pyramids" begins in February 1928, when a team of explorers disappears on the Sinai Peninsula while trying to reach Nebka's Lost Pyramid. Nowadays, players are invited to enter Animus, a machine that allows access to the genetic memory of ancestors, to relive the adventures of the missing group and find something of great value that the explorers were looking for.

Voyager Escape is the second unit of Voyager, which already has a store at Shopping JK Iguatemi, in São Paulo, with more than twenty experiences among games, cinematics and other interactive virtual reality narratives. Voyager Escape will operate from Monday to Saturday, from 10 am to 10 pm, and on Sundays, from 11 am to 10 pm. Each session lasts up to 60 minutes and the price per player is R$84.99.

Number of participants per session: 2 or 4

On International Women's Day, HyperX exalts and honors the female presence in the gaming universe