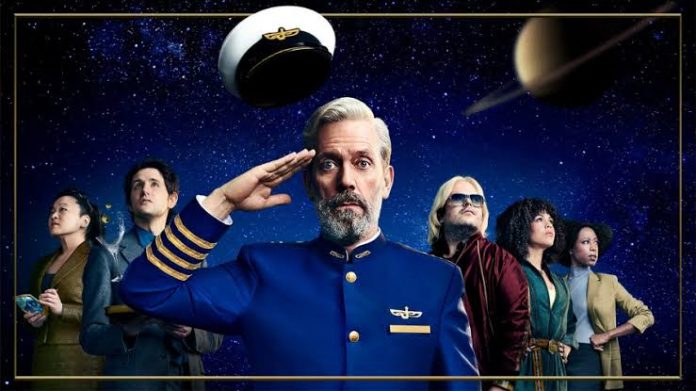 Avenue 5, new comedy from HBO, is the Scotsman's new bet Armando Iannucci for the company. The comedian, who has worked with the broadcaster in the famous Veep, is known for his predilection for showing that, regardless of the situation, people tend to act like idiots.

Investing in this point of view, Iannucci, who has used countless scenarios to show the mediocre behavior of human beings, this time sets his plot on a space cruise, 40 years in the future. Traveling for about eight weeks, the cruise offers all the comforts of an attraction of this size, with typical activities such as yoga, gourmet services and even a recreation room for children.

Commanded by the captain Ryan (Hugh Laurie), Avenue 5 has a small team, which, like the captain, is quite unprepared. With the constant pitacos of the owner Herman (Josh Gad), it is easy for something to go wrong and so an accident ends up taking the ship out of its trajectory, increasing the estimated time to three years. It quickly becomes evident that the team will not be able to cope very well with this unforeseen event.

With some criticism and several satires to the work of science fiction, the production uses all the arguments by hand to joke also with the daily life, occasionally making fun of the actors, such as the moments when Hugh Laurie uses his original British accent, abandoning the American way he used to speak for years in the series in which he became best known - and taking the opportunity to poke the need to hide his accent.

The proposal for the new comedy works very well on this pilot, who presents his plot and characters satisfactorily in less than thirty minutes. There is no doubt about the path that the series will take, leaving the idea that it will be a good comedy, with accurate humor and punctual reviews.

Avenue 5 it arrives as a very promising debut, using arguments that have already worked very well in the station's production, supported by great performances and a beautiful construction of characters.

Under The Dome: First Impressions