Comparative film vs book: Murder on the Orient Express 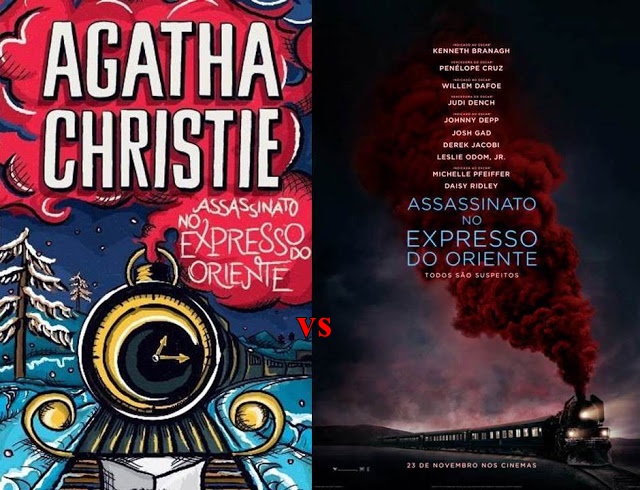 
Agatha Christie is a name that needs no introduction and its romance Murder on the Orient Express has already become very famous. Written in 1934, it is known for its unpredictable ending and has already yielded some cinematographic adaptations, now gaining its new version.

O new movie until it is very faithful to the original work, maintaining the main characteristics of the book and getting close to correctly presenting the detective Hercule Poirot. Still, there are some differences and you can check the main ones in the list below.

Of course, changes would be necessary for the introduction of Hercule Poirot (Kenneth Branagh), as he is a complex character with a promising future. For this, right at the beginning of the film there is a case that does not exist in the book, which serves to explain the skills of the detective.

Although very well represented, there are unnecessary changes in the character, which aim to make him more humanized. Starting with Poirot's close connection with the Armstrong case, since in the film he receives a letter asking him to investigate and situation and ends up being unable to help. This relationship does not exist in the book.

The character also receives a different past, a lost lover who constantly appears in scenes through a portrait, in which Poirot is fatigued and sorry. The protagonist seems to constantly reinforce that he is tired of his work, something that never happened in the author's novels.

This version, however faithful to the character created by the author from a distance, ends up being different from the drunk and short-tempered detective in the books, who uses his eccentricity to deceive suspects to underestimate him.

Most of the characters are faithfully represented in this film, however, some of them have been modified. Much of it is justified by the script that decided to address some issues of racial prejudice and to become satisfactory, it needed to make the changes.

The biggest one is certainly in relation to Dr. Arbuthnot (Leslie Odom Jr.), which assumes the identity of two characters in the book: the English colonel Arbuthnot and the Doctor who helps in the investigation, Dr. Constantine. The Swedish missionary Greta Ohlsson becomes Pillars (book character O Hercule Poirot's Christmas), Interpreted by Penelope Cruz. Already Antonio Foscarelli, originally an Italian car salesman, becomes Cuban Biniamino Marquez, interpreted by Manuel Garcia-Rulfo. Lastly, Bouc leads to a less significant change with respect to his character, originally introduced as an old friend of Poirot, in the film he becomes Bouc's young and promiscuous nephew, played by Tom Bateman.

In the book, when the Express is stuck due to snow, passengers are also stuck and the entire investigation is done inside it, making everything much more claustrophobic. In the film, in addition to the dramatization in the scene where the train is unable to walk, there is free access to the outside.

Poirot's cases are not subject to moments of struggle, however, as expected, the film inserts two action scenes involving the detective, and another clearly dramatized.
Certainly the most striking is when the Mrs. Hubbard (Michelle Pfeiffer) finds the murder weapon, which is not in his suitcase as in the book, but stuck in his back!

Other moments of dramatization are carried out by the detective and some suspects, who enter moments of physical confrontation. The first is when Arbuthnot points a gun at Poirot. The second occurs when the detective chases a suspect over a bridge.

Dramatization also in the solution of the case

The resolution of the case is undoubtedly the most interesting part of Murder on the Orient Express. In both the book and the film, Poirot presents two possible solutions to crime. At first, Poirot suggests that an assassin got on the train, stabbed Ratchett and disappeared. In the second, and correct, Poirot reveals that everyone on the train has some connection to the Armstrong family and conspired to murder Ratchett.

The difference is that in the book, Poirot sympathizes with the conspirators, but lets Bouc decide which theory to present to the police. In the film, it is not so simple. After presenting both theories and extracting a confession from Mrs. Hubbard, he declares that he cannot live with the injustice of keeping the killers' secrets. After a huge dramatization, where he puts a gun on the table and insists that the suspects will have to kill him to keep his silence, he eventually decides that he will present the first theory to the police and “learn to live with the imbalance” .

0
Documentary accompanies the result of the exacerbated armament in Rio de Janeiro Mexico and Colombia, and its consequences for the poorest, who are always on the margins of society.

Comparison Film vs Book: The Home of Peculiar Children

Big Little Lies: Is the series true to the book?