Comparison Film vs Book: The Home of Peculiar Children

Movies and books have different languages and that is why every film adaptation undergoes some changes to suit film fans. Deliver a fantasy with the premise of Miss. Orphanage Peregrine for Peculiar Children in the hands of Tim Burton is to wait for several modifications, after all, the director always leaves everything in accordance with his striking features.

In The Home of Peculiar Children, Tim Burton he used all the creative freedom he could find and changed a lot, but a lot, some improved the work, others were a little unexplained.

Several small changes were made throughout the film, but from half to the end it is practically another work. In the book, basically all the action is played in a chapter, which was too long so the script of the feature dramatically changed that fact, making it more acclimated according to the works of Tim Burton and giving a more comic tone to the action scenes .

In addition to this drastic change, some others have been made. We list the main modifications (it is not possible to talk about them all) in the text below:

The first modification happens right away, when Jacob becomes little Jake, called by his grandfather by a nickname that means "Tigrinho", in free translation.

Is it justifiable? Yes, in parts. It is bizarre to change the name of the main character, but it was clear that the goal was to make the protagonist even more out of place, especially with the use of the nickname, which the character himself says does not live up to him. In the book, the grandfather calls him Yakob. However, Jack or Jacob, your deeds are the same.

The mysterious disappearance of the friend

In the work of Ransom Riggs, Jacob has a single friend, Rick. In Tim Burton's adaptation, not even that friend the poor guy has! Rick was replaced by Shelly, his manager in the market, who gives him a lift when at the scene of the murdered man and sees everything, then he is never mentioned again.

Is it justifiable? Yes, it would be very complicated to explain the relationship between Rick and Jacob, and anyway, he stops being mentioned in the middle of the book, so it doesn't make any difference to remove the character.

The strange obsession with eyes

Anyone who knows Tim Burton's works has noticed that he has some kind of obsession with eyes, there is always something about eyes in them. It was no different here.
In the book, Ethereal they feed on the peculiar and for that they practically slice the person. Burton modified that and in the film they feed on the eyes.

Is it justifiable? Quite. As the feature is also focused on children, it became much lighter for the little ones. Furthermore, it is yet another one of Burton's many characteristics for fans to recognize.

Do you know the Psychologist Doctor Dolan? In the film is Doctor Dolan!
Is it justifiable? Well, it didn't make any difference to the plot. Plus, there's the bonus of the actress chosen to be the darling Allison Janney (Bonnie, from the show Mom), so it pays off just to see the actress.

3 years in the future

Is it justifiable? It must be, but I have not found the reason for this change. I believe that the idea of changing the year is due to some homage, or a remarkable fact from 1943 that they decided to take advantage of and use to make more sense, however, I came to research, but I found no explanation.

The exchange of peculiarities

This was undoubtedly the most meaningless change in the film. The peculiarities of Emma and Olive they were exchanged, leaving Emma with the power to float and Olive with the power of fire, the opposite being true in the book.

Is it justifiable? No. This exchange made no sense to me. I understand that the objective was perhaps to give a more romantic air to the work (floating creates more romantic scenes than setting fire), but it is not enough to justify the change of two characters. 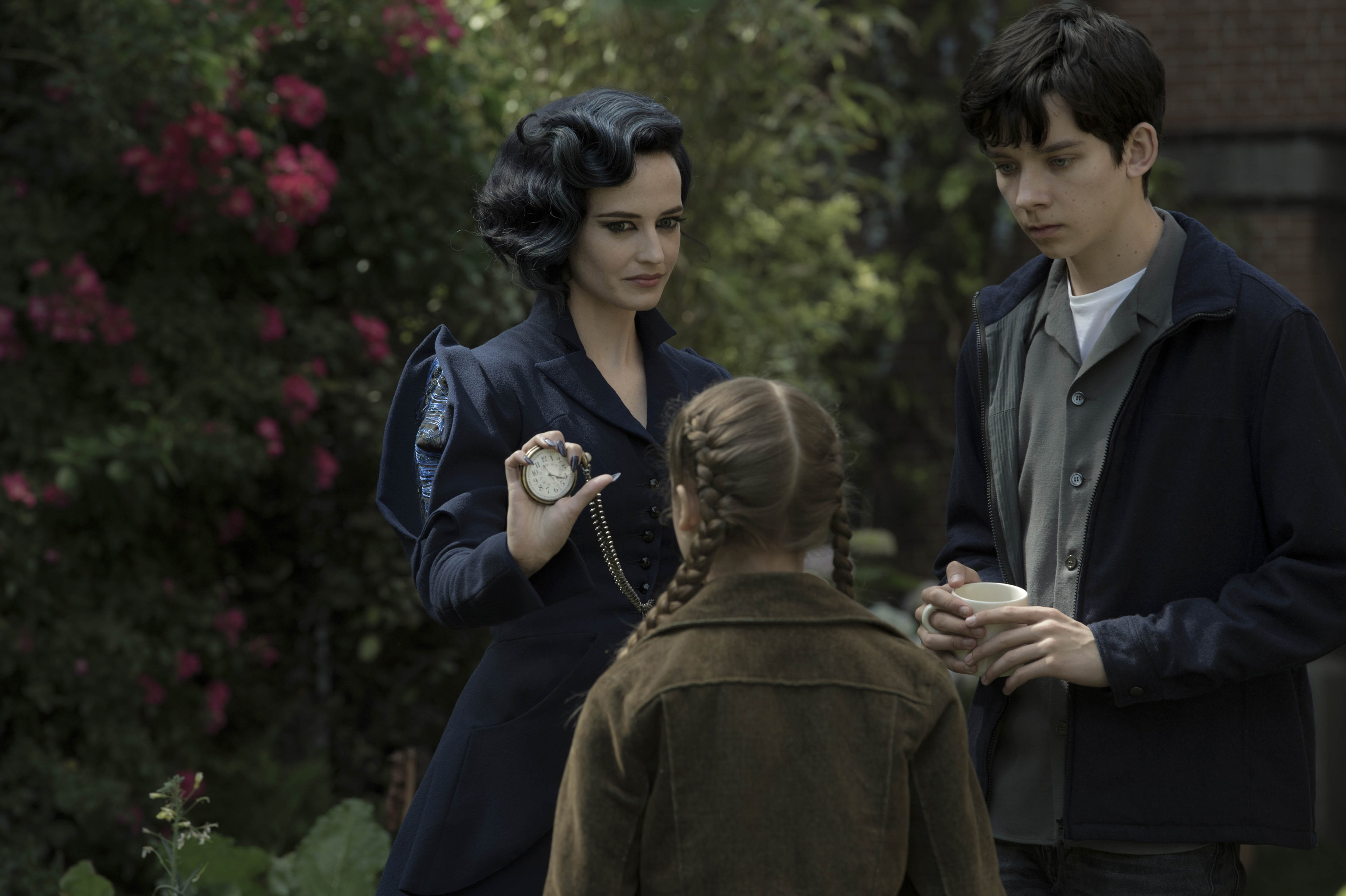 Alma LeFay Peregrine it is a Ymbrynes, a being that has the power to create and maintain cracks in time. In order to represent his power to control time, the film's script decided to leave Peregrine a woman obsessed with time. At all times she looks at her watch and controls the milliseconds for tasks.

Is it justifiable? Yes. It is an interesting feature for the character and does not affect the original story at all.

Divergences in the Temporal Rift

It is innocent to think that Tim Burton could have a story in hand that includes a time travel and not take the opportunity to use all the resources that this theme involves. Therefore, he transformed this small detail of the book into a great differential in the film.
With that, several changes were made to represent this gap and travel, such as the famous Hollywood feature of restarting the day using a watch. Peregrine does this at the end of every day, manually, that is, the crack is not automatically restarted with a person passing through it every day as in the book. In addition, Abraham calls her that day, unlike the original plot where he had stopped keeping in touch.
The most serious change was at the end, where the script shamelessly changed the events, taking advantage of this turn in time. I'm not going to mention exactly what it was to avoid this huge spoiler, but it was a drastic difference.

Is it justifiable? Some parts do, like how to restart the day, which fits the cinema better. The part of modifying the end was just a great abuse of creative freedom. 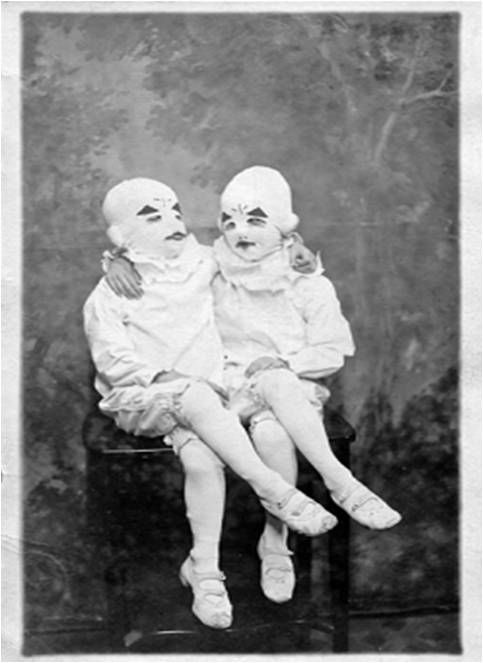 In the book, several quirks are mentioned and do not participate in the main plot, this includes the famous twins, who were a resource widely used in marketing the film. Burton decided to put all the children in the orphanage into action, even though he eliminated several for that, and that included the twins. To improve, he even gave them a peculiarity!

Is it justifiable? Certainly. I thought it was a little strange that the book had so many children, but only a few were willing to save their protector. Having them all together at all times fit well. As for the question of explaining the power of the twins, I found the chosen peculiarity sensational, it made a lot of sense.

Ransom Riggs constantly leaves the Ymbrynes weakened. It starts with Miss Avocet, who is very shaken by the attack on her orphanage and becomes almost a vegetable, until she is kidnapped along with Miss Peregrine. In the long action chapter, Avocet disappears and Miss Peregrine is seriously debilitated, unable to become human again.
In the film, in none of these moments are they harmed. Peregrine even volunteers to go with Barron and Avocet is helping the children. In the end, Peregrine has no problem, but Avocet has the same fate as the book.

Is it justifiable? Well, I think if you have Eva Green and Judi Dench in the cast, you're not going to keep them both in the shape of a bird all the time, right?

Discover (almost) everything that Metropolis inspired in pop culture

Brazil receives the unprecedented exhibition “The Art of Tim Burton”

Comparison Book vs Movie: Before I Go

The Witcher | Check out the differences between the series and ...