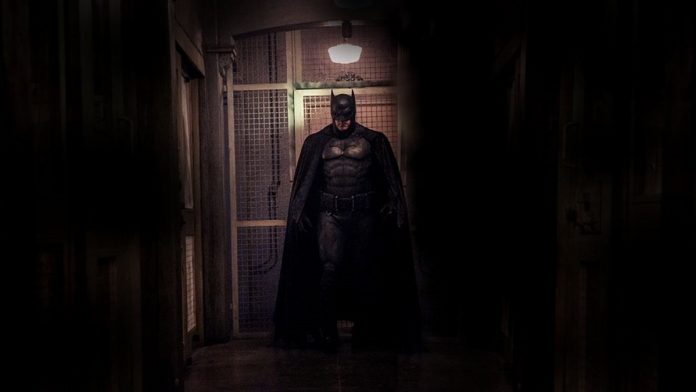 Hello dear, let's all hold hands and shout together for the next news that I bring to you. Are you ready?

"Elo ... I don't know how to say this but ... we already knew ..." Really ?! I'm not talking about The Batman, which will arrive in 2021, directed by Matt Reeves and released by Warner Bros, the Robert Pattinson and tals ... no, don't get me wrong, i'm excited for this one too, but actually i'm referring to a production that involves our favorite lonely-emo-gothic billionaire of all time, which is scheduled for this year and which is a totally independent release.

Let's go back to the initial question, from 0 to 10, think calmly, what is your level of nerd? Because these guys from Bat in the Sun must be there in the 100's. This group is characterized as an independent audiovisual group that makes our dreams come true. And what would these dreams be? LIVE ACTIONS FROM CROSSOVERS!

The group was created by two guys, Aaron and Sean Schoenke. They have a well-known channel in the Youtube and from time to time, they release some short films with the following themes: (I'm not kidding, I'll leave the link for you to check) Batman vs Killmonger, Batman Beyond vs Spider-Man, Black Widow vs Black Canary  and it just goes on…

Those mentioned above are all produced by this group independently and not for profit. For this reason, they scrape past the lawyers of all Hollywood boss b * tch * s who drool just by hearing the words "money" and "copyright"

Crossovers, who never? Every nerd who is a nerd must have read at least one, if he hasn't already produced his own and certainly watched a respectful crossover. This magic word that makes the eyes of all geeks shine, is characterized as a story with characters from specific universes meeting or preferably, dealing with some other character from another completely independent and different universe. For example a fight between Batman (no explanation needed) ((A.D)) it's the Killmonger, who for those who are bad at names, is the villain of black Panther. (Marvel)

To be considered a crossover, it doesn't necessarily have to be from different studios. The two mentioned above, produce their own encounters between characters who do not usually give roles together. The clearest example that comes to mind is the Super Shock it's the Super man. The two are from different universes, but are there, in one or two episodes together. Marvel was the meeting between Avengers and Guardians of the Galaxy. In short, this movement is not exclusive to us, fans, crazy about different things and unexpected encounters, no. And it's good that this is not exclusive to the studios too, because if not, this Batman that I was talking about up there wouldn't happen, right ?! Which brings me back to our main subject.

The boys in Bat in the Sun are producing a different film than they are used to. This time, the film will not be a “vs” fight like the traditional one of the guys, but, a plot of beginning and end, of Batman in a specific story with “our favorite bad guy” (yes, bad joke) Joker .

As they managed to raise a good amount of money, (not good Hollywood level, but very good for a fan film) things seem to go beyond the minds of the people who are used to following what the guys do.

It’s nice to point out here that this money was all donation, so I don’t know who is more spectacular in this whole tour, a group that makes a completely independent cinema, donates to those who hurt, realizing the impossible because they are completely separate and opposing styles characters that usually cost and generate horrors for an old industry, extremely articulate and protectionist, or the people who watch these productions and who still react to collections like this: “Gee, donation to make an independent Batman film? Sure, why not?!"

The film will apparently also be a short, as will the other productions and will feature Kevin Porter as Batman and Aaron Schoenke as the Joker.

Prioritizing the best of Batman in relation to his dark and tough look, we fans have been warned to expect psychological terror with a mix of detective stories, is it a noir thing? I will confess that I was seeing some pictures and that was what sent me. Some other villains will appear and with each photo, everything becomes more mysterious and interesting to me. It reminded me a little bit of Batman Begins with a mixture of Joker, I don't know, I may be kicking high and far, but now just wait and see.

A thorough search on the internet made me see, that the boys from Bat in the Sun, who promised to release this Batman until the end of the terrible and scary 2020, are not the only fans who go far for what they really want. Other people have done or continue doing crossovers on the internet in an independent and unexpected way, some for animations and use of editing technologies, others in acting, camera and courage. Everyone deserving the eternal respect of the geek community, obviously.

Tell us which is your favorite.