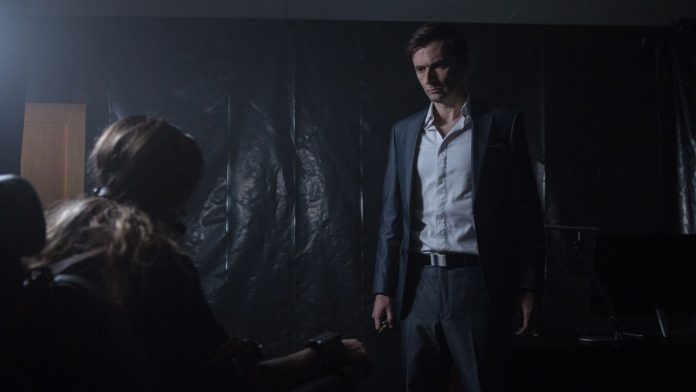 David Tennant is an actor who draws attention in all his performances. Very talented, he can impress in any role, whether in films, television or theater. The House of Fear (Bad Samaritan) drew attention right in the first trailer for bringing Tennant as the protagonist, serial killer very promising. And promising is exactly the best word to define it. At the end of the film, the feeling that the viewer has is that they could invest in continuations for the character.

An old-fashioned thriller, The House of Fear rescues the elements that managed to pass all the tension of the situation, without investing in any strong scene. At various times it is possible to jump out of a chair or despair at the moment, amid simple and certain situations.

Opposite David Tennant we have Robert Sheehan, who gives life to Sean, a young aspiring photographer who makes small thefts to make a living. When one of them ends up taking him to the home of Cale Erendreich (Tennant) and he discovers a woman held hostage. From that point he becomes obsessed with saving her, while suffering constant attacks from Cale. Sheehan gives another acting show, without her desperation and innocence to contrast with Erendreich's evilness, there would be no way to create the necessary tension that lulls the film.

There are reasons behind Cale's attitudes, which are explained above, satisfactorily, but leaving a space to be further explored in the future. The roadmap for Brandon Boyce it is so well closed and detailed that it leaves the impression that it intends to address more about such a well-grounded character.

It's almost impossible to finish watching The House of Fear without remembering Hannibal Lecter, not because of any resemblance to cannibalism, but because of the character's blind motivation to believe faithfully in his distorted motives. It is precisely this faith in its objectives that makes production so immersive, conveying to the viewer the despair at the simplicity of the situation.

The House of Fear it is a great suspense, especially for the current times that seem to think that extremism makes a good film. With this work, we can prove that less is more and that it is possible to win over the public by investing in something more everyday, but very scary.

The Lord of the Rings | Amazon Original Series is dated...

August 2, 2021 0
The long-awaited production will debut exclusively on Prime Video in over 240 territories and countries

Monsters at Work | 5 reasons to watch the series of...

Under Pressure | HIV in old age, parental custody and multiparenthood...

Review: Pride and Prejudice and Zombies