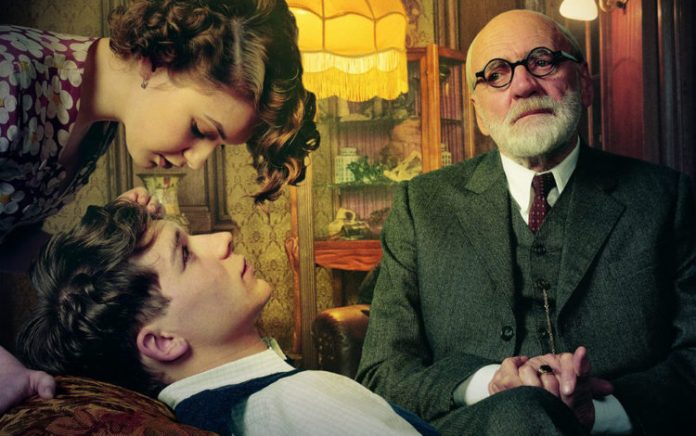 Based on the eponymous book by Robert Seethaler, Der Trafikant is an interesting film in its narration. With some flaws in certain parts of its script, it is still a feature to be watched and applauded.

The feature puts us in the view of Franz (Simon Morzé), an innocent young man who lives with his mother in a small village in front of a beautiful lake. By chance, he is forced to live in another city, Vienna. It is from now on that the film begins. Franz's journey is as simple as all young people who are looking for a dream to come true, but still have no idea what it is. He arrives with his innocence in the city, just after a train ride, disembarking in a dirty and noisy city.

From here we have already realized that Franz will be an analogy for everyone who seeks the realization of a future. And that is one of the two negative points that the drama presents.

The first is the arrival at the Tabacaria, place that gives name to the production. Ali Franz is head, future friend and mentor, Otto Trsnjek (Johannes Krisch). Otto is the owner of the Tobacconist and teaches everything Franz needs to deal with customers. The place is the point for many styles of customers, from those looking for school stationery, to the most intellectual, political, including Sigmund Freud (Bruno Ganz). The negative point is that the Tobacco Shop should be the most important character in the film, as it is the meeting point for these people and the narrative of the social and political problems of the time. In the end, it becomes just the title of the work, leaving this narration to Franz.

This leads to the second negative point, the poor exploitation of Freud's character. As the father of psychoanalysis, he should have a more contextual deepening with the events of the time and especially with the young man. Franz, still naive, does not know how to deal with the attention given by a woman or how to differentiate love from physical attraction. Even with the synopsis proposing that Freud says he does not understand the love of women, the psychoanalyst ends up serving as an advisor, without serving as an analytical support for human relationships and understanding the character's dreams. Its appearance in the feature is without foundation, leaving the impression of being there only to maintain the original proposal of the book, but without adding much to the plot. Except for Franz's dreams - which are not really analyzed - nothing else supports the character's appearance.

Removing these two points, Der Trafikant it's a great movie that shouldn't be judged for that. It takes place in a coherent way through Franz, where we get to know all the pre-war social problems. Especially how Austria so easily accepted Nazi entry into the country and how they were not so prepared for what was to come.

Just like today, when the population prefers to address all social and economic problems to an immigrant and other religions, Der Trafikant it serves as a parallel to a turbulent beginning of the century that killed millions of people and what we are experiencing today. It is no coincidence that films like this deserve greater prestige than expected.

But the film is not just about politics and war. He's also about relationships. There are three stories that join Franz. That of Otto as his mentor, Freud as a friend and even adviser and Anezka with whom he is hopelessly in love / attracted.

The vision delivered by this young man who still does not know these relationships, especially how to deal with women, is real and serves as a lesson for him to know how to talk to young people and not just think that they know everything, transforming them into bitter future men who will release them all. his frustrations in women.

There is also the contrast between his mother and Anezka herself. Two women of different generations, but having to deal with the same problems, which are financial, social and scolding for being women at that time. Through them we see how petty men are and don't mind practically trying to rape because they want sex at that moment, just because they are men and powerful.

Der Trafikant it could even be a cliché film with its story, but that's how life is. With stories of several people going through the same problems. So it is a timeless work, because life, no matter what time, presents the same problems of relationships that are universal.

Review | In Search of the Magic Portal

Criticism | In Search of Your Dreams

June 2, 2021 0
The pandemic's difficult moment exposes inequalities and the number of people in a state of vulnerability increases. You have to be supportive and empathetic.

Criticism | Shazam! worth every minute

Review | The Curse of the Mirror