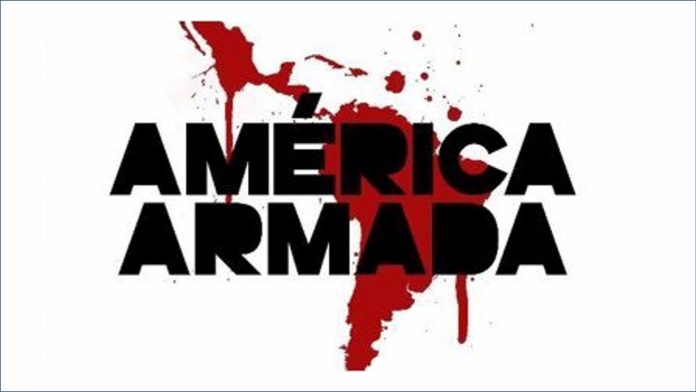 The militarization of civil society and the damage caused by violence

In 2005, the trade in fire artifacts and ammunition for the general population was the target of great popular mobilization. The society went to the polls and approximately 59 million people demonstrated to favor of commerce without restrictions. At least 70% of homicides in the country are by gunfire. Data taken from Brazilian mail.

The plot America Armed directed by Alice Lanari and Pedro Asbeg, they rekindle a very important and current theme: the heavy weaponry of various police forces and the creation of militias to oppress the marginalized population. We are introduced to three groups that follow the incessant work of three activists, one in Brazil , one in Colombia and the other in Mexico.

the big business in latin america is the reproduction of violence. – Speaking by journalist Heriberto Paredes

We are introduced to the young Raul Santiago, who was born and raised in Complexo do Alemão. Santiago is a member of Coletivo Papo Reto, with a cell phone and determined, through lives he broadcasts police actions and abuses in his community. the Colombian Teresita Gaviria lost her son murdered eighteen years ago, and has since become a militant of the group Mothers of La Candelaria, which promotes the encounter between other women who are in the same situation as her, with the imprisoned murderers of their sons and daughters. the mexican Heriberto Paredes is a journalist who, despite being threatened with death, follows the struggle of self-defence groups composed of indigenous people who decided to take up arms to defend their territories and their lives against drug trafficking.

The issue of making the carrying of weapons more flexible is a sensitive issue that needs to be constantly debated. The number of firearms registered in the possession of collectors, shooters and hunters in Brazil more than doubled in 2020. Data released by a publication by G1, show comparison with the previous year, there was an increase of 120%. It is the registration model used by sport shooters, such as the parents of the young woman who claims to have accidentally shot the teenager Isabele Ramos, who was shot in the face in a luxury condominium in Cuiabá on July 12th by her 'friend'. Despite this alarming number, four decrees by President Jair Bolsonaro, created to facilitate access to firearms, entered into force this Tuesday (13th). Rosa Weber, STF minister, suspended thirteen items on Monday (12), which renders ineffective a large part of the changes decreed by Bolsonaro.

In Rio de Janeiro, we see the reality of the citizen who lives in the favelas. This citizen is placed on the margin of society and this happens literally, as the State closes its eyes to the needs and rights that were denied to this portion, and this same State that does not support it is the same that shows itself to be an authoritarian institution and cruel transforming these people's lives into tragic realities. And on the other side, we have organized crime that is the result of an excluded population and survivors of social ills. In this middle of the field, residents have to deal with the terror practiced by organized crime and the police, who prove to be enemies by invading homes and using them as a strategic point of attack. The system here proves to be bankrupt and flawed, as it cannot protect its residents, it develops a police force that soils its uniform with innocent blood and does not even end organized crime. The system is carried away in its existence.

THE WAR, IT STAYS INSIDE THE FAVELAS BECAUSE DRUGS ARE EVERYWHERE. SO IT IS NOT THE WAR ON DRUGS, IT IS THE WAR ON THE POOR – ACTIVIST RAULL SPEECH

In Colombia, we are presented with the daily routine of a social worker who lost her son to crime, and this made her watch several women in similar situations – these are the most emotional and painful sequences in the documentary. The fact of showing mothers who have lost their children makes the social worker, in the course of the events, show herself as a strong woman in the face of the atrocities experienced by other women as well, and these are situations that add layers to the struggle of Colombians to regain the rights to peace , security and prosperity, as any democratic society should value and guarantee its population. Here, we see that democracy is absent and it is the protagonist of this vicious cycle that destroys many families in Colombia.

sometimes I ask you: is my son alive? Please give me a sign. – Report of a mother who lost her child

Mexico is portrayed through the lens of a journalist. These are interviews marked by terror, since the militia's domination is strongly loved and we see that it is present in every social layer and the dimension we have is a very intense social bankruptcy. The journalist who guides us through this brutal reality reports in his speeches the death threats he suffered and that even in the face of this possibility, he does not surrender to fear. Like the indigenous people who decided to take up arms to defend their territories and their lives against drug trafficking, he fights with his camera in his hand.

even though it is illegal for a civilian to take justice into his own hands, we have decided to do it – a report by a man who defends his territory

We realized that the handheld camera is something that follows the real characters of this terrible reality and is of tremendous urgency, because every second is a surprise, it is not known if an attack will start, anything can happen in a scenario of declared war against the population that has its hands tied. The positive point of the plot, in addition to the plots covered, are its characters, the activists. Each one with their combat stance, courage and compassion show that there are still HUMAN people in the world and that in an “Armed America”, it is the resistance to violence that makes all the difference.

Recurringly, the work questions the violence that is often trivialized by those who do not suffer, and this because violence already has a profile, address, color, everything is right. Violence knows who it is being directed at, it is being directed at the poor, black, from the periphery. The film helps us understand that the self-defense movement in Mexico, the violence promoted by the expansion of militias on Brazilian soil and the incessant search of mothers for their sons and daughters in Colombia and other relatives are “mirror” realities between the three countries .

Starting on April 25, the film AMÉRICA ARMADA will be shown on Globo News – it is already on screen at Now, Vivo Play and Oi Play.

Review | Once upon a time in Hollywood – Quentin Tarantino