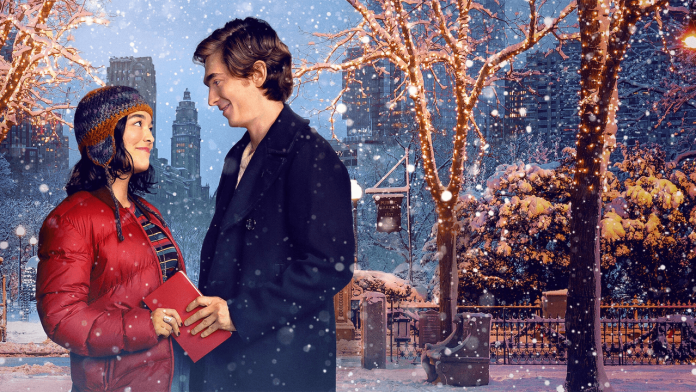 One of the most festive times of the year is coming and you don't have to wait until Christmas to open your presents. Netflix presented us with a short and very cute series, the exciting one, Dash & Lily. The production recently launched by streaming is the ideal option for you to make a marathon fast and fun, besides warming the passionate hearts and in this article you will have all the reasons for you to watch this series. Do you accept the challenge? If so, read on. If not, exit this page.

Since you chose the challenge, the series is an adaptation of the book Dash & Lily's Challenge Book, from the authors Rachel Cohn and David Levithan, in the story, a Christmas romance begins when hostile Dash and adorable Lily exchange challenges in a red Moleskine notebook that they send each other across different parts of New York, and discover they have more in common than they imagined. However, physically they don't know each other. Will it work?

⁠It is the most hateful time of the year. The fake joy, the bovine crowds. The corals that drink so much that they even forget the letters. And, of course, the naive couples who mistake Christmas spirit for love. I made that mistake too. Never. - dASH

Dash & Lily is a short series of 08 episodes lasting approximately 30 minutes. You can watch it on a Saturday afternoon. The plot is hot, and nothing stopped or boring. We can follow the development of two totally different characters and the coolest thing we can see is that the expectations of each one give us different points of view and angles of the same event. With each episode, we follow the challenges of both characters. And at the same time we know a little about the personality, qualities and defects of each one.

Initially, we started with Dash's point of view, he is a lone wolf and he believes that Christmas is a hateful time. In his favorite bookstore, Strand, he finds the famous red notebook and agrees to participate in the challenges imposed by someone, supposedly a girl. To repay, he challenges the owner of the notebook too. And in this dynamic, both get to know each other, exchange confidences, secrets, happy and hurt moments. It's like letters, everyone has the right to ask questions to get to know each other better, and always at a distance. And all this play makes the viewer dive into the lives of each character, we are thrilled with the barriers conquered and we cheer for the couple who physically do not know each other.

A positive point is the scenario. New York is beautiful and its wintry air makes Christmas even more beautiful and exciting. The soundtrack is very tasty and really warms the heart of those who watch it. Another positive aspect of the production is the inclusion of racial ethnic diversity and LGBTQIA +. We have a gay couple, we have drags, we have a black character who is very smart and funny and other very captivating characters.

The protagonist Lily is played by Midori Francis descendant of Japanese. She is a sweet, passionate and extremely upright girl. It has a somewhat troubled family nucleus. We have the perception that her relatives like her because she is the “good girl” and from the moment she starts to get out of her own bubble, she starts to be scolded by her grandfather, by her parents… her mother is such an apathetic being that makes us question: what mother is this? Who does not take into account the opinion of his only daughter? Even her father is more emotional than her mother. To make matters worse, she is seen as a strange girl. He suffered bullying at school and after that he closed himself off from the world.

I have no love story. And there is no problem. I don't need to have one. I have Christmas. - LILY

Dash played by Austin Abrams. Our hostile and mysterious boy. Particularly, a good character. He, like our cute and "sadistic" girl as he mentions, has a difficult family core. Her parents are divorced, and her encounters with her father often end up in dispute. Your mother is not that present either. He was dating Sophia, a beautiful young woman who had to leave the USA due to her father's work, so they broke up and we have the impression that he didn't handle it so well.

Lily is a girl who loves Christmas and Dash is a boy who hates this time of year. as they change challenges, they both know each other and help each other to overcome their fears. Lily and Dash's chemistry enchants and works very well all the time at a distance, and the viewer is always hoping that the two will meet as quickly as possible. But when that happens, the bug catches us and we wonder about the end of them;

The other characters contribute very well in the course of the story, unfortunately, do not gain depth, since the total focus is on the protagonists. Even so, the supporting actors help to give an "up" in the story, as is the case of Boomer, Dante Brown, Dash's best friend. He's fun, funny and gives Dash a big help. In addition to him, we also have Sophia, Keana Marie, ex-girlfriend of Dash, who gives that good shake in the routine of the boy and makes him reflect on some things.

Finally, we have a cliché couple that manages to survive the obstacles and the end of the plot is very round. It's cute, romantic and with a possible second season. Another very cool thing is the special participation of Jonas Brothers at a show in the city, highlighting Nick Jonas who, in addition to producing the series, also makes a special appearance in the story and also gives advice. This participation reminds us of the 90s series like The OC, which always had a nice show by a band cool.

Dash & Lily's Book of Dares (2010) which in Brazil received the title of Dash & Lily's Challenge Notebook was written by David Levithan and Rachel Cohn, brings a story that takes place all over Christmas Eve and Christmas / New Year set in New York.
read more
Reviews

Criticism | The Chemistry Between Us

The Chemistry Among Us is a production that shows with a clean face the reality of a love built on the basis of "repair" ... it is to understand the other even when we cannot understand each other, it is to support and walk together and in this feature film, overcoming situations that take us off the ground, may take longer than it seems, but that's it. It is rebuilding from the ashes.
read more
Reviews

Criticism | Scary Stories to Tell in the Dark

Scary Stories to Tell in the Dark promises to entertain all ages and be on movie lists to watch during Halloween.
read more

January 27, 2021 0
The new Disney animation will hit theaters and Disney + with Premier Access from March 5 across Latin America.