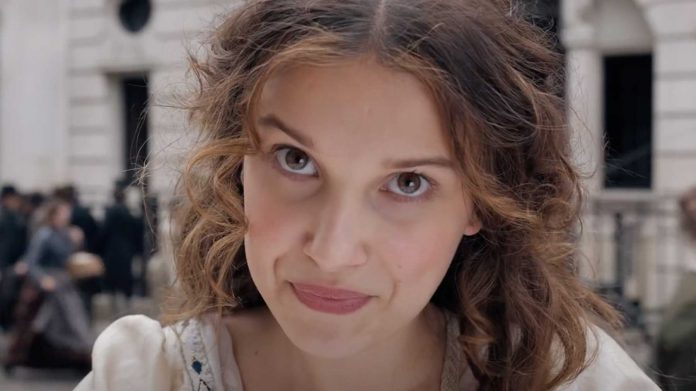 Based on the first book in the series of six works by The Mysteries of Enola Holmes, by American author Nancy Springer, inspired, of course, by the immortal creation of Arthur Conan Doyle. The production entitled Enola Holmes, directed by Harry Bradbeer, most recently responsible for several episodes of the series Fleabag, is, perhaps, the audiovisual sandcastle for Millie Bobby Brown to squander her teenage charm and her very successful dramatic capacity in Stranger Things and now in his feature. Millie's dedication and effort to her characters is remarkable, and this work promises to be a successful franchise.

The script by Jack Thorne (Extraordinary, The secret Garden) builds a story of self-discovery and maturation that starts with the disappearance of Eudoria Holmes (Helena Bonham Carter), mother of Enola (and Mycroft and Sherlock), who for some circumstances leads the young woman to flee from her brothers to investigate her whereabouts. In the process, she saves the life of young Lord Tewkesbury (Louis Partridge) who, coincidentally, is also running away from his family and he becomes Enola's first investigative case, along with his mother's, in two thematic narrative lines , but parallel.

Enola's character is well built and has depth, but her brothers… The presence of Henry Cavill as Sherlock and Sam Caflin as Mycroft are necessary to establish the family bond, but, soon after, they become impediments to the continuity of history and, unfortunately, the script insists on the presence of the brothers - one investigating in that usual cold style and the another constantly irritated by his sister's unexpected actions - throughout history, which only contributes to the (somewhat exaggerated) length of the long and sometimes even wasting the time that could be devoted more to Enola, especially his past and his very close relationship with his mother.

⁠I'm a detective, I'm a decipherer, someone who finds lost souls. My life is just mine. And the future depends on us.

A negative point: excessive didacticism. As it is a film that mostly has a young audience, the feature depends purposefully and almost abusively on explanatory texts on female emancipation, on gender equality and on the importance of being independent, looking for and treading the own destiny. Anyone who is minimally well-informed (newspapers, information portals, history classes, philosophy, etc.), will know how to understand the message and in that, the script lacks decorum that does not know how to pass its noble and necessary messages in a clear and natural way throughout the narrative. . We are faced with yet another production that underestimates youth that the message of history “says” is independent.

Bradbeer, for his part, makes use of all the artifices that a filmmaker can and wants to use to please universally and carries the long of elements like breaking the fourth wall (refers to a character directing his attention to the audience), flashbacks illuminators and mounts to reconstruct Enola's perception. No doubt they are nice narrative clichés and they work at first, but then it becomes a “crutch”. It is as if the director does not trust Brown's ability to enchant and interpret very well.

However, when the filmmaker decides to leave it in Brown's hands, keeping the camera on her for more than 10 seconds, she shows that she can very easily carry the film on her back, showing herself to be really independent and charming as her character. In addition, there is a good chemistry between her and Partridge that, even with limited presence on canvas, makes beautiful. And counting on the adult presence in the feature, it makes the film move. The presence that contextualizes, Bonham Carter, in a way, helps to give more understanding and mystery to the film.

⁠I couldn't stand this world to be your future. So I had to fight. You need to make a noise if you want to be heard.

The character of Helena Bonham Carter, who has few appearances, but very IMPORTANT. Eudoria Holmes ends up serving as a alter ego of Enola in several scenes of the work, both in the action scenes showing the viewer how the protagonist acquired her combat skills and in more sentimental scenes, that a quick appearance of the character is already sufficient. But it is only at the end that Bonham Carter appears and interacts directly with Enola, having a brief dialogue and justifying his disappearance for political and social purposes. It is the #girlpower of the investigative world of Holmes.

There is a concern and a great investment in art direction, with varied costumes and scenarios of the highest quality that help a lot in immersion, even if sometimes the establishing shots in computer graphics make the viewer wake up from the “fake reality”. But the London in the film is alive and beautiful and Enola, despite being essentially a “jack,” adapts quickly to urban life, learns quickly, something we have to accept as a convenience, but the script could have taken advantage of best of the time lost with the other Holmes, in particular, the lost Sherlock (Robert would have been a more assertive choice).

Enola Holmes it really shows the potential of Millie Bobby Brown who is able to have fun without compromise. Of course, we expected a lot more and there was a lack of boldness in the script that aimed higher, didn't want to take the viewer's hand all the time to explain each of its points and if the direction really let the protagonist walk alone for a longer time, it would have been super production. We hope that in the next chapter of the adventures of Sherlock and Mycroft's little sister, she will, in fact, be the guiding star of the feature.

Beauty and the Beast: See the backstage video of the feature

Disney is investing heavily in promoting Beauty and the Beast. Now the company has released a behind-the-scenes video with statements from ...
read more
News

Disney keeps releasing new material from Beauty and the Beast, and everyone shows how faithful the adaptation is to ...
read more
First impressions

Vicious tells the story of a gay couple, who have lived together for over 48 years. It narrates their daily life, between various discussions, ...
read more

Review: Walt Behind the Scenes by Mary Poppins