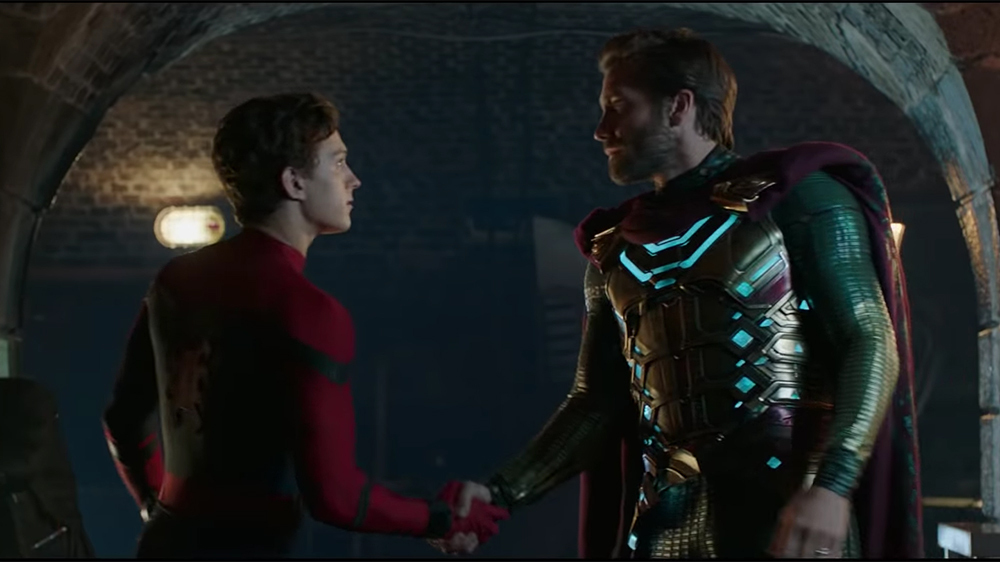 Spider-Man: Far from Home began its spreading with the promise of being a sequel to Avengers: End Game. After the death of Tony Stark, is the question of who will take the suit of this icon, mission given to Peter by Tony himself. Is around this premise that the events of the film take place.

However, unlike expected, this premise is just one of the elements that make up the film, it’s an excuse to explore Peter’s insecurities (Tom Holland) and analyze the weight of such an important decision left in the hands of a teenager, but isn’t the main focus of the plot.

On a European tour with his schoolmates, Peter hopes to have some rest to deal with the heavy events of recent years. However, when the main cities of the continent are the target of a terrible threat, he’s summoned by Nick Fury (Samuel L. Jackson) to neutralize it alongside the enigmatic Mysterio (Jake Gyllenhaal).

Living a bit of normalcy with his peers, and the responsibilities of being Spider-Man, the script manages to deliver deep issues, psychological analysis, and emotional scenes that are perfectly balanced with well-placed moments of comic relief.

The characters are more exploited, even those who were only introduced in the previous film and had little participation. The performances also surpass, mainly of Holland, that only comes increasing its talent to each length that participates, and Gyllenhaal, that delivers a very convincing paper in its complexity.

Spider-Man: Far from Home shows a huge maturation in the franchise of the character, which finally seems to have found its way. The fruit of a profitable and very successful partner, it seems to be Marvel’s most promising hero in theaters today, with enormous potential to grow even more. Factor this proved by the end of the long and extra scene exhibited, they manage to shiver the fans and create great anxiety for future works.