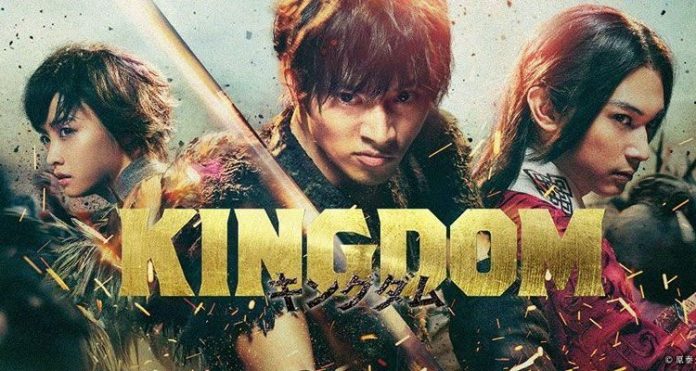 Kingdom is a film adaptation of the manga series of the same name, created by Yasuhisa Hara and published by Shueisha.

In the manga, millions of years have passed since the time of legend, when the worlds of men and gods were still the same. In these times it was man's desires that changed the world. It is the period of the 500-year war: the Age of Warring States. Kingdom it is the story of an orphaned and poor boy who dreams of becoming a great general and thus beginning his path of trials and bloodshed that will take him to the top of the legends!

The film follows the same idea, only much faster in 2h15 of adventure, where a war orphan, Xin, lived by Kento Yamazaki (Another, Jo Jo Bizarre Adventure, Death Note, among others), who dreams of leaving his low status in life as a slave to become one of the greatest generals. Xin soon after a tragedy meets the person destined to become Qin's emperor, Ying Zheng, lived by Ryo Yoshizawa (Kamen Rider Meteour and Fourze), who has just suffered the loss of his kingdom to his brother. Zheng proves to be a key ally in Xin's journey to achieve his dream. Together, the youth seek to regain Zheng's throne and unite the Warrior States under a single banner.

Like all Japanese features - I will not comment on the manga -, Kingdom it follows the rule of the hero who for years trains to become something more than the others.

He has a best friend, Piao, who in addition to serving as a point of balance, is the one who will make Xin realize that just dreaming is not realizing. And that to make his dreams come true, he will get hurt and have losses. During this journey, with each battle that follows, he may fall, but will always rise.

The motto of Japanese stories has always followed the spirit of the warrior, of those who will overcome themselves and fight for just causes. Kingdom this model with a beautiful story and captivating characters follows to the letter, even if the film does not have time to present them in a proper way and bring a little more of them into the adventure.

Basically, the film follows the line of the two central characters who wish to accomplish something and are prevented by others. The hero's journey that so many already know, but which in the stories of manga, anime and feature films from the country of the Rising Sun have been told for decades.

Those who fall from parachutes can even compare with game of Thrones, and they will be both wrong and right, since this type of adventure is narrated long before GOT even thinks about existing. Fights for the throne, brothers who betray their blood, the power that passes from one side to the other, etc., are recurrent and even cliché themes in Japanese narrative.

Kingdom, in addition to history and good characters, it has a great photo and soundtrack. It is a pity that he cannot be seen on the big screens in Brazil. Or who knows, still can.

This is undoubtedly a great film, which made its debut in Japan, which was in April this year and arrives this month in the USA. It's a nice bet from Sony and Toho to take more of this type of history to the American public, which in recent years has consumed, even if indirectly and adapted, Japanese products.

The manga has also had an anime adaptation that lasted 2 seasons, from 2013 to 2014 and now the film.

Review: RIPD- Agents of the Beyond