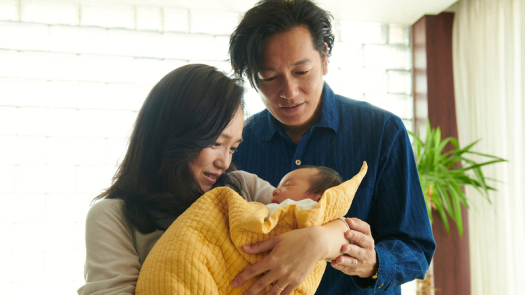 Real Mothers (Wing ga Kuru) is a drama directed by Naomi Kawase, selected for the 2020 Cannes Film Festival and based on the book by Mizuki Tsujima, launched in 2016.

The couple Satoko and Miyokazu (Hiromi Nagasaku and Arata Iura) has something in common with Hikari (Aju Makita), the child called Asato (Reo Sato), united by an adoption agency that brings together couples who cannot have children with women who do not want to not be able to be with their children, for the couple it is the perfect opportunity to be able to have a complete family, since Miyokazu has a condition called aspermia, which makes you infertile.

While we follow Satoko concerned about the future of her son who may have inherited something bad from his inbred parents, caused by a call from the high school Asato saying that he had pushed one of the friends. We also follow the trajectory of Hikari, as the teenager falls deeply in love and ends up pregnant, even before having her first menstruation, being too late for an abortion, her time with the adoption agency until she gives birth to her child and the difficult period she faces trying to adjust again your reality.

Hikari she never had the option of choosing what she really wanted to do with that pregnancy, the only possible way was to renounce her child according to the wishes of the parents, which keeps her from the family in an irreparable, hurt and angry way. She tries to return to the adoption company to work there, but arriving at the location she discovers that the company is about to close, as soon as the last adoption is completed, leaving her even more lost and in this state that finds the data of the family that adopted her son. Hikari goes through numerous problems that lead her to contact the family that adopted Asato, causing tension between Satoko and Miyokazu who do not believe they are talking to the real Hikari.

While some things seem absurd to those who are used to Western culture, in most Asian countries the notion of honor is still very strong and having a pregnant teenage daughter is a source of shame for many parents, who do everything they can to hide this fact from society, and may even evict them from their homes. Another remarkable fact is how there is a belief that children can inherit genes that make them become bad people, disassociating education and the environment in which that child is raised, as if being good or bad is something transmitted by blood.

Even in an extremely developed country, some themes are still considered taboo by society that try at all costs to pretend that they do not exist besides having totally unfounded ideas and that they only continue to reinforce prejudiced stereotypes. Even the fact that Asato being an adopted child is something that can be used, as it is something that can bring shame on the family.

Real Mothers makes us reflect on what is happening both with the mothers of adopted children and those who gave their children up for adoption, a delicate film dealing with this theme with sincerity and showing how the social reality of a country can be anachronistic. Your original title Wing ga Kuru means "The morning will come", demonstrating that regardless of the darkness and the problems, a new day will always come, a new morning will find us.

Real Mothers debut on the day May 13 in Brazilian cinemas.

Review | An Officer and a Spy

April 12, 2021 0
Escola Allegresse Morumbi - SP, has just acquired the rights to one of the greatest musicals of all time, Les Miserables.