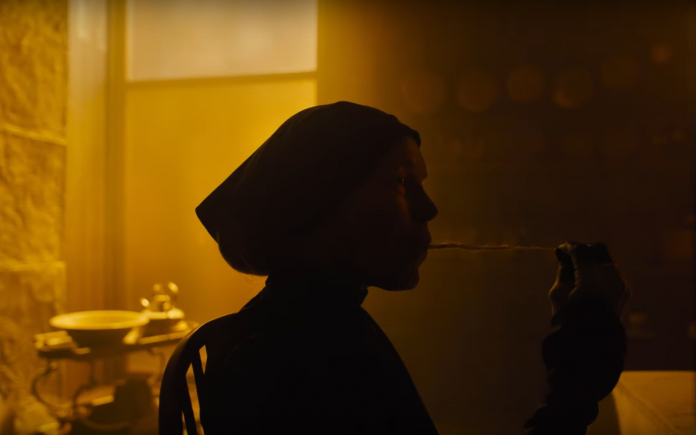 Gretel And Hansel has direction of Osgood Perkins (Oz Perkins) who was also responsible for The Last Chapter (2016). In this feature, we rescued the story of João and Maria in a more serious and dark way.

We follow the story of Maria (Sophia Lillis), which takes John (Sammy Leakey), his younger brother to the forest in search of food and work, after being expelled from home by his own mother. In the middle of their search for a place to spend the night, they meet a strange creature, and end up being saved by a man who shows them the way to a village that may be able to shelter the brothers. On their journey through the forest, they find a hut and a table full of food inside, which enchants them with the hunger they are experiencing. The hut resident is Holda (Alice Krige), a lady who seems harmless, but as the days go by her true nature is revealed.

The basis of the film is the same as that of the well-known João and Maria, with some occasional changes. The first to be noticed is the insertion of another story at the beginning of the film, of a very beautiful child with a pink hat and how she survives with the help of a witch, but there is a price to be paid for that and that everyone later regret, the story that seems innocent has one of the key points of the film.

The main focus is young Maria, which is perhaps why the names are reversed in the title, the growth and discovery of her own inner strength. With the exception of João, the film maintains a predominance and feminine importance, without being forced, but simply because they are the main characters and the younger brother just a motivation for conflicts to exist.

Seeing Maria developing during her stay at the hut with Holda, recognizing some of her talents as she faces the transition to a young woman is both an interesting and tiring journey, interesting in that she shows us a totally different character than we are used to. fairy tales but in a dragging way and taking a considerable amount of time in the feature, which does not seem to pass.

Gretel And Hansel it leaves several parts without any explanation, with some holes in the story that it is not yet possible to know if they are purposeful and with the intention of a future continuation, the shallow approach of the characters leaves something to be desired for not bringing so much engagement and verisimilitude to them.

In general it is a suspense film with light touches of terror, always questioning whether what Maria saw was real or just a hallucination in her head. With a simple setting, but beautiful and consistent with the film, the film can be a good one for those who want a different story, but without big surprises and emotions.

Although the story has a good argument and the changes made bring a new perspective to João and Maria, the pace is slow which impairs the feature a little, making it monotonous and without major events, especially after the arrival of the brothers in the hut , having a slightly better rhythm in the last 30 minutes of feature film, where the final conflict and the closing occurs, which leaves open ends for possible continuations.

Criticism | Alice and Peter: Where Dreams Are Born

Criticism | I Am Not Okay With This- Season 1

Review: Women of the 20th Century

Review | All the Bright Places