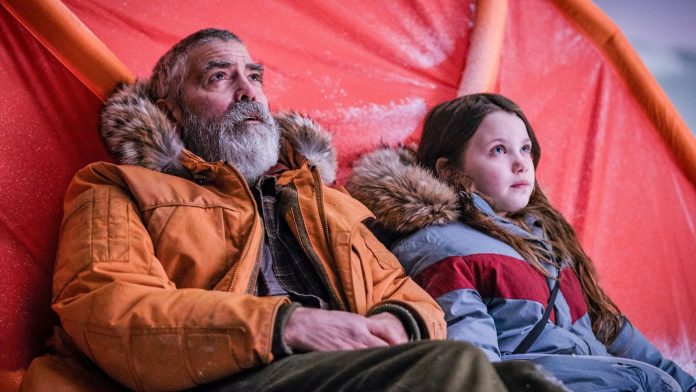 The end of 2020 is marked by the tone that the production starring and directed by George Clooney has with the current moment in which we live ...

We are currently experiencing an unexpected situation. Who would have thought that the year 2020 would be marked by the isolation and lack of communication we know: hugs, kisses, signs of affection and tenderness ... all that had to leave the scene and what was left was loneliness. Aspects that are part of the feature film directed and starring George Clooney, where humanity decides to leave Earth in 2049 in search of a new planet, after presenting high levels of radiation. A new moon on Jupiter creates hope for the future of humanity. However, the team of astronaut and commander Sully (Felicity Jones) cannot get in contact with anyone on planet Earth.

Initially, we are introduced to Augustine (Clooney), a terminally ill scientist who decides to stay on Earth while humanity leaves the planet due to radiation that spreads at high levels. At an Arctic station, Augustine remains on board with space exploration activities, hoping that some astronaut team will find a new home for humanity. During a quest for ongoing missions, the grumpy scientist comes across a child left behind and a team returning from Aether bringing good news from Jupiter's moon. However, what Commander Sully (Felicity Jones) and his team do not know is that the ship cannot communicate with Earth because the planet is uninhabited.

It is from there that the tension begins and divides into several dynamics. While Augustine tries to find ways to communicate with the astronauts, she needs to take care of a little girl with whom she has a peculiarly strange bond. In addition, astronauts in space face various adversities during their return to Earth. This is where the film slides. He did not innovate in the adversities faced by the team in outer space, causing the meteor shower, the expedition out of the spaceship, the broken radar and etc., to become "simple" events, which we are tired of seeing. It lacked to innovate, to leave the traditional and to take risks. There was no seasoning, no action.

Two positive points are: the presence of the little girl that we didn't understand at the outset and the lonely atmosphere of Augustine's arch, who spends her days revisiting important memories of her life. Perhaps, the action deposited in the space was not so assertive, but they are points that do not diminish the positive points of the feature.

The photograph is beautiful. With cool and vibrant tones that we see at the same time in the terrestrial space and in the space plane, the film presents us with an explosion of colors and well executed effects. The soundtrack is perfect and gives the melancholy and deep tone of the production. The performances are impeccable. Both Clooney and Jones and their team performed well. It must be difficult to be an actor and director in the same production, but the end result was positive.

Another good aspect to highlight in the plot is the choice of casting another actor to live the young Clooney instead of betting on the rejuvenation technology that is cool, but the vocal combination between George Clooney and Ethan Peck it is a surprising point, in addition to the ability to demonstrate the lack of gravity in the space scenes is striking. But what captivates and captivates the viewer is the real and true intensity seen in Clooney's performance that provides us with a taciturn, meditative, lonely but with personality character. Without the previously mentioned slips, Midnight Sky it is a silent film, which perfectly transpires the feeling of being alone, isolated.

The tension peaks we see in space, but the scene of crossing during a snowstorm is sublime. It is Augustine's arc having its highest point next to the small Iris as they cross the Arctic to reach a long distance satellite. The storm is real and the moment was well filmed and portrayed. However, the most beautiful scene is the simplest ... when we see our protagonist playing with his companion and a plate of peas.

It is in the end of his story that Sully and his team show a connection with the theme addressed by the film, the long-awaited goal happens. The main idea that permeates each attitude of the characters throughout the film, is what gives a sense of love, is what makes us want to overcome barriers and do everything to save that or those we love. Despite showing the end of the world as we know it, Good Morning, Midnight it is hopeful and not at all pessimistic, ending the year 2020 with what we need: to believe that it will work.

Home Video
For about three years, a streaming platform has been in development. It is not something so unprecedented, after all, every day, new ideas emerge all over ...
read more
News

Criticism | The King of the Show