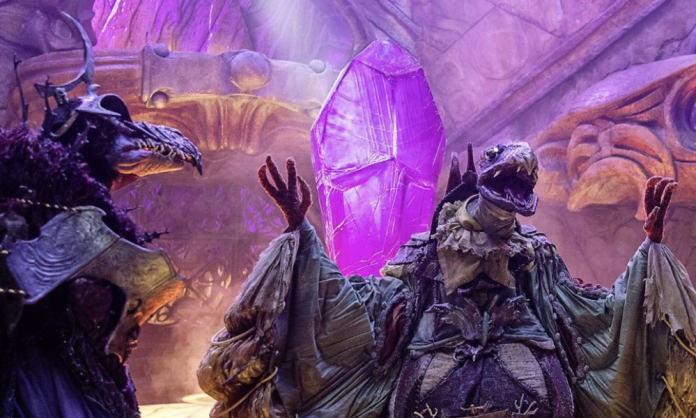 The “Muppets” are back. But not those you know with “Caco” and co, who now belong to Disney. These are the darkest and the fantasy created in 1982 by Jim Henson and Frank Oz.

At that time, storytelling with puppets, especially for children, involved fun and exciting adventures. Henson and Oz innovated by daring with a dark fantasy narrative, involving a complex atmosphere and totally different from everything done until then.

Thus was born The Enchanted Crystalin the original The Dark Crystal -that has more to do with the title than the national translation. Its history shows the world of Thra. It all starts a thousand years ago when the crystal is broken and a prophecy says that only if a Gelfling manipulates the crystal, peace will be restored. So Jen and Kira's journey begins.

It is a summary of the summary, removing all the reasons that lead the journey, so if you want to check, you will not suffer with spoilers. The reason? This new adventure that arrives on Netflix on August 30, is a prequel the events of the original 1982 story.

Keeping the same characteristics of the original puppets, since the current ones were created by the artists Brian and Wendy Froud, who also sculpted those from 1982, the adventure maintains the same dark mood told by these characters. Some, besides puppets, are animatronics, but there are still no humans on the scene. This is even interesting and catches the eye. The story for today is nothing new, but it is coherent and deeper than those told today.

In this story - which has the dubbing in the original composed by names like Mark “The Joker Skywalker” Hamill, Caitriona Balfe, Helena Bonham Carter, Taron Egerton, Nathalie Emmanuel among others-, it happens at the moment when the world of Thra is dying, and the Crystal of Truth is at the heart of Thra, a source of incalculable power, but one that has been corrupted by the Skeksis, and a disease spreads across the land. When three Gelfling discover the terrible truth behind Skeksis' power, they set out on an adventure to try to prevent the worst from happening and thus form a rebellion. To represent these evils, emotional scenes are shown from the first episode, which become somewhat impressive, since the rating is 12 years old.

Dark stories with an emotional and moral appeal seem to have been lost, hidden in the excuses that the new generations are not prepared for them. Justifying that dealing with loss and malice, as well as responsibilities, are parts that must stay for when they are adults. But there is no problem when it comes to trade and violence, where the discourse becomes that they must be prepared to face the world in this way. The Enchanted Crystal: The Age of Resistance may suffer because of this new vision, since the target audience fits the description above and are not as interested in this theme as in the past.

Inconsistencies aside, The Enchanted Crystal: The Age of Resistance has a smart script for all audiences. The use of puppets, unfortunately, may alienate children and adolescents, who prefer something more 3D, such as Toy Story, to watch. The series has the potential to attract parents who grew up watching programs like The Muppets, Garilbado, Top Gigio, and other landmark programs that were at their peak during their childhood.

Unfortunately, the use of puppets has been almost forgotten for decades, with companies giving preference to other types of animation, and new generations will feel the impact of seeing something new, with an old face.

Anyway, The Enchanted Crystal: The Age of Resistance, with its 10 episodes that arrive on September 30 at Netflix, is a great animation, which can be tiring for this audience, but that will entertain the elderly, who, if they are smart, will remember this nostalgia and call their children to learn about manual work and a way of telling stories that is more engaging than just “punching” buttons.

Nobody gets it right the first time, but that's what adolescence is. However, the film's title plot has become a poorly developed and almost forgotten subplot. There is a lack of consistency of facts, events and consequences in this film which, because it is a sequel ... should be better.
read more
Reviews

Although A Barraca do Beijo has a strong protagonist, it is a youthful novel and offers no novelty or surprise. The “more of the same” recipe is stuck.
read more
Comparatives

The Silence of the White City has become a hurried and unsurprising film, unlike the book is breathtaking. See the differences between the works.
read more

Criticism | I Am Not Okay With This- Season 1