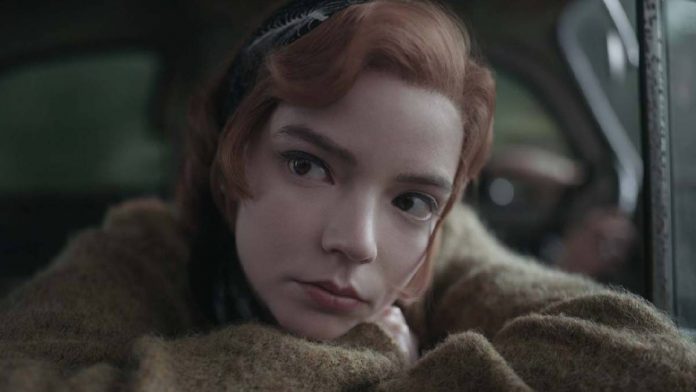 Based on the book of the same name written by Walter Trevis, O Gambito da Rainha, it tells the story of a young woman who survives a childhood full of difficulties and finds a way in chess revealing herself as a natural talent

Since the world is a world, the price of female genius is paid with contempt and repression. In The Queen's Gambit we see a well-produced series that addresses a journey with many difficulties and resuming its origins with ups and downs, internal demons and a splendor of glory that emanates from an extraordinary personality in an activity considered masculine. Netflix does not joke about service when it comes to original productions. The miniseries created by Scott Frank has a differential that goes beyond the exploration of the chess universe, passing in a scenario of extreme complexity for its protagonist to make chaos its stage. Full of suspense, mystery and even a little seduction, the series was not made to get to know only the world of chess players, but the constant structural machismo repressing female genius.

Since its strong and impactful title, the series is about surpassing yourself at all times and it is with Beth Harmon that we are aware of this. In an interview, Beth mentions that chess is “a universe of its own within 64 spaces”, that ironically or not, the queen is the best piece on the board, and the king, only serves to be protected by her. And in this dynamic, Harmon, to become the queen, needs to overcome not only his opponents in the game, but a number of personal obstacles directly and indirectly linked to his origins. It is curious how the series addresses being a prodigy in the midst of addiction to drinking and tranquilizers, grief, motherhood or lack of it, superficial relationships and sometimes with unclean goals and in general, genius and madness go together and it is this that scares our brilliant, but problematic, protagonist.

Initially, the plot begins on the morning of Beth’s second match with Russian world champion Vasily Borgov (Marcin Dorocinski), in Paris. She is hungover from the night before. And in this scene there is a cut that jumps decades ago to introduce us to this young woman with a magnetic and lonely look. The cut takes us to her mother's accident and then her trip to a girls' orphanage, Lar Methuen. There, she meets important people who will make your stay memorable or, perhaps, not so much. Beth befriends Jolene (Moses Ingram), a spirited young woman who is a few years older than Beth and faithfully believes that she will never be adopted; Helen Deardorff (Christiane Seidel), the woman who runs the orphanage; and Mr. Shaibel (Bill Camp), the caretaker of the place that gives Beth his first chess lessons and with that, we see our protagonist being shaped.

It is in the course of the episodes that this mold takes shape and we can see a purpose for the whole production. We see in Beth Harmon a set of consequences initially inherited by her, which we later realize are reactions of decisions made by other people around her that make this young woman who she is… a fragment of pain and repression that shaped by the social structure that he did not accept a woman anywhere but in a home caring for her children and her husband.

Beth's interpreter is the actress Anya Taylor-Joy, exudes confidence in her mesmerizing presence on the scene and it is she who makes the viewer tie herself to the canvas. The camera feels intoxicating pleasure in capturing her every gesture, expression, decision ... movement. The presence is so imposing that we realize that the title refers to it. Her psychological delivery and visual presentation can be considered one of the best performances of 2020, if not the best.

The confrontation is a spice that is present in all episodes and in a few characters, being as a base, part of the construction of Beth who with her innocent gaze and with the help of another marginalized, the caretaker, saw in chess a choice and a possibility of life and thus acquire an extraordinary dowry driven by his talent. Perhaps, if she hadn't had that curiosity as a child, her talent would never have been discovered and polished. Unfortunately, this is a recurring thing. Many women, due to lack of incentives or due to the arrests imposed by the social structure in which they live, are prevented from walking their own path. We can believe that Beth's "mothers" had unhappy endings due to this pressure. When a woman is born, she ceases to be a person and becomes a puppet of the patriarchy itself.

Perceive the secondary characters and their plots. Harmon's adoptive mother could be a wonderful pianist, however, trapped in an abusive marriage, she found alcohol and tranquilizers a path of no return. The Frenchwoman Harmon knows in New York is presented as an intelligent woman in the field of aesthetics, but reports that the fashion world sees her as a mere object that after a while becomes worthless. And the most important character and who at great cost becomes a source of inspiration, the friend of Harmon's orphanage, Jolene. Observe the armor she had to create to get to where she is regardless of gender and color. Yes, color is something that decides the course of many people since the world exists. On the other hand, the chess universe mostly composed of men speaks for itself the great difference in incentives for talent composition, even more when it is a trait explored by other characters who are willing to help Harmon with other problems, it becomes more evident the male privilege to the specialty and the facilities.

If you pay close attention, a relevant point is the perception that the plot creates an atmosphere of pride that is an intrinsic part that walks linearly with the development of the protagonist to be the best chess player, but it is also symbolically a woman's resistance to her place in a world that does not encourage it, at least not in the USA. In a part of Russia that is entertained with chess, things are a little different, it is a country that encourages women to play and has its own prize category.

Another important point is that in the context of the Cold War, this inclusion is a very attentive look by its creators and the fact that the pieces are black and white for the time it portrays is an even more relevant fact, as always who starts with white - is it a privilege of color? - has a certain advantage. However, players, regardless of nationality, play with both, that is, it matters little in the sports spirit showing that regardless of many social configurations, through sport we can promote inclusion.

⁠After sadness overwhelms us, prayer and faith lift us up. Enough to see a new path. - Jolene

Chess, therefore, is seen in its conception of play for narrative events. The plot uses aspects acquired from the cinema to create strategic plans that communicate and complement the story, leaving the entire production round and dimensioning the space to contemplate the atmosphere of its time that had been reconstructed based on a production design composition work, simply interesting and truly beautiful costumes and makeup. The montage is a special highlight for not making chess matches repetitive and tiring, alternating between long shots to amplify the tension of more important matches, elaborate editions that summarize trajectories that are not so relevant or cuts necessary to break certain expectations or instigate curiosity and anxiety about future events.

Finally, we have excellent direction in all aspects. Soundtrack, setting, costumes and an acting show not only of Anya Taylor-Joy, but of all chess players. The plot that addresses the life of a little girl who emerges unscathed from an accident (murder-suicide), shows that a lonely journey, accompanied only by addiction to alcohol and tranquilizers is something that slowly destroys the protagonist. Although this is not the intention, it is by letting go of this that Beth regains her self-confidence and finds a purpose. Make no mistake, her victory is not due to the help of her friends, but exclusively by Beth. It is about her journey throughout the series and it would be totally unfair for her to share that moment of glory with others.

Criticizes | Addressing the issue of immigration, Routes of Hate begins ...

First Impressions: About a Boy