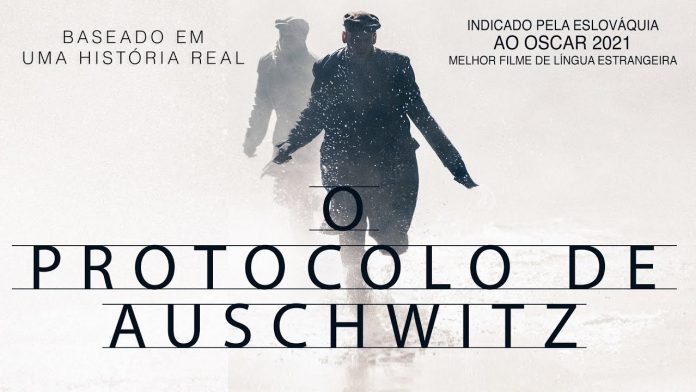 According to the online dictionary Dicio, the word HOLOCAUST is a masculine noun and means murder, genocide which, initiated by the Nazis during World War II, victimized Jews and other minorities, carried out in concentration camps built by the Germans. After 70 years since the end of the infamous Second World War, we are reminded of the barbarities committed and how painful this part of world history is.

Although there are many works that address this period of history, especially Nazi Germany under the command of Adolf Hitler, producing a new plot - based on real facts - is quite a challenge. Now Peter Bebjak accepted the challenge, The Auschwitz Protocol was Slovenia's bet as Best Foreign Film at the Oscar 2021. But does it stand out or is it more of the same?

The plot directed by Bebjak, is based on the book What Dante Did Not See (What Dante Didn't See, in literal translation), by Afréd Wtzler. We are presented the story of two Slovak Jewish prisoners, Rudolf Vrba, played by Peter Ondrejicka, and Wetzler, character of Noel Czuczor, who flee Auschwitz and risk their lives to recount the inhumane acts that took place in Nazi reality.

It is extremely important to point out that Nazi Germany only succeeded in murdering, torturing so many innocent people because much of what they did was not global knowledge - there were rumors, but those who actually saw and felt it, did not always come back to tell. Although the Red Cross visited the concentration camps, the Nazis staged and hid the truth. So the escape from Vrba and Wetzler is critical to saving thousands of lives, but what The Auschwitz Protocol seeks to portray, it is the walk that the two Slovaks took to escape the concentration camp.

We feel true in what we see on screen, because the fact of not using any filter or track to intensify the scenes demonstrates a construction that does not romanticize or embellish what is already painful to see. We see many naked bodies on top of others thrown in sheds as if they were piles of dirty clothes, or Jews buried alive, with only their heads out to then be beaten with a club and trampled by a horse - without suspense, trail and no filter and with other Jews previously witnessing what would happen to them afterwards. Therefore, we deduce that Bebjak has the objective of showing the cruelty of the fact itself, without any external induction trick that is a famous component of the film industry.

Another point of attention, perhaps, even of note. Pay attention to how Nazi soldiers are portrayed. See that they are not personified as if they were thirsty for blood. It is a matter of discernment. They are part of that mechanism, they dance as the music plays. As we watch a soldier whip a prisoner, the scene jumps to another one crushing the skull of one of the buried prisoners. Realize that the violence carried out is something that those who practice it are indifferent to the pain and suffering caused to the victim, that is, for the torturer it does not matter if what he is doing is right or not. It is one of the most terrifying sequences that we are presented with.

The positive point of the work is due to the protagonists who knew how to work the emotion to be transmitted on the scene. And with the help of the camera director, the film was successful, because during the escape of Vrba and Wetzler, the camera does practically everything that the two Slovaks do. Initially, we didn't understand and we thought it was filmed wrong, but it didn't. It trembles, stays upright and slowly resumes its horizontal state. This is to give the notion of stress, anxiety, anguish for not knowing if it will work. The camera shakes and even turns vertically, symbolizing the stress they are experiencing escaping from Auschwitz.

With a photograph of cold, icy tones and dark and lifeless colors, the film shows how perverse the human being can be. And really, there was no reason to have another color palette, since the moment is bleak. The long The Auschwitz Protocolundoubtedly presents us with a new vision of the terrible Holocaust. We see a lot of courage and strength and we realize that we do not have so many productions that represent Slovakia and seeing this story told within something that is already widely known highlights aspects of the 1940s that have never been seen.

Soon, the painful story that Vrba and Wetzler went through and the neglect of international relations gained space in a feature film that needs a strong stomach to see. It is impossible not to feel that pain, to realize how many lives could have been spared if someone with power, had worried and done something. But the most surprising are the credits. It is as if it were a kind of post-credit, when speeches by politicians and world leaders are introduced that practically reproduce what was said at that time of Auschwitz or that deny the Holocaust and pay attention to Bolsonaro's excerpts talking about homosexuals and NGOs. at that moment we realized that violence is a vicious cycle that is in constant practice in society, whether during World War II or today. There is no way to romanticize or deny something that happened in the face of very painful reports.

The Auschwitz Protocol is available on the main streaming platforms for rent and purchase in dubbed or subtitled versions.

April 26, 2021 0
After stealing the spotlight in Suicide Squad, Margot Robbie returned to the role of Harlequin in Birds of Prey: Harlequin and her Fantastic Emancipation, by Cathy Yan. But do you know the character's story? If not, this article is for that. Know what is behind the emancipation of the most fun and troubled character in the DC universe.

Murder on the Orient Express | Much more than a ...