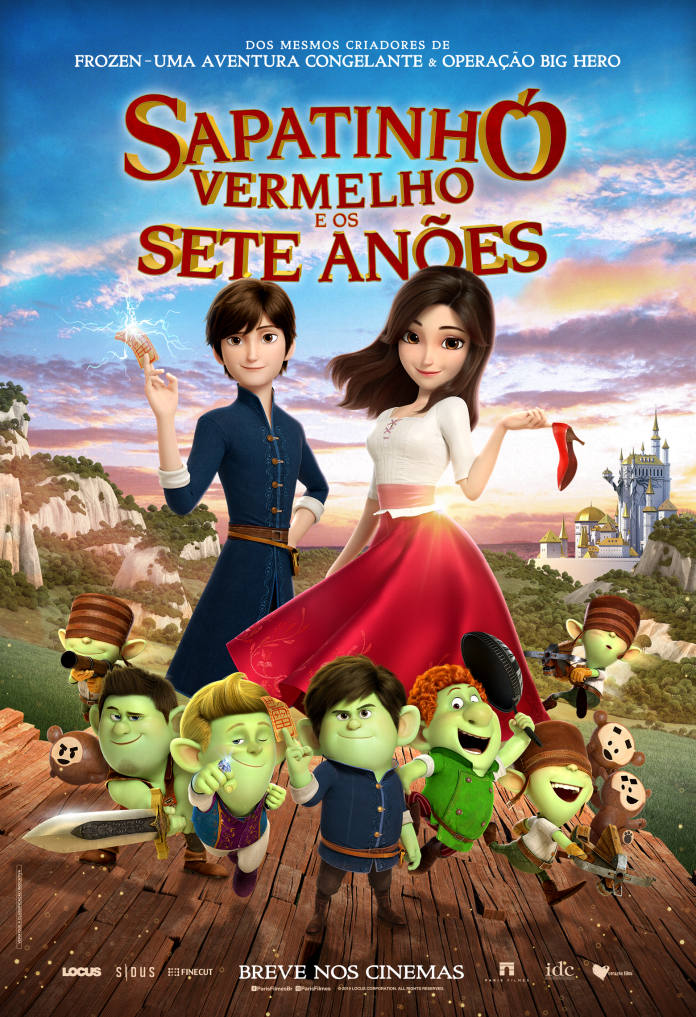 The modern retelling of the classic German fairy tale by the Brothers Grimm is an animated comedy full of romance and action, which will show the appearance is not everything

The classic fairy tale “Snow White and the seven dwarfs”, won a version by the same creators of “Frozen - and Big Operation”. The film hits theaters on December 31st. First of all, it should be noted that the film brings a message and proposes a challenge to us, which is to discuss topics such as the importance of appearance, the superficiality of interpersonal relationships, inner beauty and self-confidence.

The feature would have been released already if it wasn't involved in a controversy. The reason? The “before and after” of the princess who is sometimes fat, sometimes thin. The film is a project by Locus Creative Studios, South Korea and according to the synopsis, the princess embarks on a journey to find her father who is lost, but throughout history he learns to accept and love himself the way that she is, discovering that true beauty comes from the inside out. However, it is possible to feel embarrassed at the beginning of the film and suggests that the film promotes fatophobia and, therefore, we need to talk about it.

By the phrase in the banner "If Snow White were not beautiful and the seven dwarfs were not so short?", Do you understand what the phrase means? Is it necessary to be thin, tall and beautiful to be a princess? No. Beauty is not a standard concept. At least it shouldn't be. And in the reality we are in, a lot of people still care about their appearance. Proof of this are the dwarves who focus so much on good looks and forget that the important thing is character.

Dwarves are actually princes cursed by a fairy that they think is outside the standards of beauty, for them it is ugly. They attacked her because of her appearance and in response she cursed them, they turn green, short and not so pretty and the spell will be broken if they find someone who loves them for what they are, a kiss of true love. And when they see Snow White, they see it as a chance to break the magic. She is beautiful, very beautiful. But they are unaware that this beautiful and thin woman is due to a pair of red shoes that gives the one who wears it what he most desires. These little shoes are from Snow White's stepmother, who has them to always be beautiful and young and who goes in search of the girl to recover the shoes.

Merlin is the male protagonist. He is much more enchanted than the others by Sapatinho Vermelho that during the film, we realized that the girl also ends up falling in love with him. However, we realize that he loves her beauty, not the being that she is. And as much as she likes her "me", she believes that the dwarves will only help her if she is beautiful. They even kiss, but he doesn't have the broken spell because he still has vanity inside him and he doesn't realize that what needs to change is inside him, his heart. And the message is this: we need to love ourselves the way we are and see the other person's interior, his character. Beauty is attractive, but what really matters is the heart.

The film's twist comes when Merlin sees the real Snow White and he doesn't seem to like what he sees. As gentle, wonderful, kind as she is, all these qualities are camouflaged by a more "full" appearance in his vision. He doesn’t snte and doesn’t see what’s good inside. And from the moment that she decides to assume her true self, her true appearance, she shows that it is possible to be accepted for who she is. Beauty is in our actions, in our attitudes and yes, the protagonist is indeed a beautiful character. She is graceful, she is courageous, she is kind, she has many important qualities and that must be taken into account by those who watch. This is a princess that needs to be popularized. There is just no way to be beautiful.

And we see another character overcoming his prejudices. Merlin, who decided to leave, returns, because he realizes that the girl is really beautiful and that she deserves to be accepted by who she really is. Snow White loves Merlin, not the prince he can be, handsome, tall, etc. And he now understands that regardless of appearance it is for him that he is willing to fight, the magic breaks and we see that it is possible to be loved for what we really are.

The feature has some flaws, scenes that shouldn't be there and the soundtrack that could be more neat. However, it manages to convey the message of acceptance, respect, courage, overcoming. It is important to talk about topics like this in a society of such liquid values. The script brings a different footprint to the plot already known and makes us watch more.

One of the most beloved rivalries in history is rekindled when Jerry moves to New York's best hotel on the eve of the "wedding of the century", forcing the desperate event organizer to hire Tom to get rid of the mouse in Tom & Jerry: The Movie , from director Tim Story. The ensuing cat and mouse battle threatens to destroy her career, marriage and even the hotel itself. But an even bigger problem soon arises: a devilishly ambitious employee conspires against the three. An impressive combination of classic animation and live-action, Tom and Jerry's new big screen adventure opens new paths for iconic characters and forces them to do the unthinkable ... work together to save the day.
read more
Reviews

Enola Holmes does not innovate, but amuses and accumulates positive points in several aspects of the plot, making the experience delicious and interesting. Bobby Brown's charm conquers and so she is not only the "Stranger Things" girl, she is much more.
read more
Streaming

England, 1884. The world is about to change. On the morning of her 16th birthday, Enola Holmes (Millie Bobby Brown) discovers that ...
read more