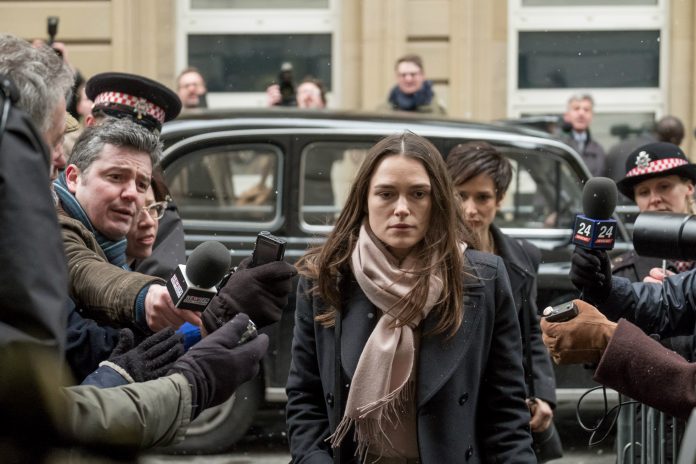 A story of courage and determination.

Featuring a well-constructed plot and a well-planned script, Official Secrets stands out for the harmony between the characters and the way they all worked, which is passionate.

The biographical drama inspired by Katherine Gun, shows how the strength and determination of a woman who wants to avoid the war proposed by the United States against Iraq, due to the events of September 11, 2001, were important aspects for the protagonist played by Keira Knightley had a moving, melancholy performance that would lead us to reflect on various aspects.

The way in which journalists deal with news that initially shocks and involves a chain led by Martin Bright it is indeed challenging. Not everyone believed and objected due to the risks of tarnishing the newspaper's image. Yes, it is a difficult world to deal with. Where journalistic ethics are set aside and the Government's will overrides the most non-negotiable good in the press: the truth.

On the other side, we have the trio of lawyers who very well architect Katherine's defense, who is in the throes of a possible accusation. And in this universe too, we have the ethics of the prosecutors at stake, they want at all costs to make the girl be accused. When in reality, the search is for justice, but we see that some have a distorted look in this regard.

The most interesting thing is that all the characters have a very significant construction and participation. The feature doesn't just focus on the protagonist, but on all the characters, secondary or not, and in a way the stories talk and complete each other as if they were one. The question is simple, it is about preventing the deaths of innocents, it is avoiding an illegal war, it is giving the right to freedom of expression and justice. It is the truth.

It is a production that is worth seeing because it is a work based on a real story, which permeates at a time when fear of a possible war could happen, and the fact that someone does something without wanting anything in return, the courage and determination makes us think about how incredible and cruel human beings can be. It is a fine line that separates the beast from the hero.

Dreams of a lifetime | New Sally Potter movie gets trailer

March 5, 2021 0
The course aims to provide the script professional with a complete training for the exercise of their profession, having as a starting point the FICs teaching method.