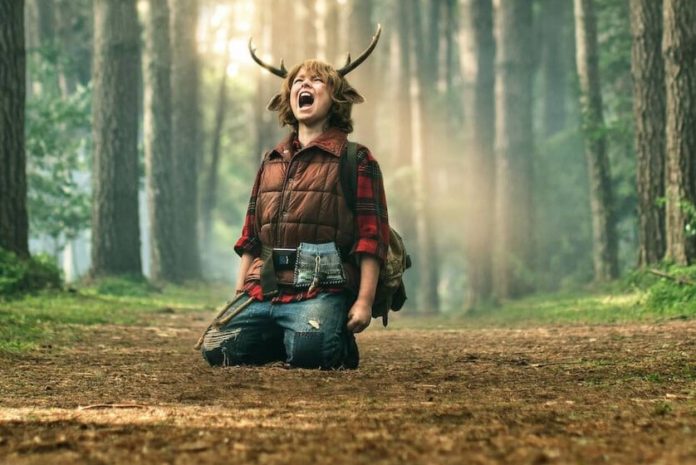 It's Netflix's newest fantasy and it's not to be missed!

Does fiction imitate reality? Will it be? The new sensation of Netflix introduces us sweet tooth, a plot that revolves around the hybrid boy Gus (Christian Convery) who, after living 10 years in isolation with his father Richard (Will Forte) in a forested area of Yellowstone as the world ended around him due to a virus that has spread and caused a pandemic like the one we live in today, he leaves with the unsmiling former football player Tommy Jepperd or “Big Man ” (Nonso Anozie) on a journey to find her mother, in addition to the search for answers, both those related to the emergence of the H5G9 virus, which causes the Scourge disease, along with the appearance of hybrid babies - half animal, half human - and we embark on this exciting adventure, cute, but dark.

Initially, the duo formed by Gus and “Big Man” has that vibe buddy cop. Like this? The productions buddy cop they are action and/or police comedy plots that focus on a dysfunctional duo who need to work together and overcome differences for the greater good. And always at the end of the plot the relationship that evolved continues and here in sweet tooth Gus and Big Man have this chemistry. On the one hand, Gus, a boy who sees everything with innocence and enchantment at every step beyond the dome that was used to being a discovery and a wonder, but something beautiful about this character is his optimistic posture that is part of his maturation process.

“If we can see beyond the fear, we discover what really matters… And we learn that sometimes what separates us can also unite us, because we form our family. Each of us: together!” – Narrator (JAMES BROLIN DE CASTLE)

On the other side, we have Big Man/Tommy/Jepperd/Jep as the big curmudgeon who carries the burden of guilt for past deeds and which we gradually become aware of. But deep down he has a good heart and will do anything to protect Gus. During the production, we see that complicity, companionship and loyalty was developed little by little in a narrative that flows and involves, in addition to moving, of course. Initially, we don't know why Big Man was so sullen and fond of Gus, but we learned that he was a football player, was married and the father of a child, because his wife, in the midst of the pandemic madness, gave birth to a hybrid baby. When Big Man learned that his son was a hybrid child, he was upset, but then he went back to see his son. Unfortunately, mother and son are gone. Soon, we understand Gus' affection, in fact, Big Man tries to protect him as if he were his real son, despite all the deer-boy's antics and stubbornness.

Another friendship formed was with the young Bear/Becky/Rebecca Walker (Stephany LaVie Owen), leader of an "army" that protects the hybrids of humans from any and all harm. The character ends up leaving the group he led due to a fight with the other subordinates to her. Here, this “army” didn't work well, it doesn't have a league, it's a bit out of place with the vibe that the plot carries. She has a complicated and sad past as well and in the plot we see that she occupies a position of elder Iran. She is strong, determined, but she is a girl haunted by fear of losing everything again and this makes her distance herself from some characters. Another event outside the narrative curve is the couple who, in the second episode, helped our outsiders. In fact, they served as a bridge to welcome them, but the friendship built with the couple's son was so real that it left us waiting for it to be resumed, but I believe we won't see it so soon.

When Gus and Big Man team up with Bear, the angry teenager and former leader of the army of young men dressed as animals, the plot becomes more fun as the girl hates adults and wants to protect Gus in every way, always suspicious of Big Man, but soon she realizes that everything is not always white or black, there is room for gray – think about it?! The trio, which has at its base some fights and misunderstandings, creates the essence, the soul of sweet tooth which, by the way, is Gus's nickname for Big Man, as he's a sweet toothy ant, working very well together and apart as the season offers good subplots that happened before, but which are revealed in specific scenes and episodes and a more than positive point is the use of flashbacks that do not weigh on the narrative.

"Indeed, there are times in life when Time is kind to us: when it gives us one more second, one more minute, one more moment with those we love." – Narrator (James Brolin of Castle)

Jim Mickle's script manages to involve and this shows that he knew how to work between evil and good without romanticizing and without excess or appeal. We realized that everything around Gus is permeated with peace, tenderness and love, as he is a special boy and it will be his task to save the world. Also, we learned that it was not commonly generated. Its name GUS - is an abbreviation of the acronym GUS 1., which has meaning Genetic Unit Series 1 (free translation, Genetic Unit Series 1). And the plot doesn't deliver that right away which was very good, because when Gus finds out, seeing him sad and angry at being tricked, feeling helpless, fatherless, motherless, makes the character arc be more interesting, after all, nobody is calm all the time, right?!

This similarity may seem bizarre, but we see that in the series, experiments are done with hybrids and when they are captured, they are sent to be dissected and such, as they believe that hybrid babies are the cause of the pandemic disorder. And this question of their being used as guinea pigs for cruel experiments reminds us of the Jews in the Nazi era when many were subjected to various experiments. Another interesting detail is that through one of the flashbacks, we see a laboratory with chicken eggs and if you watched the documentary series The Race of Vaccines (2021), from Globoplay, noted that researcher Natália Pasternak explains that the vaccine against Covid-19, which is being made by the Butantan Institute, in São Paulo (SP), will be made from chicken eggs. Cool huh?! Fiction and reality go hand in hand. And we are left with the question: are they really to blame? Where is the origin of the virus and babies? We have a suspicion at the end of the series, but only a sequel can confirm it.

"Don't ask a question if you don't want to know the answer!" – JEPPERD, Tommy.

The beautiful photography of the scenery and landscapes of New Zealand (Oceania), the country chosen for the shooting of the scenes, is highlighted here by the vividness of the colors, always in a cheerful footprint. the work of Robert Downey Jr. our eternal Iron Man as the executive producer is amazing. Besides him, his life partner and behind the scenes, Susan Downey, concurrently with the writing team. The entire direction and script team worked very well. We were able to feel the final message of hope and love that was an intrinsic part at all times, of course this happened due to the happier and more fantastic tone chosen for the adaptation, as the homonymous original work, created by Jeff Lemire (Animal Man), in 2009, by the Vertigo, a subdivision of DC Comics, has a more footprint dark and violent.

In terms of villains… it could be better. Here we are introduced to The Last Men who hunt hybrids under the command of General Steven Abbot (Neil Sandilands). The character, always in dark clothes, flashy red glasses and a big beard, looks scary, but his lines don't exude fear. This makes him more of a caricature than a good villain. His "cruelty" was only in what he did as kidnapping the cute creatures for dissection until he found a possible cure for the disease and extermination. But this underdeveloped, bearded bald man lacked seasoning. But we can understand that hybrid beings had a prominence, when they were represented as the excluded and, perhaps, that is why the evil here was not so explicit. Also not to be gloomy, as it is a fantasy.

The secondary ones are shown throughout the narrative which, in the end, connect due to the capture of hybrid children like Dr. Aditya “Adi” Singh (Adeel Akhtar), alongside his wife, Rani Singh (Aliza Vellani), and shows that he abandoned his medical profession after the Scourge was spread and attacked his wife. Since then, he has only thought about taking care of Rani, but ends up being surprised by the villain, the General, who wants a single cure for the disease, through a vaccine, as a new wave of contamination is imminent (coincidence or not, Brazil is on the same path). He is now between the cross and the sword, for will he be able to produce the substance? Would he be able to resist not killing the hybrids? Has his ethics been corrupted? The General is unaware of a man of ice, although it is not that scary, he is unaware of morals and ethics. is non-existent. Another interesting character, Aimee who, after being confined for long months to protect herself from the H5G9, discovers the true purpose of her life: The Reserve – a place to house the hybrids.

Ending and no less important was the emergence of Gus' "mother", Birdie (Amy Seimetz), being in Alaska. From the beginning we see an unrestrained search for her and we are led to think that she is dead when she is not. She answered Bear's walkie-talkie, serving as a hook in the final minutes, the famous cliffhanger, for a possible and obligatory second season. On top of that, the series delivers an incredible soundtrack that runs from Ludwig van Beethoven to Blondie in a characterization that features a story in road movies, in which the protagonists are always moving in a physical territory, while the narrative also has its follow-up. It is worth checking sweet tooth.

0
In a gastronomic world dominated by male chefs, discover who are the women who are transforming this scenario. A global journey that explores the strength of women in gastronomy, in the most varied cultures and existing realities.