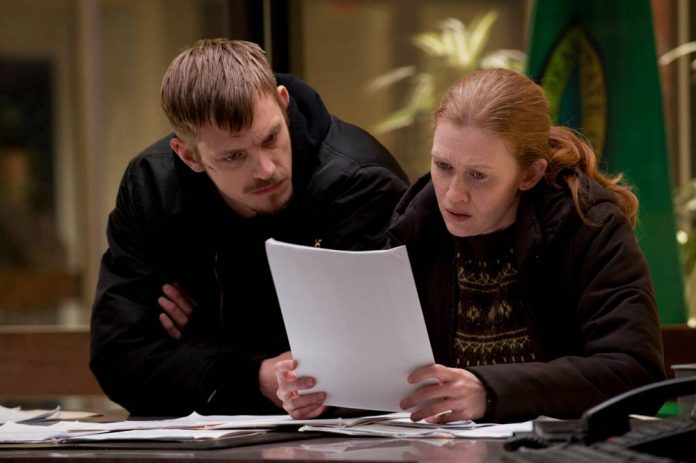 The first season of The Killing carries a heavy atmosphere with somewhat oppressive photography, exceptional performances and a script centered on the psychological aspects of the characters and which decides not to focus on resolving the murder of Rosie Larsen by giving way to a sequel. Although, 26 episodes are too many to deal with just one murder, the series maintains suspense, impresses with the successes and surprises by the flaws that become glaring.

Read too Criticism | The Killing - Season 1

The chemistry between the characters of Mireille Enos and Joel Kinnaman, who make up Seattle police detective Sarah Linden and Stephen Holder, is still strong and engaging, Veena Sud, creator of the original Danish series and showrunner the American version, unfortunately, got confused and made some notable mistakes. The second season causes the detectives to neglect themselves and start investigating the whole city as if it were a game of “trial and error” and this broadens the scope of the detectives' hunt, with more political depth, more barter going on at higher ranks and more drama with the characters. However, everything in a slightly superficial tone, did not keep the footprint of the first season that showed something profound, as if it were at the bottom of the well of each sphere covered in the series.

This confusion may have been due to the fact that AMC canceled the series at the end of the second season, perhaps precipitating some script decisions or because the original Danish version had the structure of a crime per season. In the American adaptation, the investigation of Rosie Larsen's murder spans over two seasons and it gets a little dull and uncomfortable that you can't get anywhere with so much investigation, it's too much of a hit.

Despite the speculations in the previous paragraph, there is no concrete reason for the gaps in the psychological construction that was so well addressed in the first season. In this second season, the psychological side was not left out, however, it exists in a more simplistic way, kind of black and white. It was time to get out of the box and look for the “gray”. For example, over the course of the first season, we saw that Linden has a painful past and this has had consequences in his life. She is constantly struggling not to lose custody of her son Jack (Liam James), however, remains deeply involved in Rosie's case. In addition, she has an obsession with an investigation of the past.

Solution found by the script and direction team? It takes Jack out of the picture, sending him to live with his absent father and who has now decided that he wants to participate in his life and throws Linden into a psychiatric hospital where she has to mandatorily expose her difficult past in psychiatric sessions. Where is the organic dynamics of the first season? For that example, we realize that we women are treated as if we were crazy. From then on, the frail-faced woman with a heavy countenance who finds herself consumed by the paranoia of not knowing who to trust as she discovers elements that point to the involvement of members of the Seattle police itself and the top dome of local politics. in the conspiracy. In this sequence, Linden needs to prove himself more and more and this causes the character to be discredited, to be considered crazy, when in fact she is doing her job in the best way that she can.

In addition to Linden being ridiculed, Holder character of Joel Kinnaman, also suffers from the consequences of his stupid acts. In addition to him disrupting his relationship with Linden and making them waste time with his messes, we were aware that all this mess was motivated by a promotion promise if Holder was part of the scheme that would direct the investigation to Richmond and that also explains his semi-desperate efforts to manipulate Belko and convince him that he 'got' the right guy. Here Holder was portrayed as a puppet and in one of the most emblematic episodes, he realizes what he has done and seeks to do things the right way. That's where production gets it right. I didn't need him to do so much shit to make that decision.

However, we can understand that the fact that they have transformed The Killing in a production in the CSI style or so many others not to be canceled… it just didn't work, because it took away the essence and right after the third season, the second cancellation took place. It was a total shot in the foot.

However, other things contributed to the superficiality of season number 2. Rosie's mother, Mitch Larsen (Michelle Forbes) is set on an aimless search, perhaps, to get away from the pain caused by her daughter's murder and to remember who really is, your dreams, wishes and etc. But with that she earns the title of bad mother, because she hit the ground when her younger children and her husband needed her as the emotional base of the Larsen family. However, this search for resilience or escape from pressure, was not very well developed and ended up resulting in nothing. It was just a walk.

The father, Stan Larsen (Brent Sexton) falls by parachute into the lap of his former boss, the Polish mobster Janek Kovarsky (Don Thompson) and brings up an old murder that comes to haunt you well in this difficult time. Putting the pieces of the family together, comes Mitch's sister, who developed a complete structure to support her nephews and brother-in-law and she was the one who was part of the murder of her niece ... HOW CAN THIS BE EXPLAINED, PRODUCTION? How did an emotionally weak character develop this fanciful structure? Not to mention the kiss between her and her brother-in-law, Rosie's father ... very cliché.

The family bow itself was chewed and thrown away. The controversial appearance of the character Nicole Jackson (Claudia Ferri), the indigenous chief who manages the casino Wapi Eagle, painting her as the devil himself. A malaise is created, an unnecessary roll involving the departure of the old chief of police and the entry of a new one, Erik Carlson, lived by Mark Moses. In addition to making the viewer believe faithfully that Darren Richmond (Billy Campbell), the Seattle mayoral candidate shot at the end of the first season can recover from all the shit that happened to him in 48 hours and come out totally intact and resilient to his campaign that is going through its worst moments. One thing that is disturbing is the fact that he doesn't say what he did on the night of Rosie Larsen's murder. What worries him more is a suicide attempt than a murder that he is being accused of and that he did not commit. Does not make sense…

We can't forget the boyfriend otaku de Rosie, who is involved in the plot to seek revenge and in the end it is taken in the same way as it was put into production. All these details that happened, it was exactly to create a mess and to wrap the plot and the worst of all was to have made Linden and Holder cat and shoe in search of a murderer who was in their faces. Patifaria !!! The fact that the series was chewed and spat out with a heavy script, involving those flashbacks and an atmosphere a little distant from the first only made the production more of the same.

But even with all this bizarreness created in this second season, the revelation of whoever killed Rosie Larsen makes perfect sense and was surprising. The way in which the discovery takes place is quite laborious and complex, but there is a positive side to the revelation and the non-inclusion of a new character to be the “killer” of the girl was well thought out even for the reason that Linden and Holder were introduced from rincipio to murderers.

With the first season, we realized that the focus is not on the resolution of the case but on how the process takes place. However, this season we see a mess, a season with many holes of logic and cliché situations, such as explanatory monologues, supporting characters that appear out of nowhere, deductions at the time of amen for the series to be successfully concluded and the “secret” factor makes the ending empty.

An important fact that we can highlight is that the series aims to focus on the counterpoints of each event and the fact of portraying the female characters in a potent way as hierarchies and human beings in the middle of 2012 is very important, as we see that the concern in put women in a prominent position. In case you haven't paid attention, in the opening credits it's Mireille Enos' name that comes first, it's the character Linden who appears in the opening, in the car, walking and running. Yes, she is a woman and, therefore, the discontent of those watching the second season is so visible that they have made a FOD * character, a ridiculed character.

March 30, 2021 0
Collection is a limited edition that will be sold exclusively via RazerStore.com in the countries where the online store is present.

Review: Bates Motel- And it all comes to an end