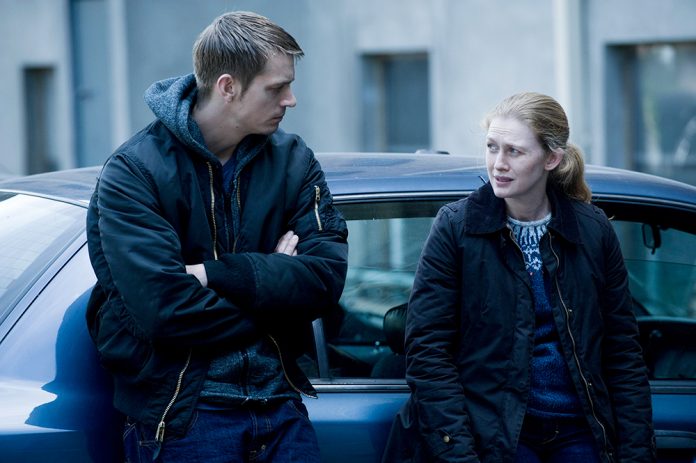 This third season is like a new beginning for Linden and Holder. With the Rosie Larsen case resolved at the end of the second season, we see that Detective Sarah Linden (Mireille Enos) went from heaven to hell several times and was sometimes rescued by partner Stephen Holder (Joel Kinnaman), which was also rescued from the well by her. Consequently, Linden decides to leave the police in search of a calmer life and Holder, on the contrary, now has a purpose in life and moves on in his career more honestly.

After the series suffered a cancellation by AMC at the end of the second season, the series returned with the third season. There was a negotiation between Fox and Netflix, and a new case emerged, however, it is not a story with a loose and independent point. In the passage of time, we see that a year has passed and Holder and Linden live lives different from the ones we know previously. Holder has a new partner who is already experienced, Detective Carl Reddick (Gregg Henry) and Linden works in the port, has a boyfriend, a slightly bucolic house on an island and a joy that has little to do with her.

Read too Criticism | The Killing - Season 1

Here the recipe doesn't change much. We noticed that some aspects of the previous seasons are present in this season. The script brings back a ghost that haunts Linden and that same ghost is part of this new murder of young prostitutes that Holder, accidentally or not, makes the connection with. modus operandi of the murder that was responsible for Linden's visit to the sanatorium referred to in previous seasons.

Leaving the peaceful life behind that he forced himself to live, Linden returns to his true life. She is a police officer and will not cease to be. She is obstinate, dedicated and obsessive. Those are its characteristics. This year that she was living on the island, it was just an escape, a way of seeing herself in the normality imposed by society. However, her strong personality and the question of whether the current killer was the same as the one she chased a few years earlier was what brought her back, acting alongside Holder and working under James Skinner (Elias Koteas), her former work partner from the time she investigated the murder that left her unbalanced. In fact, she had a “affair”With Skinner.

That "come back”The past seen in some scenes in previous seasons is a positive point. The idea is great and brings cohesion to the production. No new, random murder. There is, in Linden's head, an obvious connection, but a connection that she cannot make, especially since her old investigation came to a resolution and the murderer was arrested and is now on death row 30 days from being dead. And in this parallel plot, a month before Ray Seward, played BRIGHTLY by Peter Sarsgaard, is the pearl of the season. Linden and Holder are very well on the scene, but Ray Seward is the one who steals the spotlight. Now, in the race against time, Linden and Holder try to avoid Seward's sentence and find the real killer, however, the almost minimal possibility that one case is linked to the other makes things difficult.

Read too Review | The Killing - Season 2

In parallel with the investigation and death row, we are presented with the real life of the streets. A frightening, cruel, cold reality, surrounded by contempt and poverty. We see boys and girls prostituting themselves for money to survive. Young people who for some reason have fled their homes and find support among them and the few people who try to help them. This season, the rain leaves the scene, which makes the heavier atmosphere difficult to swallow.

This season brings the essence of the first season. It was not just Peter Sarsgaard who shone in this production. The young actress Bex Taylor-Klaus, playing the moving role of the young masculine prostitute Bullet, who tries to get close to his passion Lyric (Julia Sarah Stone) while being strong and intelligent, creating a strong bond of friendship, however, hesitant with Holder. And we see something repeated in the work, the nucleus in three focuses. The photography with shades of gray, very intense emotional charge, some characters struggling to survive, to leave the streets, against insecurity and madness, in addition to the struggle for survival.

And in the midst of this chaos, we see It is us and Kinnaman with acts of envy and forming an excellent pair of detectives that we see little out there. We are sure that they are flawed characters, that little is expressed or show feelings, but that we know that, behind the thick skin of each one, there is a sea of hidden emotions. Peter Sarsgaard is also wonderful as the prisoner Seward who walks to his death. But this character is intriguing, he moves whoever watches and makes us feel pain, even though he is a murderer, an aggressive man and we are aware of that in the scenes where he is insane ... a proof of that is death by hanging that he asks for instead of the lethal injection. In addition to other more terrible moments and we see his free, slow and painful fall that causes anguish not only to him and to those around him, but to the viewer as well.

Despite returning with breath, The Killing slips in places. O storytelling it is a bit complex, problematic, with disconnected facts and bringing some plots that would not fit as showing too much to the lives of death row jailers who, for several moments, seem to be there only to serve as sausage filling. However, from the second half of the season onwards, we see a more balanced coherence. But moments on death row require patience and understanding even with Sarsgaard's impeccable work.

The positive point of the plot is the resolution of the plot in an organic way and resolves itself this season. The season has a very good rhythm, here we do not see the passage of time for one episode per day, but time jumps that help the narrative flow and make the viewer not die of anxiety before the case is resolved. I emphasize that the discovery of the murderer is surprising, since no one would believe that such a character would be able to do something like this. Unfortunately, a charismatic character had an end that, perhaps, for any second could have been different, but it was not. It ended in the same way that the series started, in a trunk of a car.

Todxs We | HBO's production is a great portrait of ...