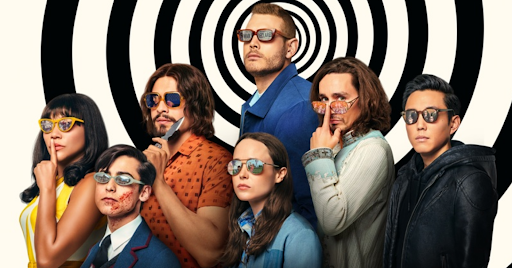 The first season of Umbrella Academy fulfilled one of the main objectives of an adaptation very well: to bring an audience to the original work.

Due to the success of the first season, the series won its second season, which came Netflix. The series tells the story of an eccentric millionaire Reginald Hargreaves (Colm Feore) who bought 7 children who were born at the same time, and each had a different skill. Since childhood, the seven brothers were trained as heroes and learned to master their powers and become the Umbrella Academy.

The central plot of the first season revolves around the family trying to prevent an apocalypse in 2019, and they succeeded, but this led them to the 60s, and that is where the second season begins.

The 1960s in Dallas, where the family was sent, were very lively, with several historical facts, including the death of President Kennedy, and this fact becomes one of the threads of the plot.

The series genetically criticizes issues such as racism and homophobia in a subtle way, and several times the time travelers themselves draw the parallel between the two eras and demonstrate how society has not evolved or matured these issues.

The arc of Alisson (Emmy Raver-Lampman) and Raymond (Yusuf Gatewood) is one of the most stifling and well-built, showing a little of the struggle for equality in the period of civil rights. There are other historical elements used throughout the series, and characters like Jack Ruby (John Capelos), the man who killed President John Kennedy's assassin.

The second season is much more intense than the first, as it presents several parallel arcs to be developed, and manages to do this very well, until the exciting ending and farewell of some characters.

The team members manage to get more space in the plot, and start to have a deeper story and a greater emotional charge within their attitudes, and with this longer screen time, we have the opportunity to discover their real motivations in the previous season.

In addition the series shows us a little about the characters' past, and a little more about the troubled childhood, and even with all the problems in this second season we have the team working in a more organic way, and spending more time together.

It is not just the protagonists who make a series, the secondary characters are also extremely important for the plot to unfold, with a special emphasis on Lilla (Ritu Arya), which should have a little more of its history explored during the series.

The episodes are all very well balanced between action, suspense and humor, and this makes the 40 minutes of each episode pass quickly and always with engaging hooks.

And as it could not be otherwise, the story leaves an exciting hook for the deserved next season.

Written by: XXXX When asked to write about thematic series for yellow September, I have to confess that I was a little lost. I thought:...
read more
News

The Umbrella Academy: Check out the official trailer for the series