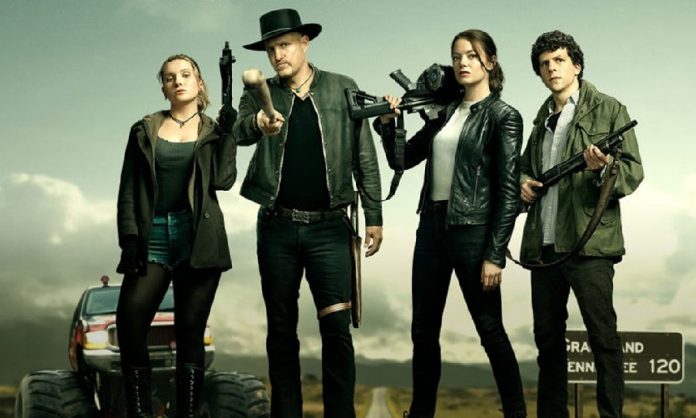 Launched in 2009, Zombie it was a striking parody of zombie films that won over audiences and drew lots of laughs. With a very specific and closed history, it was difficult to imagine a quality sequence (especially if you take into account Amazon's failed attempt to create a series derived from the film). Ten years later, we have the continuation. Entitled Zumbilândia: Shoot Twice, the feature impresses for being able to maintain, and perhaps even surpass, the quality of the first.

The plot returns with Wichita (Emma Stone), Tallahassee (Woody Harrelson), Columbus (Jesse Eisenberg) and Little Rock (Abigail Breslin), who during those years between the first feature, lived with a monotonous - dysfunctional - family surviving in a post apocalyptic world. Their lives have not evolved much, but Zombies have. There are now different types, which are categorized by their abilities and present new threats.

When Little Rock gets tired of being treated like a child and all that monotony, she decides to go on an adventure in search of people her age, forcing the rest of the gang to try to find her and, on the way, run into dangers, new people and , of course, many zombies.

By increasing the number of references and sarcasm in relation to current pop culture, the script manages to entertain and amuse the viewer. Playing with the tireless wave of works involving the undead and the very success of the first film, Zumbilândia: Shoot Twice it is a remarkable production and surprising for using the same formula again and being able to overcome the result.

The main elements - and even some scenes - are used again here. The famous rules, visually eye-catching moments and punctual fun are back. The new characters appear as a great reinforcement, without taking away the shine of the main group, just giving new arguments for the adventure, but keeping the focus on the strange protagonists that have already conquered the audience.

Zumbilândia: Shoot Twice it does not innovate in its script, it only repeats what had already worked, gradually growing in the correct points. Proving that lightning can strike twice in the same place - and perhaps even do more damage - the film is sure to please fans.

Crítica | Reapresentando A Costa do Mosquito (1986)

March 11, 2021 0
The streamer, in love with games since he was 6 years old, overcame prejudice with his motor difficulties and performs daily lives on Nimo TV.

The Curse of Audrey Earnshaw | Watch the trailer of the interesting ...