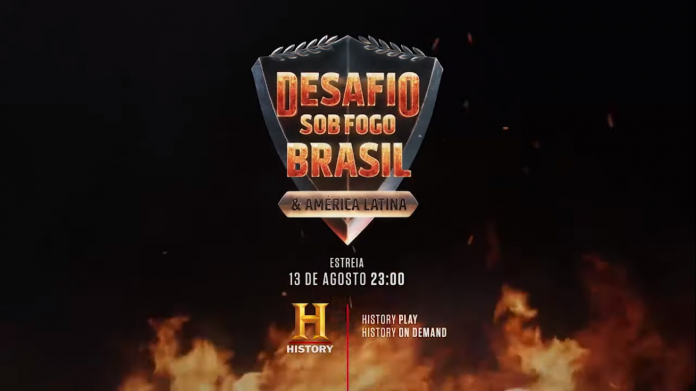 Season leaves, season enters and the central objective is to exalt the forge as art

The series Challenge Under Fire surprised by the great appeal it has with the Brazilian audience. The first two editions were won by Brazilians Tom Silva (2018) and Daniel Jobim (2019). This motivated History to do the third season with half of the Brazilian participants (the rest are from Mexico, Argentina and Colombia), entitled Challenge Under Fire Brazil and Latin America, and with a novelty: for the first time a woman in the competition, Juliana (ES / RJ). The other participants from Brazil are Cléber (DF), Sandro (RS) and Milton (PR). Another highlight is the Brazilian judge, Ricardo (SP), who currently lives in the United States.

We talked to the participants Cléber Melo and the Juliana Baioco who told a little about their experience during the recordings and what they expect from this challenge, which by the way is already part of the program title. But what challenge is this? Inspired by the “Forged in fire”, the American “original”, it is a reality show that has cutlery as its flagship, which is nothing more than the activity that involves the manufacture of cutting instruments. And if you thought it was a prehistoric practice, you are wrong ... Juliana took a course believing that she would make a knife once in her life and after that she fell in love and never stopped.

It is such a surprise to find out that he was accepted in the competition's casting. But the participants really only realize this, it is when the "coldness" hits the belly, as participant Cléber Melo tells us, who left the technology to venture into the cutlery. Married for 14 years and father of two children, aged 10 and 12, Cléber started in cutlery as a hobby in 2009. In addition to a course at the University of Brasília, he also won the Best Beginner award with his first full knife at Salão Paulista Cutlery, in 2010. He started to specialize and acquire equipment. For eight years he taught classes in handmade cutlery, three years ago he definitively exchanged technology for cutlery. At events, he makes demonstrations of forge, handmade knives and the cool thing is that he promotes sweepstakes with small pieces forged by him to the people who are at the fair / event.

"Participating in the program will be a leap in my career." - cléber

Currently, he has a professional workshop in Brasília and sells three to four pieces, including knives and pocket knives, per month. It receives orders from all over Brazil, from simple orders to personalized knives, with noble materials. According to the cutler, his main activity is cutlery and it was through television that he became aware of reality and that he saw himself participating until it became reality. When asked what would be his mark left in the competition, Cléber replied that it is cutlery as art. Remembering that he offers a cutlery course and points out that with dedication it is possible to go far.

“A well-made knife can span generations. It can pass from father to son, grandson, great-grandson… What I hope to leave as a mark is cutlery as art. ” - Cléber

The other participant is Juliana Bioco who is the first participant in the competition. Professor of Petroleum Engineering at UFRJ and practitioner of extreme sports, Juliana became interested in cutlery while watching Desafio Sob Fogo. She fell in love with the series, which motivated her to take a cutlery course in Rio Grande do Sul, in February 2019. After the course, she set up her own workshop in Rio de Janeiro, a shared space for cutlery and joinery. And he went further: he started attending events in the area and making contacts. He became a cutler for hobby and sells the knives he produces too. According to the cutler, she was invited by the casting to participate in the program and she wondered if she was prepared for this great challenge, but it was just trying and she managed to become one of the participants or better, the first female participant in the program. This detail is interesting, as many may question that it is an activity that requires physical strength and has a woman performing such activity. Examples like these encourage more women to become interested and show that a woman's place is anywhere, wherever she wants.

“It was a surprise to have been chosen and a very big responsibility to be the first and only woman to participate in the program. As in engineering, which is mostly performed by men and it is my profession, this helped me to face the experience in competition, naturally. It is a human being there doing a knife or any other trade. But I confess that it is an extra responsibility, it is representing women there, in the competition. - Juliana

Juliana, says that her baggage acquired from engineering helped her a lot as her knowledge in metallurgy, in steel, understanding the mechanism of the knife, heat treatment, Mohs scale (quantifies the hardness of minerals, that is, the resistance that a determined mineral offers risk, that is, the removal of particles from its surface), in addition to other learnings that are like a support for the practice of cutlery. Despite this, she points out that the dynamics are totally different. While in the classroom the effort is minimal, in the workshop the level of danger is very high, the noise and attention in sparks, in the subjects is completely different from the academic routine which is a little lighter.

The challenge really lies in the clock, time and pressure are factors that exert great power on competitors. Thus, as in gastronomic realities, time does not stop and becomes a peculiar experience and nervousness at the top can interfere with the emotional and psychological during the tests performed. It is necessary that the candidate has confidence and knows how to maintain balance in the face of challenges in order to remain competing until the end and for everything to go well.

Finally, the most important thing is to highlight culture and art. Both participants affirmed that each piece is exclusive, there is no other equal and, perhaps, this is what makes the competition vibrate and be different from the other existing realities. It is not just about strength, but about concentration, creativity, care and chameleon skill cries out in this competition, after all, adapting and executing all the steps with the clock ticking in your ear, is not for many. The program shows that each competitor has a unique opponent and that opponent is the competitor himself and this shows how strong a person can be and how brave he is to challenge himself in this way. It is dedication, willpower and passion, as Juliana said, that makes the challenge pleasurable and the victory won. The third season arrives putting pressure and with a strong cast in History, next August 13th.

Edgar Wright and Ansel Elgort talk about 'In Rhythm of Escape' ...