During the Bienal de São Paulo we interviewed the authors Miss Nick and Bettina Winkler, who were signing his book Grim Reaper- Journey of Death.

Let's start by telling you a little bit about the book's history, with words from the authors themselves:

The Book is about a girl who had an accident, her name is Amy and lives in San Francisco with her father. On vacation she was with her mother, where she took a speedboat and ended up having an accident where everyone died and she mysteriously ended up surviving and being taken to the hospital. After that her perfect life started to change. She started seeing shadows, being chased by a hooded guy and always seeing people dying. It was as if she were being drawn to death. Then she meets James, a schoolmate, that she befriends. She has an interest in him, but she doesn't say anything, she thinks it's normal, that he's not for her. Then she discovers that James has more to do with what happened to her than she imagines.

The work is a fantasy drawn to terror, with supernatural elements. The two wrote together and when asked about what it was like to develop a book together, they said:

“In the beginning it was pretty easy, but it just got more and more difficult. We have very similar ideas, we like books like Mortal Instruments, The Vampire Diaries and those 90s things, you know? Then I thought I wanted to make a supernatural fantasy, we exchanged ideas and that was how the Grim Reaper came about. ” 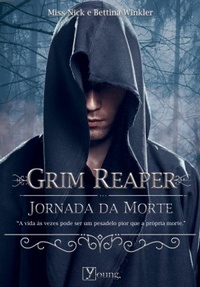 The Book is the first volume of a trilogy. According to the authors, “It was inspired by Mortal Instruments, by Cassandra Clare.”

The plot takes place in San Francisco, according to them "A lot of research has been done before, it is very difficult to just know about the location without having traveled there, you need to see images and have a visual reference."

To learn more about Grim Reaper- Journey of Death click on here.

Review | voices from the past

Caetano O'Maihlan launches an interpretation course on the Chubbuck technique

read more
© Copyright Thunder Wave 2012-2021 • All images of films, series and etc. are registered trademarks of their respective owners.
Posting...

The woman's place is where she wants, including in games

Interview | Mauricio de Sousa tells about the success of his ...

Interview with Bruno Capelas, author of the book Raios e Trovões: A ...