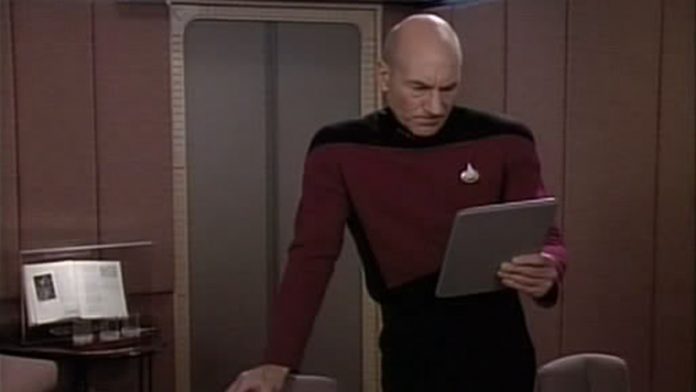 In this second and last part, you'll learn a little more about Star Trek technology!

Like trekker I've always had a card, I decided to do like the big ones chefs and leave the best for last. And to start with the most prolific universe in space, the final frontier, I'm going to start with a controversy, making a comparison.

Read too: The Technology of Star Wars and Star Trek – Part 1

As a trekker and science fiction fan, one of the funniest and most anthological scenes of all time is the hospital in Star Trek 4 – The Return Home. the always curmudgeon Doctor McCoy, the heart of the Trinity where the Captain Kirk represents the strength and the Mr. Spock logic and reason rages when the poor old lady lying on the stretcher tells her she is awaiting hemodialysis. our good doctor asks "What is this, the Dark Ages?", before giving her a pill and asking her to call her in case of another problem. In a later scene we see the old lady adorably happy, saying "the doctor cured me".

Everyone knows that the Captain Picard has an artificial heart, and that geordi uses a viewfinder to compensate for its disability. And even in the episode ethics from the fifth season of The new generation, Worf is paralyzed after an accident, with all the consequences even more devastating for a Klingon in this condition, before eventually walking again.

I am a firm believer in this aspect, science fiction with an optimistic vision of the future, in which scientific and technological development will be able to solve many of the problems we face today.

I mentioned in previous article the cell phone that was created thanks to communicators, just an example of what was shown in Star Trek inspired scientists to create their equivalents in our reality.

That's why, when a few months ago a website questioned the presence of a wheelchair user in Star Trek Discovery, in part I gave reason to your complaint. Genetic research is one of the fastest advancing in our world, and it really is already capable of solving many of the problems that afflict us. People who have had accidents have regained movement with greater frequency, and everything suggests that in a few decades, perhaps even in a few years, the first therapies and treatments capable of recovering more serious levels of paralysis are available.

That's why the author of the aforementioned site said that there would be no reason for the presence of a wheelchair user in Discovery. It can be argued that he was perhaps under treatment, perhaps he was a native of a low-gravity planet and opted for that way of getting around, or even had a more serious problem, such as the captain pike, who was the victim of damage too serious to be repaired.

The point I make is: yes, we will do everything to have diversity and inclusion (and Star Trek it has both since 1966, it is good to say) but we will not have the inspiration, the capacity to dream, to do better, and to see a much better future of our beloved science fiction. And speaking of dreaming, let's dream then of something that, surprisingly, has nothing impossible!

bending speed. Yes, the most fantastic concept of Star Trek, the one whose mere mention makes the stars and perhaps the entire Universe accessible to us! Because the principle of this technology used by the Federation in a common way (and not so different from hyperdrive in Star Wars, let it be said) is based on solid science. More precisely, in the Albert Einstein's Relativity. The German genius postulated that space and time exist as a single entity, continuous spacetime, the fabric of which reality is made. And just like a tissue, it is deformed by the presence of mass.

Ask two friends to hold a tablecloth, and slide a heavy ball onto it. This is exactly how the Universe works.

Take a smaller ball and let it get closer to the bigger and heavier one, and you'll see how the Earth and the other planets orbit the Sun. Gravity warps spacetime, as Relativity predicted. And one of the consequences of the equations of Einstein's theory are the so-called Einstein-Rosen Bridges, an extreme deformation of space-time, with which it would be possible to cover immense distances in the universe in a very short time. We call these bridges today wormholes.

It is still necessary to talk about the speed of light, 300,000 km/s. Nothing, nothing at all travels at the speed of light or faster. As the great scientist and science popularizer Carl Sagan said in Cosmos, there are no speed limit signs or penalties for violating this rule. It is a fundamental law of our Universe, conform.

However, the warp speed deformation of spacetime was studied a few years ago by the scientist Michael Alcubierre, who elaborated a theory pointing to the practical possibility of the warp speed. Initially the amount of energy to achieve such a feat would be colossal, but new calculations from other scientific institutions have shown that the requirements can be met with a smaller amount of energy, which can lead to practical bending speed. I presented a more detailed article about it, by the way, on the website Aumanack.

Even in space travel, the extraordinary Voyager Mission. These two ships were launched in 1977 taking advantage of a favorable position on the outer planets of our Solar System, and number 2 went through all four gas giants, completing the Grand Tour plan imagined in the 1960s. aumanack I published a detailed article about them.

It was only two Voyager built, which inspired the number 6, or V'ger, in Star Trek – The Movie. THE Astronomy Magazine January 2013 published an extensive article about them and their discoveries, which ended like this:

“The Grand Tour of the Solar System (and beyond) continues. The explorers are two ships that have achieved all the goals planned for them, far surpassed their life expectancies, and adapted to new expectations by evolving technologically. And indeed, 36 years after their release, and 31 after completing their primary missions, Voyager 1 and Voyager 2 continue to boldly go where no one has gone before.”

Recently the Voyager 2 he repeated his sister's feat and also entered interstellar space. So it's our first two starships!

One thing that may make interstellar travel possible in the future is another concept of Star Trek, the antimatter generator. It basically works with the mutual annihilation of matter and antimatter, the most efficient reaction we know of. Readers should know that the matter we know, that is, we, the objects we use in everyday life, the planet, etc., is composed of atoms, and these are elementary particles. The positively charged protons are gathered in the atomic nucleus and "glued" together by neutrons, particles without electrical charge. The electrons, in turn, with a negative charge, orbit around the nucleus.

This notion of the atom as a miniature solar system, by the way, has already been superseded, as it's all much stranger than that, and even such particles are made up of even more elementary ones, the quarks.

You can search about it, the Internet is there for that, agreed?

Antimatter, on the other hand, is basically the same thing with mixed signals. Neutrons hold negatively charged antiprotons in the nucleus, and positively charged positrons orbit around. Astrophysicists still do not know why our Universe is made up mainly of matter, and studies on this are continuing. Here on Earth the production of antimatter is done in particle accelerators, but nature produces antimatter. The example given by the blog of Unicamp is that of a banana, in which radioactive potassium isotopes emit an antiproton, on average, every 75 minutes.

But no, we can't wait to pick up this particle. In a very short time she finds a proton and both annihilate each other, leaving only radiation. In particle accelerators, on average, every 10,000 collisions of protons produces an antiproton. That's why antimatter is extremely expensive, with an estimated price of 24 trillion reais per gram! It will take a while to fill the Enterprise's tank... The Unicamp blog tells more , click here and check it out.

On top of that, storing antimatter is also difficult, as you can't fill a bottle with it without a reaction happening and everything is annihilated (and probably the resulting energy would vaporize the entire neighborhood). Strong magnetic fields are used for minuscule amounts today. The process, of course, has been developed, and given the undeniable advantages in terms of energy production, it will certainly be a technology that will be highly developed in the coming decades.

Star Trek, thus, is the possible future if we decide to use a little logic. In 1966, our current cell phones and tablets would surely look like fiction, just like computers that fit in a backpack. We already have wearable communication and information devices, medicine and its advanced genetic research are on the way to solving serious health problems, and the Federation's database is evidently an anticipation of the Internet.

The scientific and technological advances inspired by our beloved science fiction franchises have been staggering, and have taken place at an ever-increasing pace in recent years. Gender, thus, continues to point the way to the possible future, and it remains for us to hope and demand that advances in ethics and the defense of individual freedoms go hand in hand with the development of science and technology. Also in this, our dear films and series alert us, and if you are a real fan, no doubt you also understand that you must defend these values.

Renato Azevedo is an engineer and writer. Learn more about it in the links below:

From Roswell to Varginha (Editorial Stripe), and Daughters of the Stars (smack)

The Empire, the Meteor and the War of the Worlds

Grandma Nena and the Hunters: The Blue Beetle

Pride Cup 2021 will be aimed at the LGBTQIAP + community and sponsored by Predator and ...

11 destinations to plan a geek trip