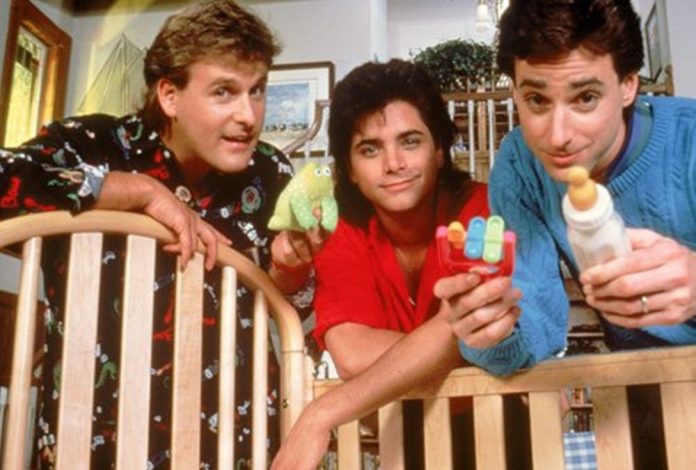 One of the sitcons most acclaimed in history is nearing its end. Yes, Full House, known in Brazil as Three is too much, is about to end! The most unsuspecting can imagine that I am writing this 24 years late, since the original series ended in 1995. However for you who still don't know - for whatever reason - in 2016, the Warner and Netflix created a continuation for the story telling the adult life of the sisters Turner (except Michelle) and neighbor Kimmy Gibbler, receiving the name of Fuller House.

The original series premiered on September 22, 1987 and ran for 8 seasons. Created by Jeff Franklin, a former teacher and screenwriter from sitcons, the original idea involved a house of comedians from Stand Up comedy, and it would be called House of comics. In this series, the main actors would actually be comedians.

There were several changes in relation to the original ideas, after changing the premise and synopsis, there were still changes in the cast. John Posey was hired for the role of Danny Tanner, but was replaced after the first episode by Bob Saget. Already John Stamos had a less drastic change. When he closed the role, his character would be called Adam Cochran. Before recording began, his name changed to Jesse, and the actor asked that his surname reflect his Greek heritage, Katsopolis.

The series takes place in San Francisco, and the Turners' house is located at 1709 Broderick Street, and of course, the address ends up attracting several tourists and fans to the place. However, it is worth mentioning that the series was recorded in California, at Warner studios, the same one in which the Wonder Woman (1975-1979), and later the acclaimed Friends.

Full House arrived in Brazil by Rede Globo, where it started airing from 1980 until the early 90's. Episodes from the 1st and 2nd season were shown on the station. From 2000 the SBT started showing the series, with episodes from the 3rd to the 6th season, and so it was until 2006 when it gave space to the also famous among fans Me, the mistress and the children in the station's grid.

This period was fundamental to popularize the series in the country with the generation that started there, and did not have the opportunity to follow the first exhibitions. Her success on national soil was so great that Silvio Santos' broadcaster showed it again in an interval from 2013 to 2014. Tio Jesse and cia were also broadcast on Warner Channel, in subtitled version, and on September 7, 2015, it was shown again in celebration of the channel's 20 years.

Full house had a cast of names from the Stand Up (As the original idea predicted) as Bob Saget and Dave Coulier. The second already had a name also in Mainstream works as a voice actor in the curriculum. Dave voiced the animated series of Ghostbusters, Muppets Babies and The Jetsons. John Stamos joined the cast after participating in General Hospital. Your romantic couple on the show, Lori Loughlin had already participated in several films and series before joining the cast.

Lori and John's romantic interest was not just between Jesse and Becky. The couple came out off the set, and the actress recalled the case in an interview before the release of Fuller House.

Lori said that she and John went to Disney together, and that they 'fought internally' to see if it was a date or just a walk between friends. "I remember asking him, 'Is this a date?', And he said, 'Yes!'", Commented the actress.

Stamos continued: “If I remember correctly, we ended up kissing… so it was a date,” said the actor.

In addition the cast had then child actresses Candance Cameron, Jodie Sweetin and the Olsen twins, the best known among the actresses who played the Turnners sisters, and Andrea Barber, who gave life to Kimmy Gibbler, the family's hilarious neighbor. The cast still had a peculiar name, Air Bud, the Comet dog, family pet.

Dash & Lily's Book of Dares (2010) which in Brazil received the title of Dash & Lily's Challenge Notebook was written by David Levithan and Rachel Cohn, brings a story that takes place all over Christmas Eve and Christmas / New Year set in New York.
read more
Reviews

It is a production that addresses how female genius is shaped and developed. That's why fiction is so important, because it inspires change. The series may have an old context, but the plots covered are as current as at that time. Whether that was the purpose or not, we don't know, but we suspect. Well produced and with few, almost nonexistent, slipped, the plot of seven episodes of approximately 60 minutes, O Gambito da Rainha is fun, mysterious, inspiring and relevant to the subjects dealt with.
read more

Brasil de Imigrantes | A backstage view of entrepreneurship in the ...