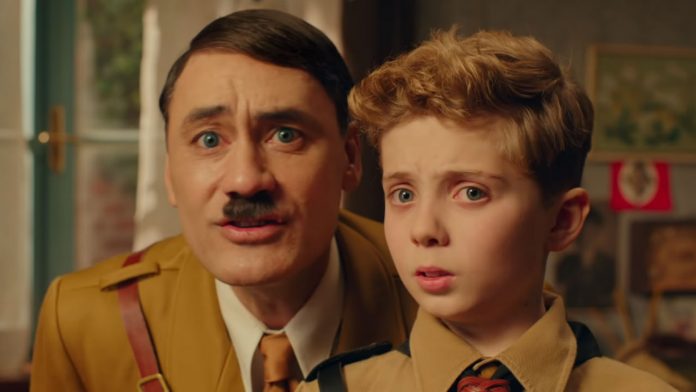 Jojo Rabbit (Taika Waititi) is a dramatic comedy released in late 2019 that deals with the context of World War II, focusing on the story of a German Nazi boy who wants to be part of the Hitler Youth, but discovers that his mother is hiding a Jewish girl in the basement of your home. American production was nominated for six Oscar 2020 categories: best film, best supporting actress, best adapted script, best costume design, best art direction and best editing.

Because it is a narrative that tries to present a different point of view to Nazi Germany, portraying events that were in fact in history, the film can be used for learning purposes, however, with reservations. According to the advisors of History, Philosophy and Sociology of the Positive Teaching System, Adriana Ralejo and Daniela Silva, History is a science that, based on its theoretical and methodological interpretations, allows different narratives from the same period, with which, they comment some outstanding features in the film, which should be viewed with greater attention or can be used well:

In the work, there are some incompatibilities with the period portrayed. “The film starts with images of the Hitler Youth, however, the background music used (I wanna hold you hand - Beatles, 1964) comes from a period later than that portrayed and valued by American youth more than the German ”, explains Adriana Ralejo. For the historian, it is necessary to analyze the intentions and effects that this combination causes, “how to confuse the realities of American youth with Germanic ones, causing what we call historical anachronism”.

“In addition, one of the most recurring mistakes - from a teaching point of view - in this type of production is the use of the English language as universal; would the Germans speak English? ”she asks, pointing out that this happens in different cinematographic productions produced by Americans and that portray different cultures. These examples, according to the professor, contradict a society that is built under the ideology of the hegemony of Nazi culture, known as a fanatical nationalist.

One of the dangers of using comedy to represent historical facts is the romanticization of history. “By portraying Hitler as an imaginary and cartoonish character, authoritarianism takes on an understated facet present in German youth, representing the training process for the armed forces as a moment of pleasure and fun”, he warns Daniela Silva, remembering that it is not because of the dangers of using the humorous genre that its narrative possibilities should be excluded. “An example of the well-balanced use of humor, while transmitting its warning message to authoritarian regimes, is the film Life is beautiful (1997), which portrays the concentration camps in Italy marked by comedy, but awakening the reflection on terror and violence in this scenario ”, he comments.

The representation of youth education in the film demonstrates the valorization of military training and the cult of Hitler's personality, which was an inspiration to be followed to reach positions of power in German society at the time. “In this model of education, the culture considered degenerate - Jewish - is the target of destruction, represented mainly by the scene of the burning of books”, exposes Daniela. This incentive to only Nazi culture is reinforced at various points in the feature film, including the use of Nazi propaganda.

“The demonized construction of the Jews as a threat to the Aryan race is represented by the book made by the main character, using art as a means of legitimizing violence against Jews”, highlights Adriana. In contrast, the film shows a dialogue between the German and the Jew, which questions this hegemonic cultural look, presenting the intellectual productions of the Jews. For the teacher, “in this perspective, it is possible to think through the documentary bias Architecture of Destruction (1989), which presents the destructions carried out by the Nazis regarding knowledge that was not German in essence. In this way, we believe that more than one historical narrative is present in the film, casting the different perspectives that scientific practice provides ”.

The comedy made it possible for other narratives to appear in a broader way, being possible to mention the issue of gender, homosexuality within the armed forces, the physical standard worshiped by the army and the consequent marginalization of those who did not fit the established parameters. “The figure of the woman is initially portrayed by the patriarchal gaze, with her social functions reduced to the generation of soldiers for the nation and her role in the war focused on the field of nursing. On the other hand, the character Rosie presents female empowerment by taking over family management in the absence of the male figure and being a personification of resistance to Nazi society ”, stresses Daniela.

Was it possible to oppose the Nazi system at the center of that society? According to Adriana, yes, there were resistances and the film portrays forms of this resistance within German society itself, "pointing out Germans who show themselves human in the face of symbolic and physical violence against Jews, as is the case with the main character's own mother". The teacher also recalls that this fact refers to episodes explored within the teaching of history, such as the case of Anne Frank. "However, it is worth noting that resistance is not only seen in its beauty, but the consequences are also presented to those who oppose this system, such as hangings in a public square", he stresses.

In addition to these points, it is possible to mention other historical facts present in the film, such as the collection of donations for war funds; the investigative work of Gestapo; Hitler's suicide and the victory of the Allied forces - all themes that parents and teachers can explore when presenting the cinematographic work to teenagers and young people. It is also important to note that the indicative rating of the film is 14 years.

Comparative film vs book: Murder on the Orient Express

See all the moments that 'Birds of Prey' made reference ...