Thunder Wave
StartSeriesNewsMark Hamill debuts on HISTORY as the master of the Knights Templar, in ...

Mark Hamill debuts on HISTORY as the master of the Knights Templar, in the second season of Knightfall 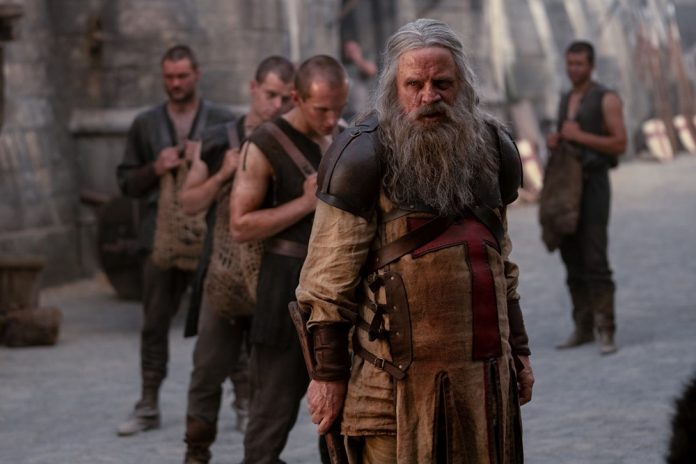 After a long break, the popular drama series Knightfall returns to HISTORY, starting on May 30th. In this new season, the famous actor Mark Hamill (Star Wars) exchanges his lightsaber for a medieval sword, and joins the cast. His character, Talus, is a veteran Templar Knight, enmeshed in the battle of the Crusades, surviving a ten-year captivity in the Holy Land, and who now has the task of training new initiates in the Order.

“Talus arrives… and the bloodbath begins. Unlike any character I've played, ”wrote Mark Hamill on his Twitter account.

Knightfall begins with a defeated Landry, played by Tom Cullen (Downton Abbey, Gunpowder), without his title of Master of the Temple and sentenced to exile for having betrayed the brotherhood. Meanwhile, the King of France, Philip IV, declared war on the Templars, initiating a bloody struggle, marked by revenge and the dispute for the coveted Holy Grail. Landry will fight to achieve his redemption and be reincorporated into the brotherhood, but he has to return to training on the way of the Templars, and the responsible for this will be the master Talus. Without forgetting that Landry is a stubborn monk, and that he betrayed his values by becoming Queen Joan's lover and making her pregnant.

“I am not the antagonist, but I know that I will make things difficult for Landry. And I believe there is a reason for that, it is because he wants Landry to succeed, ”commented Mark Hamill of his character Talus.

With the historic fall of the powerful Christian military order on the horizon, the second season focuses on themes such as power, redemption, revenge, betrayal, family and, ultimately, an epic war between the Church and the State.

“We are very pleased to announce the debut, exclusively for Latin America, of the expected second season of Knightfall, a series performed in an extraordinary way and with a cast of first level. This is an original drama from HISTORY which, through fascinating characters and a vibrant plot, returns to tell the story of the Knights Templar in a captivating, epic and emotional way ”, comments Miguel Brailovsky, Senior Vice President of Content at HISTORY América Latina.

Through the Templar perspective, Knightfall it encompasses the most brutal and obscure medieval period, addressing the politics of the time and the war of the most powerful, rich and mysterious military order of the Middle Ages, and delving into the clandestine world of the legendary brotherhood, the so-called warrior monks. The first season ended in a dramatic episode, in which King Felipe IV tries to kill his pregnant wife, Queen Joan, while she asked her lover Landry to save her. The Grail managed to keep the child alive with its womb, which was born thanks to a caesarean section, but Joana did not survive. In an attack of anger, Landry throws the holy relic and it breaks into pieces. However, it is speculated that the Holy Grail might not be the real one, since when Master Templar Berenger examined the shattered cup, he discovered a paper with a list of names, including Landry's, which he soon tried to swallow. This created a new mystery about the cup in which Jesus had drunk.

Now, in the second season of Knightfall, the question is whether the broken Grail was the real thing and who will take the relic: the Knights Templar or the villainous King Felipe? In the new eight episodes, fans can expect the conflict between King Felipe and Landry to continue, as the King of France will try to get the Grail at all costs, while Landry will do everything possible to prevent the relic from reaching its hands.

In addition to Mark Hamlil, the cast wins the reinforcement of Tom Forbes (The Bastard Executioner, Wolf Hall and Been So Long) like Prince Luís, the violent and unpredictable son of King Felipe and heir to the throne; Genevieve Gaunt (The Royals) like Isabel, the king's daughter, who went down in history as “the wolf of France”; and Clementine Nicholson (Underworld: Blood Wars), as Margarita, princess of Burgundy and prince Louis' faithful wife. Ed Stoppard returns for this second season (The Crown) like Rey Felipe IV of France; Pádraic Delaney (Winds of Freedom, The Tudors) as Gawain; Simon Merrells (Spartacus, Dominion) as Tancrede; Julian Ovenden (Downton Abbey) such as William DeNogaret and Jim Carter (Downton Abbey) in the role of Pope Boniface VIII.

Friends | Special episode bringing the cast together can finally happen

The cinemas that will show 'The Day Of The Doctor' confirmed