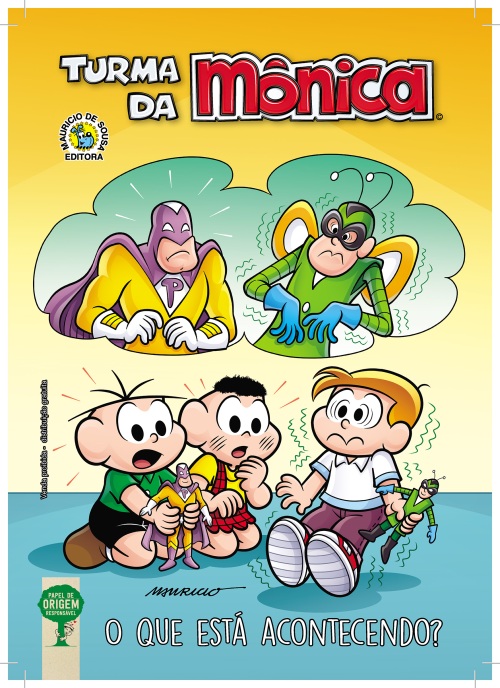 The Genom, the medical prescription business unit of União Química Farmacêutica, launches, in partnership with Mauricio de Sousa Produções, a special magazine by Turma da Mônica on epilepsy. With the title "What is Happening", the magazine tells the story of the character Haroldo, with epilepsy. “The goal is to destigmatize the disease and also give tips on how to proceed when faced with a person in a convulsive crisis”, says the Executive Director of Genom, Vagner Nogueira.

Haroldo is a new character created especially to address the theme. He is a seven-year-old boy who has epilepsy and suffers from the seizures that this disorder causes. He dreams of becoming a doctor like his mother, his best friend, who helps him overcome the challenges that every epileptic faces, among them, that of making new friends who treat him naturally, without fear or discrimination. The plot shows Cebolinha and Cascão playing with Haroldo. When he suffers a seizure, his mother enters the story explaining, in a didactic and playful way, what the disease is and what to do in these cases.

The magazines are being delivered by União Química to neurologists from all over the country, to be distributed to patients and their families. “Our idea is to expand the dissemination of the subject, since the project aims to offer a service to families and neurologists,” explains Marketing Director of União Química, Cristina Poloniato. “Correct information is the first medicine that everyone needs to care for people who suffer from epilepsy. We created the character Haroldo who, together with the group, will take this information to schools and entities in the area so that we can look at this theme with love and affection ”, emphasizes Mauricio de Sousa.

Epilepsy is a neurological disease characterized by excessive and recurrent electrical discharges. The incidence is 50 million people worldwide. In Brazil, there are about eight cases for every thousand inhabitants. The World Health Organization estimates that there are three million epileptics in the country. In most cases, the cause of the disease is unknown. Despite having no cure, with the monitoring of the neurologist, 70% of the patients are able to control the disease with appropriate medications.

The scientific content of the publication was validated by the child neurologist Leticia Pereira de Brito Sampaio. Those interested can purchase copies of the magazine, free of charge, through the Union Chemicals Customer Service (SAC), by phone: 0800 11 15 59.

Cebolinha - Recuperação is the new edition of the Graphic MSP seal