To make Avengers fans even more excited, Panini launches The Thanos saga, what presents the life of the most feared villain in the Marvel universe ... and his first death too. Divided into two editions with a luxury finish, in hardcover and with more than 400 pages, volume 1 will be released next Thursday, April 25, the date on which the film Avengers: Endgame also reaches Brazilian cinemas.

There are 448 pages full of details about Thanos, which show how the character was already a dangerous force to be considered, even before trying to exterminate half of the Universe. In the new comic book, fans of the Marvel universe will be able to follow great facts, such as the creation of Warlock, his battle to free Contraterra, Thanos' search for the Cosmic Cube and his machinations against Captain Marvel. In addition, the HQ has the presence of other great superheroes such as Thor, Iron Man, Fantastic Four, Hulk and Drax.

Written by Stan Lee and other renowned authors from the comic book universe, the title The Thanos Saga will have two volumes, with the first edition already available in pre-sale at lojapanini.com.br. 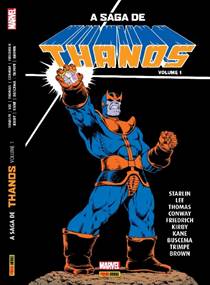 Panini is present for the first time at Brasil Game Show

With Brazilian art, Magic: The Gathering launches Secret Lair in ...

February 24, 2021 0
Exclusive collectible deck of the United States market has seven cards made by black illustrators, such as Recife's Ernanda Souza, responsible for "Shalai, Voice of Plenty".

Netflix announces the purchase of Millarworld, the comic book publisher of ...

Graphic Novel 'The Last Arrow' explores the theme of violence against peoples ...