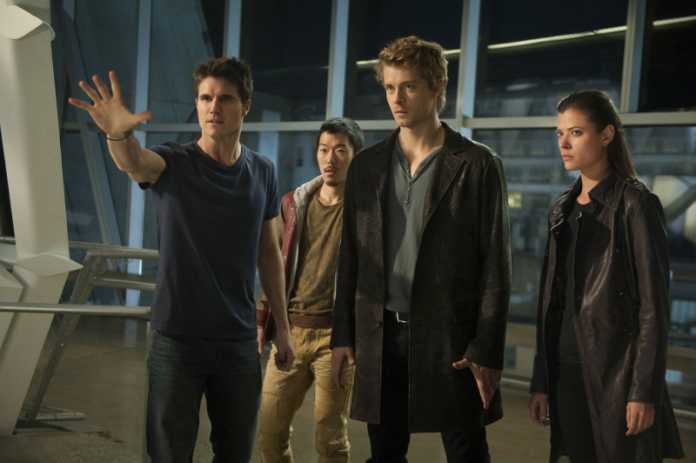 The Tomorrow People is the channel's new sci-fi series CW.

When Stephen Jameson (Robbie Amell) starts to hear voices and wake up in strange places, he starts to question his sanity. Enlist the help of your friend Astrid (Madeleine Mantrok) Stephen is desperate when he hears the voice of Face (Peyton List) and decides to pay attention to that voice. It ends up contacting it, with John (Luke Mitchel) and Russell (Aaron Yoo), who are the main members of the so-called “Tomorrow People” (remember Alphas, X-Men, Heroes?) and are an evolution of the human race. They have powers of telekinesis, telepathy and teleportation. There, Stephen learns that people like them are being pursued by a group of scientists led by Dr. Jedikiah Price (Mark Pelegrino), entitled “ULTRA”, as they are considered dangerous for the population. In the end, Stephen discovers that he has several powers as well and that his father's mysterious disappearance (Jeffrey Pierce) may mean that he is still alive. Another surprise awaits him and he has to make his own decisions upon receiving Jedikiah's proposal to help them eradicate friends, in exchange for the welfare of his family, mother and brother.

The series is a remake of a 1973 British production. It features the production of Greg Berlanti, and Julie Plec, with script Phil Klemmer.

The protagonist, Robbie Amell, is a cousin of Stephen Amell, protagonist of Arrow, which we can see in the enormous similarity between the two.

The pilot was well developed, introduced the characters and explained this “difference” between them and the rest of the humans and made it clear the path he intends to follow, with the presentation of ULTRA and the mystery involving Stephen's family. It had an air of mystery, leaving you in curiosity to see the next ones and see the revelations of the subjects covered in this pilot. The special effects also left something to be desired. Everything leads us to believe that the series must, the original of 1973, have been the precursor of other series like Heroes and Alphas or films with genetic mutations in general, addressing the theme of an evolving race that, as always, disturbs the owners of the law, having to take refuge. There was a good interpretation of the actors, and of course, we have the excellent interpretation of Mark Pelegrino, again villain as in Lost and Supernatural. The series was seen as promising and full of entertainment by viewers, especially those who like “Arrow” style series. .

Have you seen it? So ... Should Stephen be trusted?

11 destinations to plan a geek trip