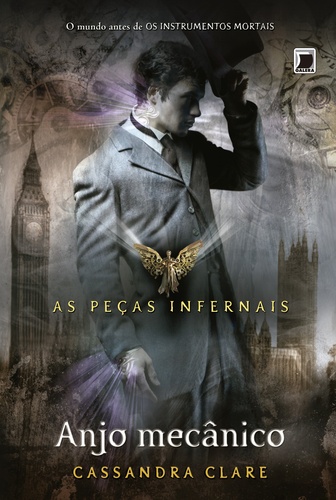 Recently the Netflix finished the series Shadow Hunters which is based on the saga of books The mortal instruments from the writer Cassandra Claire. In addition to this world created by the author, it was also written The infernal pieces, a trilogy that will take place around 1880 with the ancestors of the Shadow Hunters series. However, one story is not involved in the other, it is possible to read The infernal pieces without knowing The mortal instruments, both are independent.

The narrative begins when Teresa Gray, better known as Tessa, is moving to London. The girl's aunt, who was her only guardian, has just died and that's why Tessa is going to live with her brother Nathaniel Gray. However, when she arrives at the airport it is not her brother who receives her, but two ladies who claim to be doing Nathaniel a favor by picking up Tessa. Since it is a period book, it is possible to notice from the beginning of reading the writer's concern with describing places and clothes very well.

However, the two women end up revealing themselves and kidnapping the girl for two months and over that time they teach Tessa how to use some powers that she didn't even know she had. The kidnappers threaten Tessa, claiming to have kidnapped Nathaniel as well. Thinking about her brother, the girl does everything the women say and ends up discovering that she has the power to physically transform herself into someone as long as she touches an object that has already belonged to the person.

In these first pages, everything happens very fast, especially when shadowhunters enter the story. At the same time that Tessa is in prison, there are some murders in London and the shadow hunters are investigating, trying to find out who is responsible for the deaths. A little further on it is said that these hunters are actually like soldiers responsible for defending humans from creatures of the underworld like demons, vampires, fairies, sorcerers and all supernatural beings.

The writer created a whole world of supernatural beings that is explained and developed throughout the narrative. Furthermore, with the dialogues, we can see how well the characters are built, each one has their own personality and sometimes it was not even necessary to see whose speech it was, because just seeing how it was said, it is already possible to find out which character would say that phrase .

During this investigation the hunters find Tessa and rescue her. Teresa ends up making a deal with the shadow hunters, she would use her powers to help find the killer as long as they help her find her brother. With that, they begin the search for answers.

The book has a little romance, fantasy, humor and a lot of action. The plot has several twists and surprises throughout history. The writer's language is fluid. It is worth giving this reading a chance.