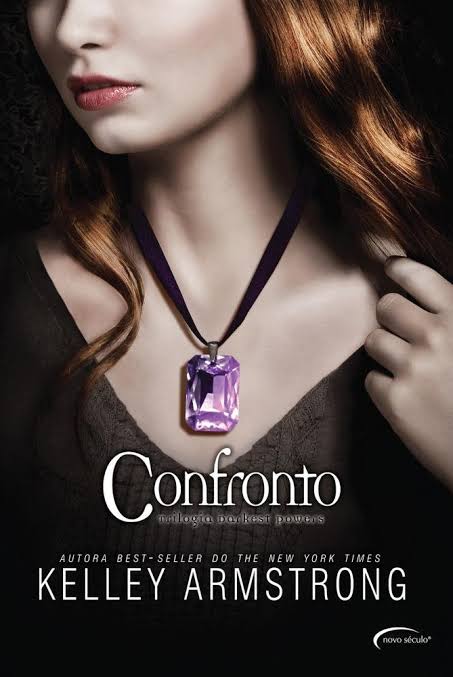 Confrontation is the third and final book of the trilogy Darkest Powers, which shows us well-developed characters, interesting dialogues and a very good explanation of all the mythology surrounding the narrative.

Following the last scene of Awakening, the second in the trilogy, Chloe, Simon, Tori and Derek they are with Andrew, friend of the boys' family, who helps them escape from the group Edison. Finally safe, Chloe feels momentary relief after so long on the run to ensure her survival, but can't stop thinking about her aunt Lauren is at Rae, her gifted friend who remained in the hospital.

Teenagers also discover that Andrew is part of a resistance group that
does not agree with some actions of the Edison group. However, for members of the
resistance help Chloe rescue Lauren and Rae, she needs to convince them that the Edison group is actually genetically modifying the children and in the worst case they even murder them.

Throughout the narrative we had romance in small doses. It is possible that the writer
always try to bring Chloe's love relationship into the background so as not to take the
main plot focus. However, this book has explored further about the love life of
Chloe to also find out what she felt for Simon and Derek, because even the work
being written in the first person, we are not sure who is chosen. The decision scene was very interesting and we can finally know who this young necromancer's heart is in love with.

However, there is not only romance in this reading, because among all of the trilogy, Confrontation this is what happens most action scenes, mainly because it is the outcome. In addition, for Chloe, who is only 15 years old and raised in excellent financial condition, she has managed to adapt very well to the difficulties of always running away. Not to mention that Kelley Armstrong he achieved an exceptional development for the protagonist, since, in dangerous moments, even if his power is not specific to fight, she manages to make good use of it.

Chloe's power is much more explored, there are many explanations around necromancy and there are several scenes built on how far the young woman's power can go, which makes us wonder a lot about how powerful she can be when she grows up.

The character Derek evolved a lot too, he became more patient and tried to be
less coarse. In addition, we can learn more about all the mythology that involves werewolves from Derek, much about the transformation and its strength are explained and during these scenes there were some comedic moments that make reading lighter and more pleasurable. Not to mention that we can learn more about the powers of the other gifted.

Finally, teenagers who do everything they can to make Andrew and his allies fight against
Edison group, but there is no guarantee that the young people will have help to carry out the rescue. Beyond
of this, they are being chased, Derek feels it, but he has no idea who it is or why. And in the midst of it all they do not lose hope of finding Simon and Derek's father who may be the best help they need.

The unfolding to the end of the plot is quite interesting. After the climax and outcome of
narrative, the writer chose to leave the story open as if we could imagine
what their lives would be like after that last chapter, which makes them want to read more. It was well worth the read.

Review | The Awakening of the Prince- Colleen Houck