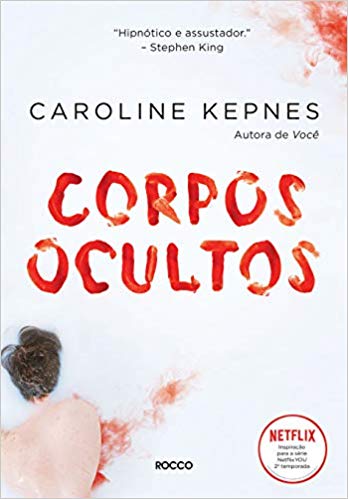 Caroline Knepnes presented Joe Goldberg for readers in your work You, which even served as an inspiration for homonymous series of Netflix. In his new work, Hidden Bodies, which also serves as inspiration for the second season of the aforementioned series, we follow the protagonist again, who returns with more obsessions and with the weight of the acts committed in the previous book.

*** Attention, may contain spoilers of the first volume below ***

After killing Beck, Joe returns to his normal life working at the bookstore, where he quickly meets Amy Adams, who occupies the vacancy left by Beck- in the bookstore and in the relationship with the protagonist. Joe is in love with Amy and likes her particularly for not being able to chase her on social media, since she is a person offline. The girl has no social media account, bank account and uses only a disposable prepaid cell phone. All this when presented, quickly makes the reader suspicious, less the blind passionate Joe, who even though he does not suspect these attitudes, still takes the opportunity to look at text messages and what he can achieve from the girl's life, occasionally.

When the girl hits Joe, he is consumed with anger and goes after her in his new home in Los Angeles to kill her. He changes his life, leaves everything behind and takes over in this new city, tirelessly looking for the girl and even killing whoever gets in his way. Until he meets a person who promises, finally, to get this obsession out of his mind. However, his past haunts him and the risk of having his crimes revealed is constantly haunting him.

In You, Kepnes showed a great talent for narrating Joe's twisted personality, exploring his obsessive side very well and how dangerous a stalked innocent can become to someone who has a large abandonment complex. With everything he did in the previous work, the character ends up becoming even more inconsequential and murder becomes something common for him. Her disorders only grow and with them, the author's narrative, which seems to be able to go even deeper into the protagonist's psyche in this volume.

Joe's personality peaks - where a moment is narrated as perfect by him, until a minimal detail "spoils everything" and turns the occasion into a tragedy -, increase in this work, further justifying his unthinkable acts. This time in Joe it becomes even more evident, since in the first volume much of Beck and his disturbances were explored.

In Hidden Bodies, we still have several problematic characters being presented throughout the plot, but they are transitory and end up leaving the main focus only on Joe, becoming what the title itself indicates, bodies hidden wherever he goes.

The author manages to grow her character in this book, not only by deepening her psychological analysis, but by giving him a new path, which changes events dramatically at a certain point and still leaves an end with a huge hook for the next work, since they exist at at least two more announced on the way.

In this saga, Kepnes manages to arrest more and more, showing his talent to analyze human psychology and bringing questions that promise to leave the reader absorbed in a deep self-analysis.

Review | Pancadaria: Inside the epic Marvel vs DC conflict

Review | The advantages of being invisible