The book The book Thief, in Markus Zusak it's a remarkable read. I read this book about 6 years ago and even today, even forgetting a little of the story, I remember the intensity of what I felt reading it. I believe pretty much everyone who read this book cried like there was no tomorrow at the end of it and that's what fans expected when watching the film adaptation.

However, the feature did not manage to convey the same intensity as the original work. The director Brian Percival he didn't know or didn't want to convey to the screen the despair and sadness that the book goes through, no matter how faithful the story is, it fails to convey the full depth of the weight of the war and its events as in the narrative of Markus Zusak .

This dramatic flaw in the long will only be felt by fans of the book, for those who haven't read it, the film will be perfect. The adaptation deserves praise, even the most annoying with the changes that occur in the film adaptations will have difficulty finding differences in the script and I managed to find the feature film very faithful to the book, representing the events well. It's a film that grips the viewer from beginning to end. 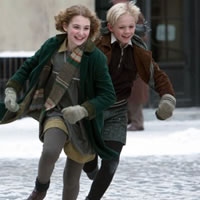 narrated by death (Roger Allam), the plot of The book Thief tells the story of Liesel Meminger (Sophie Nélisse), a young woman who has to go to live with a new family in Germany during World War II, after her mother is accused of communism. After his new father, the kind Hans (Geoffrey Rush), teaching her to read, she becomes passionate about books and ends up developing the habit of “stealing” works when they are banned and burned. Over time, Liesel develops a very close friendship with Rudy (Nico Liersch) and the jew Max (Ben Schnetzer), who lives clandestinely in his house. As events unfolded, we are introduced to the development of World War II and its consequences.

The cast carries the production on their backs and all the performances, without exception, are great. Little Sophie managed to perfectly convey Liesel's profile and all her innocence that made her look even a bit dumb. Geoffrey Rush impresses with his ability to play a role so far from what we are used to seeing, Hans is a character that captivates you as soon as we know it and Geoffrey has achieved exactly that, magnificently representing the dear Hans. Emily Watson, that makes pink, Liesel's adoptive mother, also delivered her character perfectly, showing all that cold side of the character, who is a bit bitter but who loves Liesel and Hans a lot. 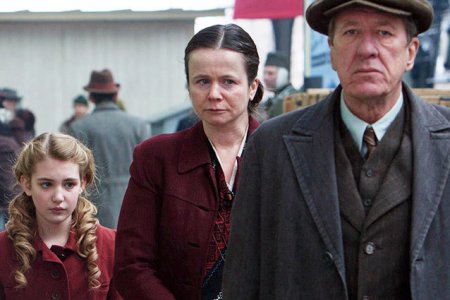 the soundtrack of John Williams, which received an Oscar nomination, justifies its nomination, even though it didn't stand out much in the film, it was well chosen. The photography and the sets were very faithful to what was proposed in the book, with an environment that represents the simplicity in which they lived at the time, an environment that is very grey, which highlights the depressing representation of the time.

The book Thief promises to please fans of the book who do not care about the "smoothed down in the drama" and especially those who have not read the book, because it shows the story very well without leaving any loose ends.

The feature based on the best seller “The art of running in the rain” by Garth Stein, which tells the story of a friendship ...

Review | voices from the past

Brawlhalla gets another Street Fighter crossover

Caetano O'Maihlan launches an interpretation course on the Chubbuck technique

read more
A faithful adaptation of the book, A Menina que Robava Livro manages to please readers and non-readers of the original work, even without bringing the same dramatic charge. TaranisReview: The Girl Who Stole Books
© Copyright Thunder Wave 2012-2021 • All images of films, series and etc. are registered trademarks of their respective owners.
Posting...

Review | The Curse of the Mirror

Review: In the Heart of the Sea

Review: The Watchman of Tomorrow- Ghost in the shell