I could end the review of this masterpiece with just the words of John Green, but I insist on saying a few words. Please, if you’ll excuse me, I’d like to review about Eleanor & Park, in Rainbow Rowell.

Well, it all started when I went to buy a certain book, I didn't have it and I didn't want to leave the bookshop empty-handed - I already had nothing new to read. It was when, suddenly, I remembered that book, without indications from friends, I took it home. At first, I leafed through a few pages and it was class time, which made me take a while to read it. But on my bus journeys, I put it in my backpack and had the pleasure, I repeat: I HAD THE PLEASURE TO DEFOLIATE IT.

You know that book you take and taste it without haste, without thinking of returning it to the library or to the friend who lent it? This book is one of those, to read each line quietly and to get it into your heart. It is as if Rainbow transported you to the story and with each story by the author, you observe the scenes very closely.

“We think that hugging someone tightly will bring them closer. We think that if we hug it too tightly, we will feel it, embedded in us, when we are far away. ”

The plot begins in August 1986 and tells the story of Park Sheridan and Eleanor Douglas, two sixteen-year-old teenagers who live in Omaha, Nebraska. Park is of Korean descent, from a structured family and is passionate about music and comics. He is not exactly the most popular guy at school, but he is still a target for everyone. Eleanor, on the other hand, is the type of girl who is not well regarded by schoolmates - literally speaking, she suffers bullying kind of constantly; she is a redhead, has her own style (in fact, she dresses in some very strange clothes) and calls herself “fat”.

Until you have real contact, it takes a few chapters, but the reading is so good that you don't see the delay and it is done as something natural. The first contact between Park and Eleanor is on the school bus, where Park is reading some comics and Eleanor gives that peek out of the corner of her eye. The two get closer, thanks to the exchange of songs and comic books - insistently done by Park, and a romance begins to develop. Teenager stuff, you know? But the story, dear readers, is not at all adolescent.

The big difference in this book is that within each chapter (always named ELEANOR and PARK), there are sub-chapters also with the same names and in such a way that the central characters are the narrators themselves - kind of the owners of their own destinies. The plot is intriguing, engaging and of good musical taste of the characters (from the author, go!). Each unfolding of the story is a laugh and you feel like love is something renewable in the best teenage style of being.

The great thing about all this is that the DreamWorks bought the right to shoot the book and soon, we will have Eleanor & Park, The Movie. Not much is known about casting choice, filming locations, direction and production staff. What we do know is that the author will write the script and that sounds good to the ears of fans, especially in terms of “differences between films versus books”. 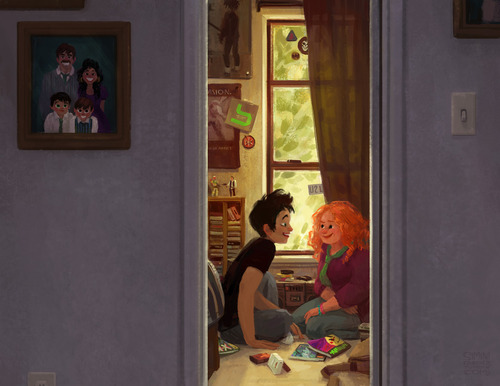 In short, Rainbow entered the hall of life's best authors, and it's not because she became bestseller of The New York Times… If it's worth a tip, read and be moved by this incredible book and keep it close to your bed, you'll always come back to it when you can. Few books made me cry, “Eleanor & Park”Was one of them.