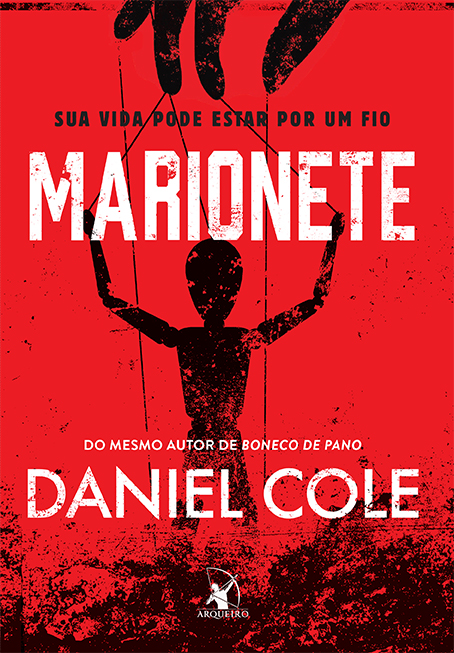 Second book in the Fawkes and Baxter trilogy, Puppet is a continuation of Daniel Cole's debut novel, Cloth Doll.

Focused on Emily Baxter, who still deals with scars from the Cloth Doll case, the plot presents a new wave of crimes. After Fakes' disappearance, Emily is reluctant to help with the new investigation, but the similarity with previous victims ends up forcing her to get involved. This time, the victims are found, usually in pairs, in positions similar to hanging puppets and the words "Bait" and "Marionette" engraved on each one's chest.

-> See the review of Cloth Doll

Even if it is a continuation, Puppet it also works as an isolated work. The events precede those of the previous book, and put some references that work more in the psychological construction of the characters than in the functioning of the facts, being possible to read without knowing the previous one and to understand everything, only with the use of the explanations given throughout history.

Daniel Cole employs the same creativity in the plot of this book, in each new crime scene he manages to shock the presentation. While developing the investigation, small tests allow the reader to follow and try to unravel the case together, which only grows in interest and becomes more and more intriguing.

When he wrote Boneco de Pano, Cole did it as a television series pilot, which later became a literary work. For this reason, the narrative is very visual and happens through dialogues, making it clear that it would work very well on screens, but impairs reading a little, making it less exciting due to the format chosen for writing. The same narrative is used in Marionette, who ends up suffering from the same problem.

Even with the slower reading because of this choice, both books have an interesting history, where the originality used in the execution of the crimes, the richness of details and the captivating characters manage to stand out under the unusual narrative, well compensating for their reading.

With a greater focus on the former supporting role and some accurate intrigues, Puppet it is yet another interesting investigative book, which travels through Cole's creative - and disturbed - mind.

Review: The Sun is also a Star- Nicola Yoon