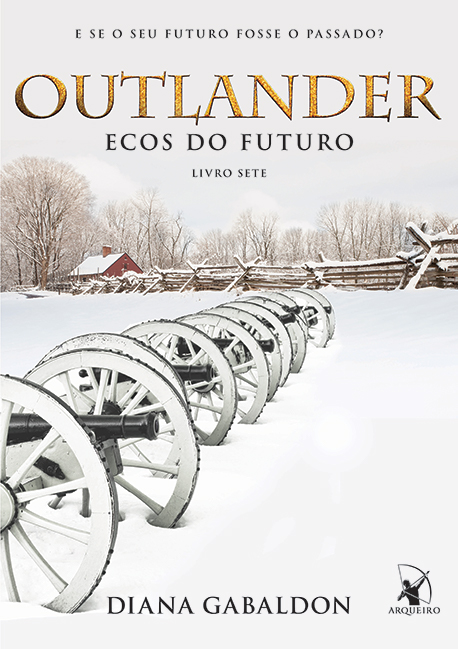 The seventh book in the series Outlander, Echoes of the Future has just been released by Arqueiro publishing house, continuing Jamie and Claire's journey.

But unlike previous editions, now besides the protagonist couple, we have three more plots that take place in this story.

The new adventure goes beyond the seas, reaching America, in a troubled time that is the American Revolution, where we follow the journey of William Ransom, the adopted son of Lord John Gray. Meanwhile, the author finally gives us a story of her own and full of dramas with Jamie's nephew, Ian Murray. To top it off, Brianna and Roger try to adapt to life in the 20th century.

This is a dark book, as its cover shows, especially with the harsh winter, with Ian being confronted with the events of the previous book. Ian's story is intertwined with that of Jamie and Claire and the character becomes so captivating and alive, that a book of his own would undoubtedly be interesting. Still within this narrative, we have Jamie trying to return with his graphics, but as always, nothing is so simple in the life of the Frasers.

Meanwhile, William's trajectory is from comic to dramatic while doing his missions for the British army. The character goes from the naivety of any young man full of dreams to fall into the reality of this revolution, especially when he bumps into another character, who will make readers go crazy with the situation of biting their nails.

And as you can see, Echoes of the Future gives more freedom and space for the new characters. It is the entry of a new generation that lives up to events and so well created, we hardly miss the older ones that we have learned to love so much.

Another interesting point in this book is the way in which Diana Gabaldon used to tell the events lived by Jamie and Claire without having to go too long in the chapters, since the book itself is one of the largest ever written.

Through letters, which Roger and Brianna find from Claire and Jamie, we understand everything that happened in the past, and in this way the author maintains the connection between families that are now distant in more than 200 years. The fascinating thing about all this is to realize that both Jamie and Claire are already dead, but practically alive due to the narrative of the facts. It's like watching a flashback.

The book still has real characters like Benedict Arnold, who was a general during the Revolution and if you do not know him, do not look for information about it so as not to take spoilers, and Benjamin Franklin, who besides being famous for his experiences with electricity, was one of the main names of the American Revolution.

Outlander - Echoes of the Future, keeps his style and grows in his narrative, mixing even more the suspense and the power struggles of fiction with the historical reality of the time, raising all emotion and making readers much more absorbed in this new adventure.