Pretty Little Liars it is a hit with the youth audience, and some adults. The series, from ABC Family in the USA and spent in Brazil in Boomerang, has won thousands of fans over its 6 seasons. But what about books? We do Thunder Wave we read the first 8 books, which were kindly provided by the publisher Rocco, and we came to tell you a little more about the series of books by Sara Shepard. In the future we will post about the other books and a comparison of the series vs books.

In the review we talk about the 2 boxes, which have 4 volumes each. The complete series has 16 books and also has three extras, which must be read at least after the first eight, due to Spoiler.

The central story is about the five beautiful teenagers, all from wealthy families, who live in the same city, Rosewood, and study at the College Rosewood Day. 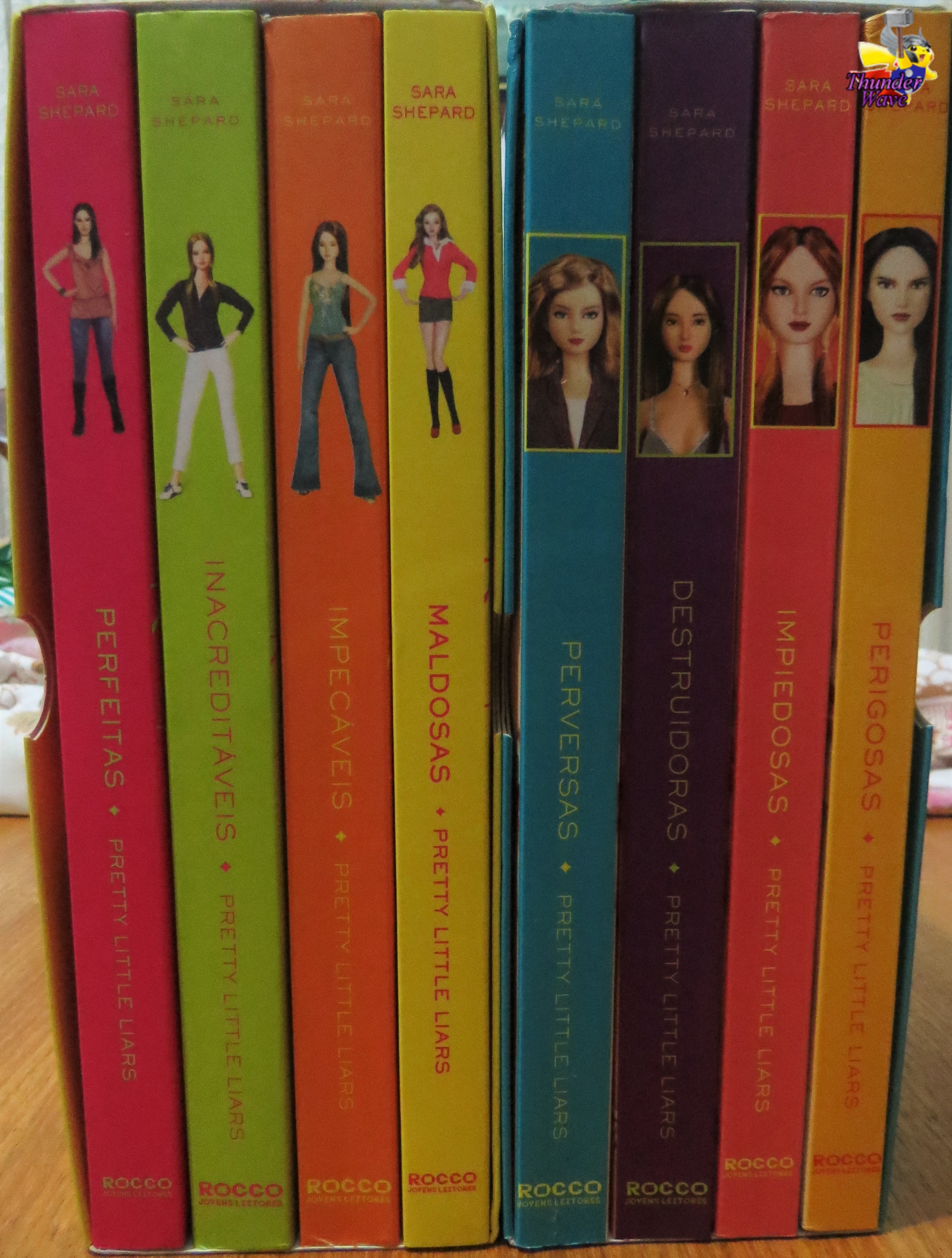 intelligent, competitive and perfectionist, who does not hesitate to use drugs to improve his grades;

Hanna, the girl who always wants to be popular, but who was already overweight, even suffering from bulimia;

Aria, who seems to be the most balanced of all, with a certain artistic approach, and who in the past was called weird, for wearing streaked pink hair;

Emily, the swimmer, but who hesitates to assume who she really is;

And finally, Alison, the most beautiful and popular, with whom boys fall in love and girls aspire to be equal.

Alison was very manipulative and involved the five of them in an event that wound up a student named Jenna, which the five had to hide. She also had a habit of disparaging other girls, making her friends do whatever she wanted.

After Ali's disappearance, the four best friends, full of individual secrets that only Alison knew about, end up being threatened by someone named "A". As the threats arrive, the four are more focused on finding out who is behind the messages, which ends up making them even more neurotic than they already were and even somewhat inconsequential, harming other people with their attitudes. Ironically, while trying to cover up their old secrets, they wind up further and create even worse secrets.

Each volume has a greater focus on one of the characters, we can see that on the cover, and so we get to know a little more about each one of them as events unfold, while we play detective, trying to unravel who the blessed “A” is. 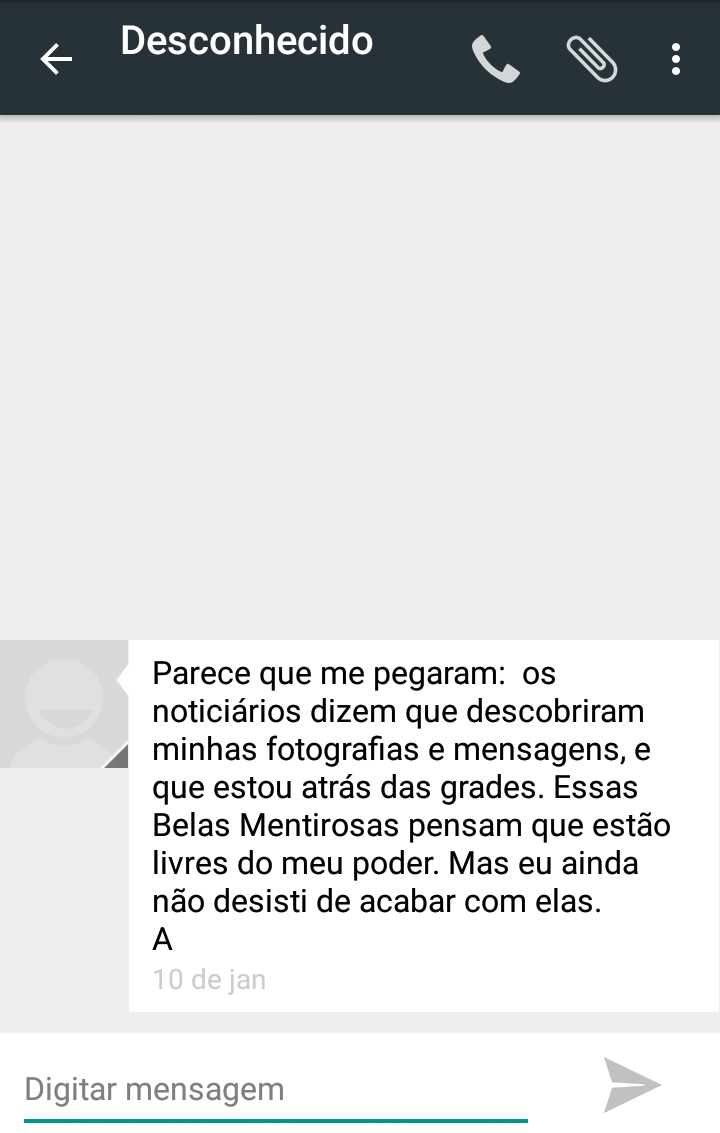 Throughout these eight volumes, we are introduced to new characters, some passengers, others more prominent. Of course, some fatalities happen along the way. But one thing is routine, they always make mistakes when they think they discover the identity of the culprit.

Sara Shepard addresses several subjects with different themes, such as bullying, student drug use, homosexuality, bulimia, infidelity, mental problems, minors with drinks and the dispute for popularity in schools. That is, normal things in a world of rich American teenagers ...

The works have an easy and engaging narrative, even if irritating a little with the extreme stupidity of the little liars, it shows the futile life of all the girls in the city, not just the five friends. The author knows how to report everyone's daily life and piques curiosity, both in the mystery of who “A” is, and in the question of how long they will curl up to cover up a lie. Always having a new subject, with one more mess and a surprise at the end of the current reading.

A single unpleasant point is the repetition of information at the beginning of the books, especially for those who read everything at once, but for those who have read the last time it is even a good reminder.

I must point out that it differs a little from the series, both in the appearance of the girls, because Spencer is blonde, Emily redheaded and Aria the tallest of them. Some characters, who probably captivated the audience, are still alive in the adaptation and not in the book. Others do not appear in the story, appearing as a complement only in the series, but every adaptation has its differences.

What I liked most about this edition of Rocco were the covers, they are beautiful and original. They all represent one of the four on the cover like dolls, which suggestively look like Barbies. and on the back cover as a person. In the first box we see the doll with full body and in the second, a half face that is complete to the human. 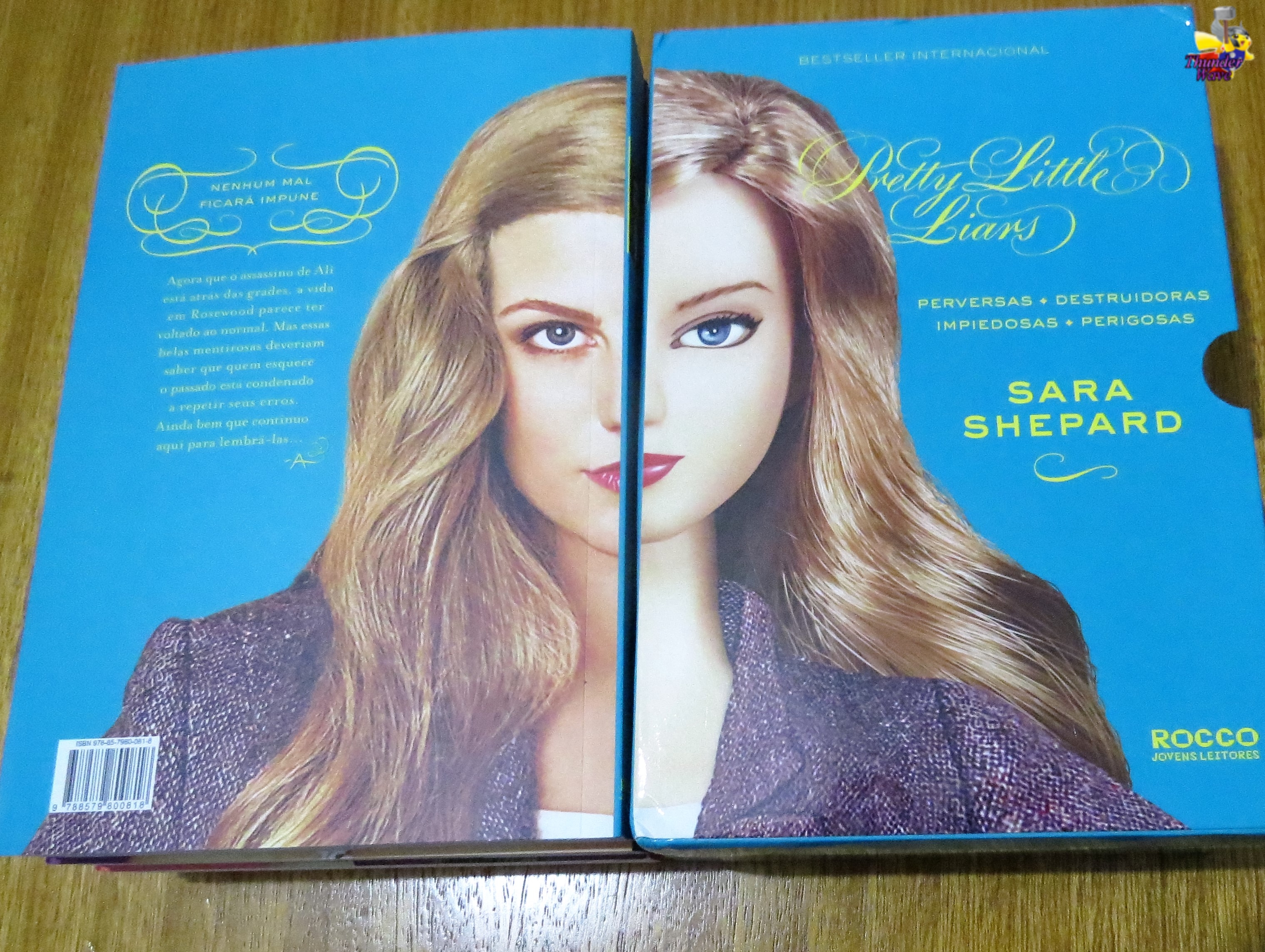 Despite the stupidity of the protagonists being irritating, it was a reading that impressed me, because I ended up liking it more than I expected. The theme ended up not being as youthful as you might have imagined, and the mystery really gets you.

The books are launched in the following order, with three more extras.

0.6– Alison's Pretty Little Diary - (Not yet released in Brazil)

Hidden Bodies, sequel to You, which served as inspiration for the second season of the series, manages to delve even further into the troubled protagonist and leaves a promising future for the character.
read more
Reviews

Between mistakes and successes, you stand out for your psychological analysis and very well presented situations.
read more
News