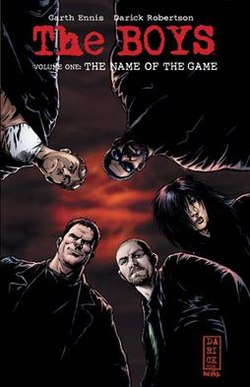 With the debut of adapted series, The Boys it's a comic that has become a subject again. Originally published in 2006 by WildStorm, then moving on to Dynamite, the saga lasted until 2012, with a total of 72 editions and a spin off, O Herogasm. In Brazil, comics arrived at the publisher To become, in 2010.

Created by the Irish Garth Ennis - known for his work on Preacher and Punisher-, alongside Darick Roberston, HQ is not afraid to be controversial or show strong scenes, presenting a different view of the Super Heroes, in a more realistic way. In this world, the so-called Super-Beings, with very few exceptions, are commercial and their actions are not guided by kindness, but by what guides everyone: fame and money.

With the freedom to do what they want, the groups formed by the Super-Beings become reckless, greedy and arrived on a spree. The consequences of their actions are enormous - but they are never the ones who pay for them.

Part of the population loves the Super-Beings, darlings of the media, and a part, which has generally suffered the aforementioned consequences, sees the reality behind all marketing. Thus, teams are formed like The Boys, which we follow in this comic. Led by Billy Butcher, the group is sponsored by the CIA, with the aim of putting heroes on the line. The first volume shows the formation of this team, which in addition to the Butcher, has Hughie Mijão, Breast milk, O French and the Female. To match the super powerful, this team usually uses compound V, which gives them some super powers, especially super strength.

Throughout the 14 volumes we had access, courtesy of Social Comics, the plot gradually grows, becoming increasingly critical. Abusing black humor and shocking scenes, Ennis points out problems in society that are no different from our current reality, serving, as in Preacher, as a slap in the face of the reader.

Little by little new details appear, showing the different motivations of the characters, explaining how the heroes were created and delivering deeper questions, such as psychological upheavals that go far beyond post-traumatic, are absurd and engaging. Justifying the 72 volumes launched, the script uses these questions to arrest the reader and pique curiosity, it is easy to start creating theories and trying to fit the pieces together, until a shocking revelation appears to confirm - or deny - the hypotheses.

The Boys is a great criticism of society. With a hideously realistic script and visually heavy scenes, the HQ presents interesting points, reinforced by the lack of modesty and exhibitionism of how they are shown.

Comics from The Boys, Prime Video's new series, are available in digital version at Social Comics

October 30, 2020 0
After the success of the Razer Invitational, competition moves to other regions calling on eSports competitors to represent their countries.

Wizards of The Coast hints at Magic: The ...

Review: Thor-In the Name of the Father

Review: Thor- The Rebirth of the Gods