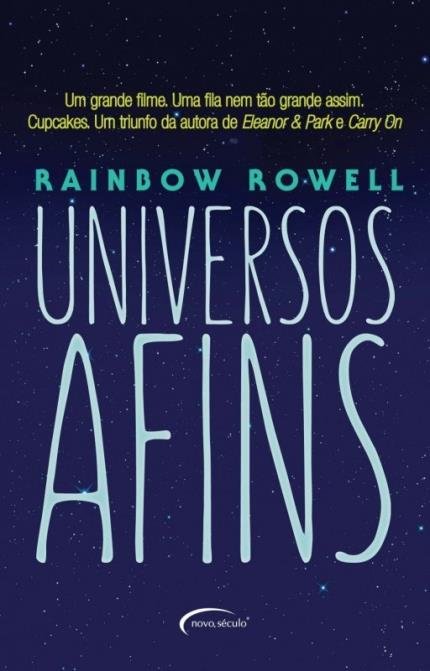 A book made from fan to fan. Not just a fan of Stars Wars, but a fan of anything. Only those who are fans understand the love they have for their idol - even if this is a film. That's what the tale Related Universes reports: the love of being a fan. The author of the story, Rainbow Rowell, is already one of the most consolidated authors in the publishing market. In Brazil, his books, so far, are published by the publisher New Century.

First published in 2017, Related Universes brings us a third-person narrative of Elena, a young fan of Star Wars who decides to camp in a row so as not to miss the premiere of the newest film in the franchise. However, on the days when the availability to guarantee a ticket and a place inside the cinema room - where the largest of the cinemas have seats marked at the time of purchase - the grace of being a fan, ends up dying.

It is for this purpose to rescue the fan side of Force, that the young woman joins Gabe and Troy, two completely mysterious boys who together form an "immense" and "lively" row of three. Not even when the local newspaper decides to do a story about the most fervent fans of Star Wars, the queue grows - it's not spoiler. Concerned about her daughter, Elena the guard constantly turns and turns, daily, in the block where the girl is camped. "Give up“, Says the mother at a certain moment,“i buy you tickets“.

The grace of being a fan is to camp for days or hours in such a queue. And make friends, which is the most important thing. And when the friendship is good, it remains over the years. Having other people, completely unknown and who in minutes, become the coolest in life, sharing the same love you have in a kilometer line - not in the case of Elena -, is something that only fans and only those who have already stood in line, you know.

Even the characters that the character goes through, the reader identifies himself as the reading progresses: the absence of a bath, the worst place and the worst way to sleep, cold, heat, hunger, boredom, are the feelings that the fan goes through when resolving camping days (or weeks, months) before the fateful event. This is precisely what Rowell rescues, with extreme nostalgia, obviously, from the moments when being a fan, it was worth it - it is noted that there was a “what” of nostalgia on the part of the author to remember, even in the current time in the skin of the young woman Elena, how cool it is to meet strangers in a queue.

There are 96 pages where the reader identifies with the saga of Elena, Gabe and Troy - and discovers that queues serve to bring together people who have lived together for years, but are not related due to countless life circumstances. He also discovers that in the case of cinema, it is preferable to decorate himself with t-shirts and figurative elements to accompany the premiere (or preview) of the film, without necessarily camping at the cinema door for days.

A fast, fun, brief and representative reading for fans of something or something. Related Universes it is one of those books, that certainly makes you want to keep it in a little pot It is a gift for anyone who is a fan of Star Wars or any other film saga. Or literary. Talk about friendship, about discovering new possibilities. Talk about being friends with those who already live with you without you noticing.

Talk about love - about loving someone or something. Talk about new loves. The ending will surprise you - and make you ask the author that as in Fangirl, continue where you left off (see Carry On and Wayward Son), because it’s not fair that we don’t know more about the parents of Elena, your friends, your friendship with Troy and your (possible) friendship with Gabe.