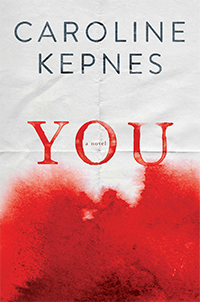 You. Here is a book that has a little annoying title to look for information on the internet. But well chosen by its author. The title is even a joke, since during its many lines, the number of times that this simple word is written has been lost. And that on many occasions seems to be the reader himself.

Initially focused on a stalker, Joe, who clings to Beck, the work ends up going far beyond that and looks at the psychological traits of all characters, from Joe’s obsessive behavior – who falls in love with just having some kind of love. Beck’s attention and begins searching for her on all social networks using just the name on her credit card during a purchase – even the young college students who spend most of their lives in the spree, chasing after failed relationships and using false arguments to draw attention.

Each of these characters has an important role in the plot, showing various faces of psychological disorders, which have now become common in society. Caroline Kepnes makes no mistake in introducing these people, bringing very well-built characters. Your personalities, or lack thereof, have a “what” of problems ranging from touch to obsession.

Of course, the focus is still on Joe’s obsession, which turns sick at various times and quickly becomes violent. It is at these times that the author’s narrative makes some slips. In many situations we realize that Joe is obsessive, that’s all, not a sociopath. However, Kepnes, who until then was showing a very well-explained picture of this disorder, contradicts himself and puts typical serial killer behaviors on him, such as constantly thinking about sex, and in these cases trauma is usually required to manifest such behavior, thing Joe doesn’t have.

Sometimes the reading gets a little confusing, because out of nowhere the profound behavioral analysis is over and Joe recounts the events quickly and over the top, as they are in some deaths. It is hardly incomprehensible, but it contrasts with the long scenes where he is impeccably preparing his actions, just to quote the outcome quickly and almost unthinkingly.

However, these are the only problems of the work. You immerse yourself in people who have obsession disorders, who live solely for the sake of others, and who end up harming them more than they do. Of course there is the detrimental thing in this story to those who are next to the character he is so obsessed with – and doesn’t want. Desire and obsession are treated as distinct forms, where wishing would end quickly in the first sex, but the obsession is not. The obsession keeps the person trapped inside, causing them to live inside a cubicle where only they and the person they want fit. Nothing else fits there. Not other people let alone dreams.

The disorder is so strong that it causes the individual to doubt himself, to the point of mutilation when his plans fail, because he feels unworthy when he thinks he has failed the other. Or chase her not just through the streets, but through social networks, picking up her cell phone and in other ways. Not wanting to know what she does, but who she will meet, talk to, or so many other things that pass through the stalker’s fertile imagination. This is all in such a justified way in the mind of the person who is convinced that he or she is helping, that it is frightening to point out that almost all of us have this behavior, even on a smaller scale.

In your mind, that person is always cheating on you, even if they have nothing.
And the author shows this not only through a man’s obsession with a woman. But in all relationships, even the best friend. And also the persecuted character, who has his own disorders.

You are a book that can talk about “you reader”, about problems that “you” have gone through or just a fiction. It’s by your way of interpreting. All this without taking the warning of the dangers of social networks and taking to the extreme the actions that a stalker can take to reach who he needs.

(Português do Brasil) Netflix | Veja as novidades no catálogo em...