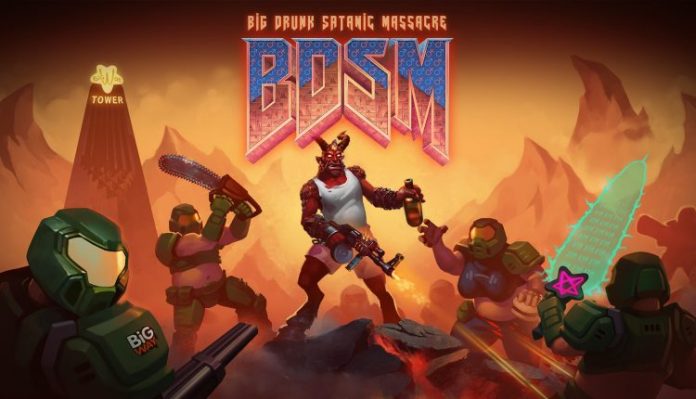 Not that there are no games in this style, but one where the enemies are humans, this is more rare.

In this game, with a very colorful look and a vision that resembles the classic Diablo, we control the devil to save hell from infestation from the worst evil that exists: human beings!

That's right! And everything based on milk. The game is very simple, with several references to other games like Halo, appearances of characters from famous animations like Family Guy, among many others.

The gameplay is to press the mouse button and shoot and walk around destroying and killing. And also talking to other NPCs to get tips and choose what to do. And depending on your choice, the game will end in 5 minutes.

Our version we received from the company, was for PC. The installation was quick and the game had no bottleneck during the gameplay. The commands were accurate. Like the dialogue, which is all in English, but with subtitles, it is completely understandable. Something that we can often only understand if we use a headset.

Big Drunk Satanic Massacre (Great Drunken Satanic Massacre) is basically a shooting game with strong RPG elements. The game itself takes place in Hell where the main character, Lou, has to find drinks and rescue the hottest Lover from the clutches of a fat clown. The game consists of four levels / chapters representing different areas of Hell, like the hellish fast-food cafe Big Wack, the Favela dos Esqueletos and Vila Mimosa. The idea behind each level is to kill specific bosses. Each boss represents a unique multi-stage fight and is quite challenging.

Another positive point is the character. He is charismatic in his simplicity in a mix reminiscent of Lobo (from DC), with certain hints of the best known demons and anti-heroes.

The game is being released today, October 10, for Playsation 4, Nintendo Switch and PC.

CD PROJEKT RED welcomes players from around the world with the official launch of Cyberpunk 2077 - the studio's latest open-world action and adventure RPG.
read more
Reviews

"I thought this was a party. Let & #039; s dance!" There's no better phrase to define Just Dance than the one in the movie Footloose. O...
read more

Review | Call of the Sea