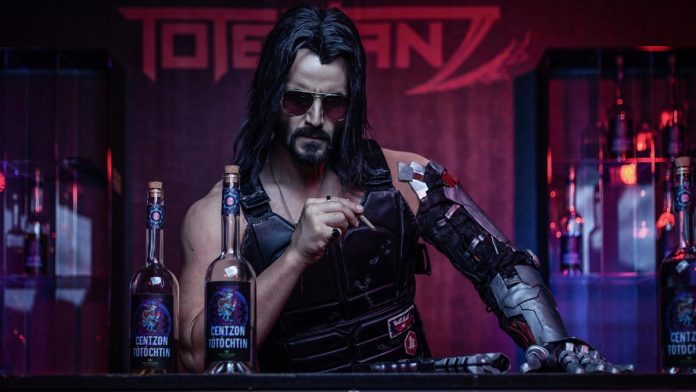 Cyberpunk 2077 is the most anticipated game of the decade. The title is expected since mid-2012 and since then fans of the “dirty” fiction genre kept an eye on each news, even if minimal about the title.

The Cyberpunk genre, for those who do not know, was born in the early 1980s, being a style that mixes high technology with low quality of life. It has always been a critical genre of our society, as can be seen in several books of Philip K. Dick, movies like Blade Runner, Akira, Ghost in the Shell, among others.

Returning to the game, he doesn't have an original script because it is based on the Cyberpunk RPG games created by Mike Pondsmith.

The game looks as expected, that is, all the dirt, pollution and technology used and old played in every gutter in the city. Unlike other styles - visuals - of fiction like Star Trek, where everything seems new and clean, Cyberpunk takes the player to experience the universe he is in, that is, it is as if none of that was new to him.

Being able to choose between the 3 life trails or Lifepaths, the player will assemble the whole past of his character that will resonate during the journey.

With no spoilers, the start of the game may seem boring and boring, but after the initial 40 minutes, everything will make sense and the boring will become as clear as a punch from a bionic arm making you see stars.

As always placed in the Cyberpunk style, the player will have to face a mega corporation that wants to dominate everything, here, the "soul" of the players. For those who already know the direction of this genre, it is nothing new, just being able to visualize and interact with characters that are as interesting as those of an RPG table.

And in this part, CD Projekt Red was happy, because Cyberpunk 2077 has several characters of the most interesting and fascinating ever created for a digital game. Here everyone wants something, either for their own benefit or that will bring benefits - their own - in the future. There are no people who think for the good of humanity, unless it brings an advantage to them.

Like any game, the downside is for artificial intelligence. The characters even do what is expected of them, but there are many bugs like some stuck in the wall, others frozen or the bots that end up more disturbing than helping, making the player often have to return to their mission.

Another part that makes the game negative is the player being able to go from house to house, like playing games Zelda, do what you want, how to steal and nobody notices or does something! In addition to the traffic without a single car, but you are hit by nothing. These are outdated AI errors that CD Projekt should work on as soon as possible.

These are many! Starting with the look that has already been described. Only this is a Cyber Punk game, and as the title says, Punk! So your trail had to be more than impeccable. There are 11 radio stations from Latin to Rock, with more than 150 tracks and news.

Positive is also the choice of who you want to be. If you choose to be a hacker, use your mind well and develop all of this art, but if you don't like it and prefer to be more "cool", there is no point in making improvements in mental cybertechnology. Here is like the RPGs, where the player must make his choices well and be smart, even if he has made the choice to be a thug.

During the story, secondary missions will appear, such as looking for or saving someone, solving problems, among others.

The game is not for children, period! The title is aimed at an adult audience due to its theme, in addition to almost explicit sex scenes and the menu of montage of characters where you should even choose the size of your genitals.

This choice may seem like an appeal, but during the game it becomes even comical, with NPCs who comment on it and play with your character.

So, if you are playing in a public place in your home, such as the living room, activate censorship mode and be happy!

Even with the bugs presented since its launch, Cyberpunk 2077 is a game that is worthwhile. It is fun, it has several interesting and engaging elements in its narrative. The challenge is above expectations and the title does not oblige you to make or follow an established script.

The CD Projekt has already expressed itself and made an apology soon many of the errors will be fixed, therefore, acquiring the game now or in the future, may not make much difference, if you don't mind the bugs.

Soon we will bring more Cyberpunk 2077 specials, keep an eye out!

The fourth season of the GWENT Day has started

CD PROJEKT RED announces the start of a new season of the GWENT Journey: The Witcher Card Game. Players can earn unique rewards by leveling up on all supported platforms: iOS, Android and PC.
read more
Reviews

The NAVE gamer notebook model LUNAR is a great choice for those who are looking for a fast and performance device to play their favorite games that require the machine.
read more
Special

Check out our guide and find out which lifepaths you can choose!
read more

Review: MuzArcade- A fun mobile game for those who like music