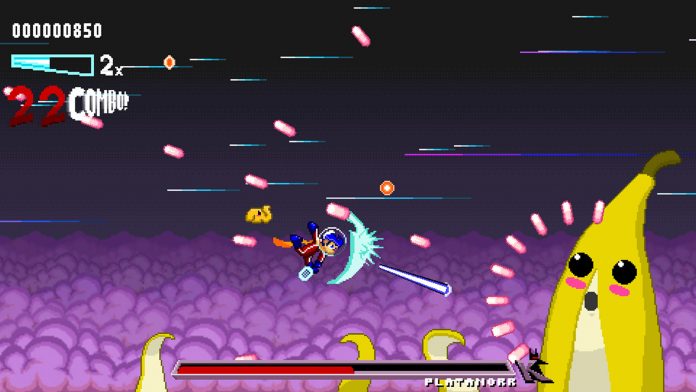 Sky Racket it's the first Shmup Breaker the world, mixing the classic genres of shoot 'em ups and block breakers. The objective of the game is very simple: blow the bullets back to the bad guys while flying over extravagant worlds full of frightening and vivid colors.

If you do not know the terms shoot 'em ups and block breakers, follows a very quick explanation. Shoot 'em up is a subgenre of electronic shooting games. On a shoot 'em up, the player's character engages in a solitary attack, often in a spaceship or aircraft, shooting at a large number of enemies and avoiding their attacks.

There are several games in this category such as side scrolling (from right to left) as Devil Engine, to the classics of arcades how Raiden, 19xx among others.

The block breakers, are simpler. As the name says, break the blocks. There are several games of this style, mainly on mobile.

Sky Racket is a game that mixes these two styles very well. Developed by the Brazilian Double Dash Studios, the game presents a view from right to left and in 2D with some 3D elements, the game is simple where you can play with the RacketBoy or RacketGril and face several opponents that appear on the screen and destroy the blocks.

Grab your laser tennis racket, a stylish scarf and your best friends to face a horde of cute enemies trying to blow you back to the ground.

Play as RacketBoy or RacketGirl, guardians chosen by the Capybara Goddess to save their galaxy from the paws of a tyrant's destructive genius, Korrg! Unable to attack alone, you must attack enemy attacks, turning the battlefield into an explosive space tennis battle. Rain the devastation of tennis on hordes of ducks, cat sandwiches, cute rabbits, space robot robots and real BANANAS in this unique and totally realistic adventure to save the galaxy!

There is no secret in the game. The characters go up and down, right and left, while using their rackets to finish off enemies.

By the way, enemies are very easy to be destroyed, unlike bosses, who can be more "thick shells", as in any game of the genre shoot 'em up. Here the big challenge is to have patience to dodge the rays and hit the ball back on the big boss.

The challenges are growing and each screen and Sky Racket becomes more interesting and exciting, less your soundtrack. Unfortunately the game lacks a track that you can't even notice exists, but nothing that gets in the way of the fun.

Sky Racket is a fun game to spend good hours in front of the screen in challenges that will make you test your patience and reflexes.

The moments that make Alan Wake worth a decade later.
read more
Reviews

Interstellar Space: Genesis is a turn-based 4X space strategy game in which you try to build a galactic empire developed by Praxis Games.
read more

Review | The Ninja Saviors: Return of The Warriors